Jessie Walton Barnett, Advocate for the Poor, Dies at 96 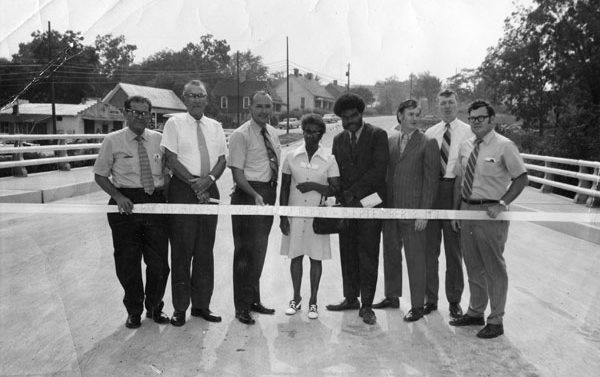 “She was small, but her voice was something big.” That is how Barbara Barnett described her mother, Jessie Walton Barnett, who died Jan. 24. Mrs. Barnett was born Christmas Day, 1913, just nine months after the death of former slave turned activist Harriet Tubman. The 96 years of Mrs. Barnett’s life were among the most transformative this nation has experienced.

She was the ninth of 13 children reared on a Wilkes County farm, and though the family valued education, she often had to stay home from the one-room schoolhouse to work in the fields or cook for those who did. She also was charged with helping raise the younger children, daughter Barbara Barnett said.

Anyone present at Mrs. Barnett’s funeral Jan. 29 heard the murmurs of praise, affirmation, pride and some of surprise, as the accomplishments and trailblazing life of Jessie Walton Barnett were recounted.

Family members spoke about her strength, spirit and the bowl of peppermints always on her dining room table. It wasn’t a service seeking solace for a life taken too soon. “I can’t say God cheated us,” said son James Barnett. “She was not only a mother to us” but to scores of others needing refuge, a meal or words of encouragement.

“She came to St. Joseph’s in the ‘60s,” said Deacon Jim Gaudin, “after Sacred Heart (Athens’ black Catholic church) closed. She was among the first to integrate this parish.” One daughter was the first African American to attend St. Joe’s school. “The children were not welcome at first,” Gaudin said.

“This parish has lost a great voice and advocate for the poor… She was a towering figure, a prophet,” he said. “She had a hunger and thirst for justice… She will not be easily replaced.”

The Rev. David McGuinness said Mrs. Barnett “was not in the grandstand. She was in the arena of life.” Her older children, Barbara Barnett included, were among the first group of blacks to attend Clarke Central High School.

James Barnett said he hoped people would continue to “carry out the legacy” because much needs still to be done. But consider the things she did. In the 1960s, Mrs. Barnett, with Evelyn Neely, Miriam Moore and Virginia Walker, formed the “Group of Four,” which made powerful stands in local politics on behalf of the black community. “Jessie would be at almost any meeting relating to the community, stand up, and say, ‘I’m Jessie Barnett and I represent the poor.’ And she did,” said Tim Johnson, coordinator of Athens-Clarke County Family Connection Partnership.

“My first day in Athens was Aug. 26, 1970,” recalled Paul Boumbulian, then a PhD student at Berkeley assigned to the Athens project. “One of [the Group of Four] said, ‘I guess we should show you East of Athens,’ and I said, ‘What’s that?’ and they said it was the part of the city cut off by the Oconee River.” The river formed a natural divider—with most whites on the west and mostly impoverished blacks on the east. The two sides of the city were linked only by a narrow iron bridge.

When he caught sight of the blight, Boumbulian said, “I was like Paul on the road to Damascus… There was no potable water, no paved streets and substandard housing… It was Third World. It was unbelievable.”

Evelyn Neely, 84, called her friend “a lovely, brave woman. If something wasn’t right, we worked on it… Jessie believed in what was right. She didn’t have black friends or white friends. She just had friends.”