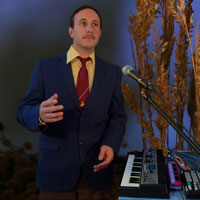 When Alexis Gideon turned out his first audio/visual oddity, Video Musics, in 2008, it was easy to see that there were entire worlds rotating behind his eyes. His DIY stop-motion animations and computer graphics were relatively crude but ambitious; his live presentation involved Gideon rapping along to his videos in a Houston-style, triple-time baritone and shredding Prince-style guitar leads.

Loosely based on Hungarian folk tales, the videos were notable for birthing the character of Brimstone Blaine, a futuristic alligator desperado (yep). But while a lot of artists have bold or wacky ideas, it’s the kind of ambition Gideon laid out in the following years that established him as a legitimate auteur.

In 2010, he unveiled Video Musics II: Sun Wu-Kong. The game had been exponentially upped: for the hour-plus psychedelic masterwork, Gideon had honed his skills as an animator, rapper and arranger. This time, the storyline was taken directly from Journey to the West, the great Chinese novel. A progressive rock scope was apparent, with recurring musical themes. Again, Gideon toured the nation, rapping along with his video.

This time, however, communities outside of the DIY circuit took notice. The Confucius Institute enlisted Gideon to perform his pop-opera for universities. The Regional Arts and Culture Council awarded him numerous grants.

For his new epic, Video Musics III: Floating Oceans, Gideon mined the works of Irish writer Lord Dunsany, but at this point the source material is almost moot. Gideon has grown from novelty act into full-blown renaissance artist. His music and videos are as singular in origin as they are inseparable in execution. While all of these projects are available as DVDs or recordings, seeing the man live, watching him work his words into the mouths of his clay creations, is a must. Catch him before he snags that MacArthur grant and retires to the islands.