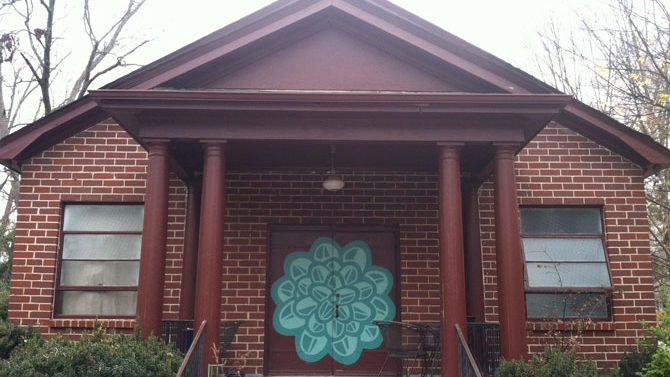 It’s a safe bet that if I’m not busy contemplating odd commercial signs, subversive cross-stitchery or failed subdivisions, I’m probably thinking about random paintings on the sides of buildings. So, when someone asked me to find out what the deal is with the chrysanthemums painted on, among other places, Athens Blueprint and the roof of the downtown Jittery Joe’s roasting facility, I eagerly agreed.

The woman behind the flowers, Lou Kregel, is not a graffiti artist, although her work might be mistaken for it. You won’t find her skulking in an alley with spraypaint-stained fingers, tagging some lost wall with big bubbly letters that no one over 40 can decipher.

Instead, Kregel is using her powers for good. Her hypnotic, repeating graphical patterns can be found all over Athens’ commercial landscape, tying together, for example, the decor at Ted’s Most Best, or livening up the atmosphere at Salon DM3. And in what has to be some kind of benediction for this article from the Post-Punk Universe, I also learned that Kregel’s art graced the cover of Sugar’s album, File Under Easy Listening, just as the closing track of Copper Blue (the band’s first album) finished playing on my stereo.

So, why is this accomplished fine artist spending her time painting flowers on buildings? It’s because she hopes that her exuberant, vivid chrysanthemums will positively influence the way Athenians see their town, and will inspire others to express their own creativity. If there’s an opposite of “vandal,” Kregel is it.

“It’s hard to resist the urge to make everything beautiful,” she  tells me, “but I always ask permission to paint on a building.”

An ideal spot for one of Kregel’s works is a neglected, unnoticed place, one that others may look at but don’t really see. Her art is a visual “WTH?,” surprising people with unexpected bursts of color and challenging them to look at familiar landscapes with new eyes. Thus, we have an abandoned church with a flower blooming on its doors, and a concrete-block loading dock sporting gaudy, cheerful petals. But why chrysanthemums?

“Feng Shui [the Chinese system of arranging buildings and interiors] says that chrysanthemums invite harmony and happiness into the home, so that’s why I chose them,” Kregel explains. “Also, they’re relatively easy to paint. That’s important, because I’m getting more and more people who want me to paint them in their houses or backyards.”

What started out as a way to help the owner of the Big City Bread building prettify the place has proven so popular that Kregel has painted about 35 of the mums for Athens businesses and homes. She says most people really like the flowers, theorizing that it’s their randomness that makes them compelling. “There’s no reason for them,” she says. “They’re just weird.”

Of course, her flowers also have their fair share of critics.

“This one guy I know, he moved in to a house that had a mum on the front door,” she says. “He hated it, so he put an American flag over it. Then someone stole the flag, so he put up a Jolly Roger. It’s weird, too, because he’s a gardener.

“Another time, I went to this plumbing shop to see if I could paint one on their building. They said no, they’d rather have an American flag.”

I ask her if she thinks that there’s an inverse correlation between liking American flags and hating giant technicolor chrysanthemums, and if so, what this could mean. She offers: “Well, maybe people think the chrysanthemums are too hippie-ish? Maybe they don’t want their customers thinking they like artists? I don’t know. Maybe the people who don’t like them are more conservative. But I don’t really think it’s any kind of political statement.”

I consider suggesting a new line of red-white-and-blue or camouflage chrysanthemums but fear that the collision of two opposing worldviews in a single image might cause an explosion, or a rent in the space-time continuum, or something. So, instead, I ask her more about Feng Shui. It’s one thing to paint your door red or hang up a mirror in your living room to encourage your own individual happiness and prosperity. Does she really think she can affect the fortunes of a whole town just by the strategic painting of mums?

“Well, people think, ‘I’ll organize my office according to Feng Shui principles, and then I’ll be really successful!’ But actually, what happens is those guidelines make it easier for you to get your work done, so, then, because of that, maybe you become more successful. I do think it matters,” she says. “I think it’s so important that your surroundings are beautiful. I grew up in Texas. It was so ugly and depressing. Seeing something beautiful affects how you think and how you feel.”

I ask her if there is any other public art in Athens that inspires her.

“I really love David Hale’s mural on the side of Sunshine Bicycles. And Kris Davidson, who painted the old Georgia Theatre. His patterns were so precise and exact. Athens is such a beautiful place because artists and other people who care have gone to the trouble to preserve what makes it beautiful. Like Michael Stipe, and his efforts to save the building where The Grit is. I want to do something positive for the community, too. Maybe it will inspire other people to get out and put their own art up. People who live here who have vision need to do something about it. We need to spend our time on things that will have an effect.”

Whatever one feels about the aesthetic value of Kregel’s flowers, it’s hard to argue with her contention that a town full of involved and passionate residents is a good place to be. Imagine the interesting mayhem and amusing lawsuits that would ensue if more of us followed her example, turned off our televisions and exorcized our artistic impulses in a public forum. I vote we find our creative voices and let them be heard. As the success of her public art demonstrates, there’s no good reason to remain mum.