RIP Alexei Leonov, the First Man to Walk in Space 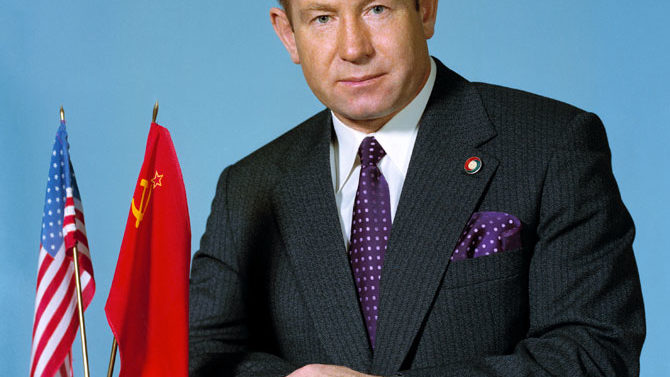 It was a cold and snowy Russian night as wolves prowled outside a spaceship. Inside the tiny craft were Soviet cosmonauts Pavel Belyayev and Alexi Leonov, who had landed far off course in a densely wooded area of the Ural Mountains after a harrowing but historic space flight in 1965.

Leonov, who died on Oct. 11 at age 85, had become the first human to leave the confines of his spaceship and float free in the airless void protected by nothing more than his spacesuit and a tether containing a communications line. Leonov’s space walk was one more triumph in a long line of Cold War “firsts” scored by Russia’s rocket scientists in the 1950s and ’60s—the first satellites orbiting Earth in 1957, the first unmanned rockets to the moon in 1959, the first human in space in 1961, the first three-man orbital flight in 1964. Russia and America were racing to the moon, and Leonov’s space walk was one more milestone toward that goal.

Leonov and his crewmate, Belyayev, were glad to be back on Earth, even though a rocky reentry into the planet’s atmosphere had caused the two men to land some 2,000 miles from their target area. The cosmonauts built a campfire but retreated back inside their ship after the wolves circled their hastily rigged campsite. More than a day passed before rescuers on skis could make their way to the cosmonauts stranded in the dense forest.

Even before their off-target landing, they had dodged disaster while orbiting their home world. Leonov’s ballooning spacesuit made it hard for him to fit into the ship’s airlock when he returned from his brief sojourn into space, but after much sweat and struggle, he finally made it back inside to the safety of the cabin.

Despite all its peril in orbit and on return, Leonov was still awed and ecstatic about his unprecedented space flight. “What struck me most was the silence,” he said of his time floating free in the sea of space. “It was a great silence unlike any I have encountered on Earth, so vast and deep that I began to hear my own body: my heart beating, my blood vessels pulsing, even the rustle of my muscles moving over each other seemed audible.”

Ten years after his historic space walk, Leonov was in space again when he and Valeri Kubasov rendezvoused in orbit with an American spaceship flown by NASA’s Tom Stafford, Vance Brand and Deke Slayton. The 1975 link-up of Russian and American spacecraft signaled a thaw in the cosmic Cold War, and to this day space fliers from Russia, the United States, Europe and a host of other nations live and work aboard the International Space Station high above Earth.

By a sweet cosmic coincidence, NASA astronauts Christina Koch and Andrew Morgan were outside the station on a space walk to perform routine maintenance on the sprawling station when the news came in about the death of Leonov, who had pioneered the extra-vehicular activity that enabled space travelers to visit the moon and build outposts in orbit around our Earth. “This is a bittersweet day for all of us on the International Space Station,” said station commander Luca Parmintano of the European Space Agency in tribute to Leonov.

Back on Earth, Stafford attended Leonov’s funeral in Moscow. Speaking in Russian, the 89-year-old Stafford eulogized Leonov as a “colleague and a friend” and said, “Alexi, we will never forget you.”

Alexei Leonov never forgot his flights into space. The friendships he forged and the wonder he felt on the risky road to space stayed with him all his life. He became an accomplished space artist, portraying views of the cosmos both real and fanciful. Like many who have flown in space, Leonov was struck by the beauty of our Earth as seen from the lofty vantage point of orbit. His impressions of the fragility of his home world are words that ring true today: “The Earth was small, light blue and so touchingly alone—our home that must be defended like a holy relic.”