‘Send Her Back’ and Trump’s American Fascism 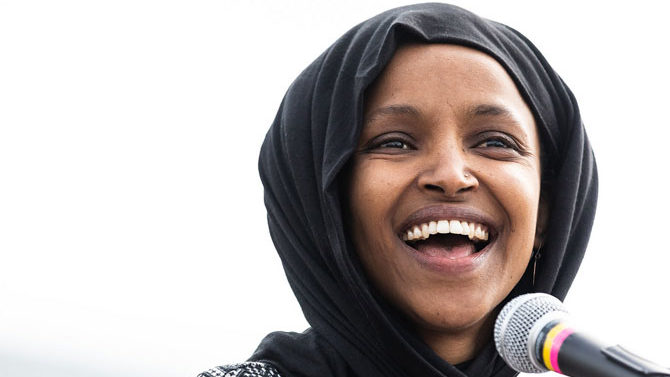 “Send her back! Send her back!” chanted supporters of President Donald Trump during a recent rally in Greenville, NC. The angry chant was a response to Trump’s tweets and statements this month against Minnesota Congresswoman Ilhan Omar and three other women of color on Capitol Hill. Omar, a Somalian refugee and an American citizen, is one of “the squad” of outspoken American black, Latina and Islamic female politicians singled out during some of the latest of Trump’s tirades.

Rep. Omar responded gracefully to the taunts and tweets of Trump and his sycophantic supporters, quoting lines written by acclaimed African-American poet Maya Angelou in 1978: “You may shoot me with your words,/ You may cut me with your eyes,/ You may kill me with your hatefulness,/ But still, like air, I’ll rise.” An editorial in the Charlotte Observer called the “send her back” chants at the predominantly white Trump rally “a dark reminder of who we are.” Mincing no words, the editorial said, “The chant rose quickly from a handful of voices to a chorus of bigotry. It was a chilling moment. It was ‘lock her up’ in a white hood. It was despicable.”

The Charlotte Observer said that racial and ethnic xenophobia and injustice are part of the history of this nation and the state of North Carolina, and that such displays of benighted bigotry “could be what’s coming to Charlotte next summer” when the city hosts the 2020 Republican National Convention. In 2012, I covered the Democratic National Convention in Charlotte with pen and camera as a columnist for the Athens Banner-Herald. During that convention, protesters were peaceful, police were patient and professional, and local people were friendly and proud of their city for hosting its first national political convention. Such may not be the case during the GOP convention in Charlotte next summer.

There is ugliness afoot in Trump’s America, and the stench of authoritarianism wafts across the land. In the 2018 book How Democracies Die, authors Steven Levitsky and Daniel Ziblatt wrote, “Behavior that was once considered unthinkable in American politics is becoming thinkable.”  The writers warned that Trump “cannot credibly defend democracy” when “existing and potential autocrats are likely to be emboldened with Trump in the White House.” In her book Fascism: A Warning, former Secretary of State Madeleine Albright last year said of President Trump, “We have not had a chief executive in the modern era whose statements and actions are so at odds with democratic ideals.” In a book-length collection of essays titled Can It Happen Here?: Authoritarianism in America, also published in 2018, editor Cass Sunstein said that homegrown fascism in America “has happened before. It will happen again. To many Americans, something like it is happening now.”

Sunstein’s anthology takes its title from It Can’t Happen Here, a dystopian novel of America under the heel of a fascist dictator who rallies his base of supporters with bellicose speeches, raging rallies, soaring promises and shifting facts. Written in 1935 by Sinclair Lewis, the first American to be awarded the Nobel Prize in literature, the novel is a cautionary tale that reminded readers during the Depression era that, at a time when fascism was on the rise overseas, there was also fertile ground for the seeds of a dictatorship to sprout right here in an America that calls itself “the land of the free.” Lewis died in 1951, but if he were alive today, he could find plenty to write about in the domestic demagoguery of Donald Trump, who on July 23 told an audience of young conservatives that the U.S. Constitution gives him “the right to do whatever I want as president.”

“Trumpery” is an old French word meaning useless showiness, nonsense and trickery. That word applies today to the regime of Donald Trump, as do the words against trumpery and tyranny uttered by American socialist, political prisoner and perennial presidential candidate Eugene Debs during a fiery speech in 1918: “In every age, it has been the tyrant, the oppressor and the exploiter who has wrapped himself in the cloak of patriotism, or religion, or both, to deceive and overawe the people.”