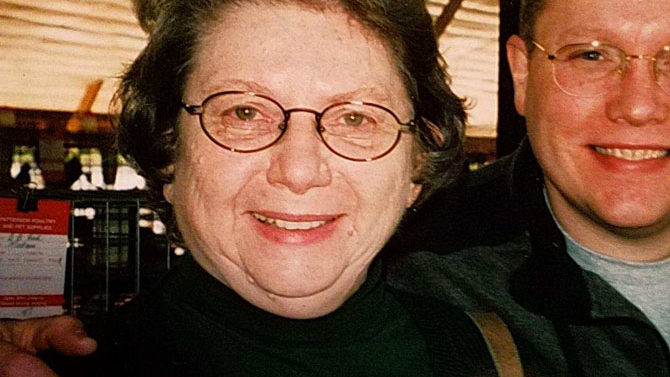 Reita Irle Rivers (Sept. 12, 1930–Jan. 2, 2020) was a wise woman from Wise, VA, who made her mark in Athens, GA. Born in Jenkins, KY, in 1930 during the Great Depression, she spent most of her childhood in Wise. Reita attended Virginia Intermont College and Radford State Teachers College and taught Spanish before working as a representative with the Silver Burdett textbook company in Atlanta. Reita formed a close friendship with her colleague Pat Haynes that proved fortuitous for the city of Athens. After the Haynes family moved to Athens in 1964, Reita followed suit in 1965. Her love affair with the Classic City began in the most tumultuous of times—the struggle for civil rights and equal rights for women and the Vietnam War protests. Reita Rivers embraced and fought for them all.

Reita enrolled in graduate school at UGA, taking classes in American history and journalism. A job posting at the student employment center caught her eye: “Personal assistant for Miss Jeanette Rankin.” Rankin, who lived part of the year in Watkinsville, was the first woman elected to the U.S. House of Representatives (from Montana) in 1916. Elected again in 1940, Rankin was the only member of Congress to vote against declaring war on Japan following the attack on Pearl Harbor. Rankin hired Reita, and the two became close friends and co-activists, marching together in 1968 in the Jeannette Rankin Brigade, a coalition of women’s peace groups, protesting the Vietnam War in Washington, DC.

Reita also took Rankin’s feminist mission to heart. The UGA Women Studies Program, created in 1977, was still on the horizon when Reita talked with Dr. Charles Crowe, professor of history, about the need for a class on American Women’s History. In the winter of 1973, Crowe taught an informal class on the subject to a small group of women, Reita among them. In August of 1973, the Athens Women’s Collective held “Woman Tide: An Alternative Symposium”. Reita spoke at this symposium, which sought to bring to light important issues for women that the “other” symposium, also held in Athens and awarded a National Endowment for the Humanities grant, neglected—women in prisons, women on welfare, sexuality, working women, the feminist media and lack of equal representation in mainstream media.

Though Reita never worked for a newspaper, ink ran in her veins. She had worked only for a short time as a stringer in Georgia for Joe Cumming at Newsweek. Ever mindful of the demise of independent newspapers throughout our land, Reita was a missionary for the importance of the free press. For decades, her morning ritual was to make a trek to the nearest newsstand, even when it got harder and harder to find one, and purchase both the Atlanta Journal-Constitution and the Athens Banner-Herald. Reita shunned the purchase of newspaper subscriptions, though it was often pointed out to her that they did indeed exist. She sought the immediacy of going out into the world for the news and having chance encounters at our dearly departed Barnett’s Newsstand downtown and later, the Five Points Waffle House or EarthFare about current events on the way home. The mornings of the publication of her beloved independent weeklies, the Athens Observer and, later, Flagpole were set aside to peruse every word on every page.

Her devotion to print media led to her involvement with the Popham Seminar, a yearly gathering in Athens in the 1980s and 1990s of reporters and social activists in the Civil Rights movement during the 1950s and 1960s. Johnny Popham, “Pops, the first New York Times reporter to cover the South in the 1940s, convoked these print journalists to have “no holds barred” discussions about issues facing America, in particular the issue of race. Will Campbell, Natalie Dupree, Jack Bass, Bill Emerson, Lee Anderson and John Egerton were often at the table. On the occasions when the discussions became anecdotal and truly “went South,” Reita could hold her own with these seasoned journalists.

Reita worked as Communications Director for the Sea Grant Program and Marine Sciences Department at UGA for over 20 years. Here, she was able to merge her vocation and avocation—supporter and promoter of the arts.  In 1979, she helped establish the Georgia Sea Grant Artists program to explore the intersection of art and science by commissioning artists to create works showcasing Georgia’s coastal world. Reita and Sea Grant co-workers, including Charlotte Ingram, toured the state in a van, exhibiting paintings and giving presentations at various cultural centers, including the Carter Center. The collection is now housed at the Georgia Museum of Art and features the work of many Georgia artists, including June Ball, Claire Clements, Art Rosenbaum, Alan Campbell, Judith McWillie and Marie Cochran.

Reita’s position with Sea Grant took her to Ossabaw, where she met Sandy West, the matriarch of the island which West’s family sold to the state of Georgia in 1978. Reita and Sandy proved to be kindred spirits, both lovers and advocates of the arts and the Georgia coast. Reita was a driving force behind an art auction held in Athens in the 1990s to help Sandy with the enormous bills of her home on Ossabaw. Annemarie Reynolds, who sold Sapelo to the state of Georgia in two separate transactions in 1969 and 1976, became a close friend. Reita, Sandy, and Annemarie formed an informal island alliance, which benefited Georgia’s coastal preservation efforts.

Reita was a human connector; it was one of her greatest gifts. She brought about both the likeliest and the unlikeliest couplings of talent and ideas in people from all walks of life and in all generations. One need only look at her bookshelves, her walls, her pottery collection and the stacks of political pamphlets and local papers on her table to see how engaged she was in the local community. Every item she owned had a personal story attached to it; that was its value to her.

Reita Rivers was “thinking globally and acting locally” long before it became the catchphrase it is today. She devoted her life to making our town, our country and our world a more humane place to dwell. We are grateful.