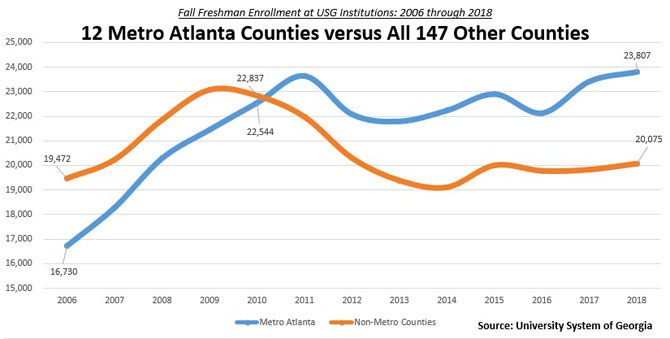 Editor’s Note: This is a slightly condensed version of longtime political observer Charlie Hayslett’s latest post to his blog, Trouble in God’s Country, a source of informed commentary about the rural/urban divide in Georgia. Read this post in full and all the others here.

First, props where they’re deserved. Georgia Gov. Brian Kemp actually took a step in the right direction last Monday when he told the AJC that he’s creating a “rural strike team” to try to stimulate economic development in the state’s dying hinterlands. The state of Georgia is quite literally in the process of tearing itself apart along rural and urban lines, and especially between metro Atlanta and just about everything else from Macon south. These are not slow-moving trends. No matter how you come at it—economically, educationally, health-wise, politically—you can pretty much watch the division in real time.

Take education as an example. In 1970, according to Census Bureau data, there were fewer than a quarter of a million college graduates in the entire state of Georgia, and slightly more than half of them lived outside Trouble in God’s Country’s 12-county metro Atlanta region. Today, the state is home to nearly two million college graduates, and 63% of them live in metro Atlanta.

These differences matter. Not only do they fuel metro Atlanta’s outsized economic growth, they drive widening disparities in taxes paid and social services consumed. With just under half the state’s population, metro Atlanta in 2016 coughed up nearly two-thirds of the state’s federal taxes while consuming, as examples, about 37% of the state’s Medicaid services and about 41% of its food stamp benefits.

You can do the math on the other side of that equation. Oh, OK, I’ll help: The 99 counties that constitute Trouble in God’s Country’s Middle and South Georgia regions don’t even come close to covering their own Medicaid and food stamp costs, let alone anything else. After a while, these kinds of numbers get to be politically untenable. What do you do about it? I’d offer the following as a running start at an answer.

First, the multi-agency approach suggested by Kemp is the right idea—and critical. The state of Georgia arguably has one of the strongest and most sophisticated economic development infrastructures in the nation, but my sense is that its work has been largely siloed and not well integrated with other departments and agencies of state government. The state’s urban-rural divide and the deterioration in much of rural Georgia constitute a truly strategic problem. It’s not an exaggeration to call it an all-hands-on-deck crisis. In addition to the departments of Economic Development and Community Affairs, the team will have to include high-level engagement from throughout the state’s education bureaucracies and, I’d argue, public health and human services.

Start with a realistic evaluation of the state’s various rural areas. Some politicians like to say they want to run government like a business. In business, if you’re losing money year after year, sooner or later you call it quits. Under that theory, I can take the governor to 50 or so counties where he ought to turn out the lights and call it a day. We can’t do that, of course, but it ought to be possible to invest discretionary tax dollars and other public resources in areas that at least have a fighting chance of generating a return, in terms of new growth and economic prosperity.

Shore up the regional hub cities first. It’s not just Georgia’s purely rural areas that are in serious decline; a lot of the major regional cities—Macon, Columbus, Augusta, etc.—are suffering various types of distress, and they are vital to rural areas around them. As a practical matter, it may be too late to do much good for Albany and the rural counties between it and the Alabama line; that entire region of the state is bleeding population and shrinking economically to a degree that may put it beyond near-term salvation.

Challenge the rural areas to compete for the state’s attention and dollars. Hopefully, one of the initiatives that will come out of Kemp’s effort will be a process by which multi-county regions or areas of the state can apply to the state for funding and technical support. It shouldn’t be entirely on Kemp’s strike force to show up in Enigma, GA, and say, “We’re from state government, and we’re here to help you.” Rural areas should be required to come forward with a rational vision, demonstrate that they have the leadership capacity to drive a major effort and put serious skin in the game.

Bite the political bullet and implement Medicaid Expansion. I should have listed this first but figured Republicans would stop reading right then and there. Refusing to take advantage of Medicaid expansion was the major failure of Nathan Deal’s administration, and Kemp shows little inclination to do any better. His attempt at a “waiver” approach (an all but transparent effort to deny Barack Obama any credit for the program) apparently can’t even pass muster in Donald Trump’s Washington. Meanwhile, rural hospitals continue to close and people continue to die, prematurely and unnecessarily. Even if Deal, Kemp & Co. are blind to the health benefits of Medicaid Expansion, you’d think they’d see the economic benefits of pumping billions of dollars into rural Georgia. Maybe all things Obamacare still constitute a third rail of politics for Georgia Republicans, but my hunch is that the radioactivity levels tied to Medicaid expansion have diminished to a point that it could be a political winner for Kemp—a Nixon-to-China sort of moment.

Again, I don’t know whether Kemp’s ”rural strike force” will prove to be anything more than eyewash and window dressing, but it’s encouraging that he’s taking a stab at the problem. Hope springs eternal.