Ossoff And Warnock Have Likely Built Up Early Leads

The Rev. Raphael Warnock walks down Washington Street to a rally for his Senate campaign.
by Charlie Hayslett December 30, 2020

Will They Be Enough To Withstand Republican Votes On Election Day? 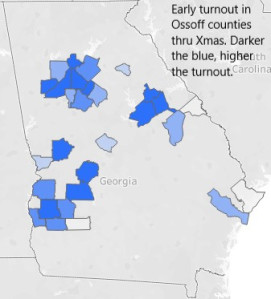 Heading into the final week of early voting, Georgia Democrats appear to have crystallized several foundational advantages that could put challengers Jon Ossoff and Raphael Warnock within striking distance of incumbent Republican U.S. Senators David Perdue and Kelly Loeffler in their tag-team match for the state’s two Senate seats and control of the United States Senate.

Indeed, TIGC’s analysis of a wealth of early voting data available primarily from Georgia’s Secretary of State and the website http://www.georgiavotes.com strongly suggests that Ossoff and Warnock have already banked healthy leads in early mail and in-person voting — and, perhaps more worrying for Perdue and Loeffler, that GOP fears of a drop-off in votes from voters whose primary loyalty was to President Trump may well be materializing. If Perdue and Ossoff are holding the same county-level vote shares in the runoff they received in the general election, Ossoff has banked an early-vote lead of nearly 42,000 votes so far. What’s more, two-thirds of the nearly 528,000 absentee mail ballots that have yet to be returned are in the hands of voters in the Ossoff counties. If all those ballots are returned and the general election vote-shares hold for them as well, Ossoff’s early vote lead would swell to more than 93,000.

Roughly the same would presumably hold true for the Warnock-Loeffler race, but it’s impossible to conduct the same kind of vote-share analysis for their race: they earned their places in the January 5 runoff by emerging as the top two vote-getters in the multi-candidate, non-partisan “jungle primary” that was held in conjunction with the November 3 general election. However, the limited public polling that has been conducted suggests that the two races are indeed running pretty much parallel with one another — that, in fact, Warnock may be doing slightly better against Loeffler than Ossoff is against Perdue.

This is not to suggest that the Democrats are on an easy glide path toward certain victory. President-elect Joe Biden had piled up a mail and early vote advantage over Trump of nearly 230,000 votes here in Georgia — and nearly saw it wiped out when Trump ran up a 220,000-vote margin on election day. But it does seem that the Democrats have muscled up in a couple of key areas that could make the difference on January 5.

Probably the most significant foundational advantage the Democrats can currently claim is in voter turnout. Through the most recent county-level early voting data reported by georgiavotes.com, the 28 counties that sided with Ossoff in the general election — all the state’s heavily populated urban counties and a smattering of heavily black rural counties — were turning out a higher percentage of registered voters than the 131 mostly rural counties that went for Perdue. As of Sunday’s data, 29 percent of registered voters in the Ossoff counties had already voted in person or by mail versus 26.8 percent in the Perdue counties — an advantage of more than two points in a category historically dominated by Republicans. More than 30 percent of registered voters have already voted in such Metro Atlanta behemoths as Fulton, Gwinnett, DeKalb, Douglas and Rockdale counties.

Perdue, meanwhile, is having to rely on the state’s rural counties, and so far they have been falling further and further behind over the course of the early voting process. A couple of clusters a dependable Republican counties — Oconee, Greene, Morgan and Putnam in just east of Metro Atlanta and Union, Towns and Rabun on the North Carolina line — are already in the high 30s and, in a couple of cases, the low 40s. But the vast majority of counties that supported Perdue in the general election are still lagging badly behind in the mid- and even low-20s (those in pale pink on the map at left).

The largest recent poll available — a SurveyUSA poll conducted just before Christmas for WXIA-TV — aligned with TIGC’s analysis of the early voting data in several ways, including especially indications that fervent pro-Trump rural voters may not come back to the polls to support the incumbent Republican senators. The SurveyUSA poll of 691 Georgia registered voters included a battery of questions focused on whether or not they actually intended to vote in the runoff and found that about 11 percent planned to stay home.

That cohort of avowed non-voters included some Democrats and independents but was made up more heavily of Republicans who supported President Trump, and it was clear they had heard his complaints about the election being rigged against him. Fully 42 percent of the rural GOP voters who planned not to vote said their decision was based on a belief that “the voting process is rigged.” Further, the SurveyUSA poll found that the number of Atlanta area voters who planned not to vote in the runoff was about half the percentage in northwestern and southeastern parts of the state (about three percent in Atlanta versus six and five percent, respectively, in in SurveyUSA’s northwestern and southeastern regions.)

This SurveyUSA finding of dampened enthusiasm among Trump supporters squares with the picture emerging from the early voting data so far, including the map above of the Perdue counties. In addition, georgiareports.com’s latest slicing of the early voting data by congressional district underscores the picture that emerged from the county-level analysis discussed above: the five Metro Atlanta congressional districts held by Democrats are turning out at significantly higher levels than those held by Republicans. For those five Democratic-held districts, the turnout rate as of Sunday was 31.3 percent, higher by several points than any of the state’s Republican-held district. Indeed, it was exactly 10 points higher than the turnout than for Georgia’s 14th congressional district in the northwestern corner of the state, which was just won by Qanon devotee Margaret Taylor Greene and was one of the last places in the state where Trump personally campaigned.

With a full week of early voting and the January 5 runoff still to go, these numbers could of course change. Indeed, TIGC’s vote-share analysis and projections could simply turn out to be wrong. If so, however, that would represent a dramatic departure from voting patterns and trends that have been developing and firming up over the past decade or so of election cycles. And, while few obvious straws in the wind seem to be blowing the GOP’s way right now, it needs to be said that Ossoff and Warnock still have strategic soft spots as well: they are, in particular, still not getting the vote production they need out of heavily black urban counties like Dougherty (18.8 percent); Chatham (19.7 percent); Richmond (21.5 percent); Bibb (24.2 percent); Muscogee (24.6 percent), and Clayton (25.9 percent).

Still, it seems likely Ossoff and Warnock will head into the runoff with a lead in the early and mail votes. Whether it will be sufficient to withstand the traditional Republican election day turnout advantage remains to be seen, and is the question that will grip the state — and much of the nation — for the next 10 days.

Ten Top Stories From the 2010s in Athens