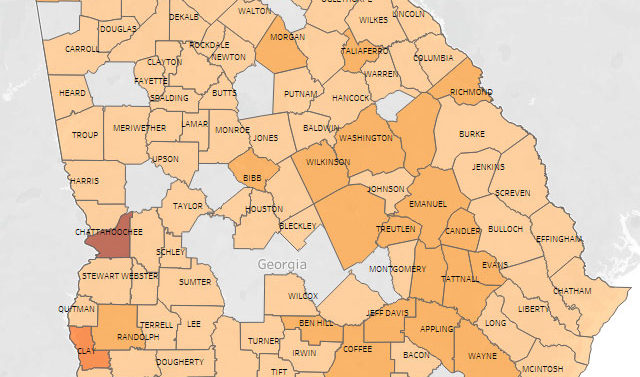 That’s certainly true here in Georgia. In fact, case rates are currently growing faster in rural counties than in major metropolitan centers, and rural areas by and large now have higher case rates.

To put this in perspective, Georgia is now one of 21 states accorded the dubious honor of being a Covid-19 “red zone” by Birx’s White House task force. That group recently began assigning that designation to states that meet one of two criteria—first, that the number of cases per 100,000 people rises by 100 or more over a seven-day period, or, second, that the “positivity rate” is higher than 10%.

Georgia makes the cut on both counts. Its cases and case rates have been rising relentlessly pretty much since the pandemic started, and its positivity rate has been floating above 10% for several weeks. Tuesday’s report (Aug. 4) from the Georgia Department of Public Health (DPH) puts the cumulative positivity rate at 11% and the rate for the batch of tests reported yesterday at 12.7%.

As of Tuesday’s report, 141 of the state’s 159 counties qualified as red zones in their own right, as the map is intended to show. Each of the shaded counties posted increases of at least 100 cases per 100,000 people over the past seven days; the darker the shade, the bigger the increase. (The blank spots on the map represent the 18 counties that held their case rate increases under the 100-per-100,000-people threshold over the past seven days.)

One key story for Trouble in God’s Country is that Covid-19 is continuing to move tsunami-like across rural east-central Georgia. TIGC first reported in early July that the bug seemed to have finished savaging southwest Georgia and appeared to be moving, Sherman-like, eastward to the sea. The latest results make it clear that march is still underway.

Fifteen of those 29 counties are part of a connected chain covering much of east-central Georgia, an area that largely seemed to escape the bug in its earlier phases. It runs more than 150 miles from Richmond County at its northern end to Atkinson County at the southernmost point.

And the case rates in most of the counties in that chain now dwarf those in Metro Atlanta. Such counties as Jeff Davis, Jefferson, Wayne, Toombs and Johnson, among others, have case rates of well over 2,000 per 100,000 people. The county with the highest case rate in Metro Atlanta, Gwinnett, has a current case rate of 1,874.18. Indeed, generally speaking, the smaller a county’s population, the bigger its recent increase in Covid-19 cases. The 118 counties with populations of less than 50,000 people posted bigger increases in case rates than any of the other groups of counties with larger populations.

Interestingly, it was the mid-sized group of counties—16 counties with populations between 50,000 and 100,000—that posted the smallest increases (although those increases still qualified them for “red zone” status). There is no doubt a variety of reasons for this, but a couple of possibilities suggest themselves. One is that the group includes counties—like Dougherty and Floyd, among others—that suffered most of their damage in the early days of the pandemic, and their recent increases are relatively smaller. A second may be that many of these counties—Barrow, Walton, Jackson, Coweta and others—are in various stages of evolving from rural to exurban or suburban counties and have reached a stage where they can attract and sustain stronger health care delivery systems.

Charlie Hayslett is mostly retired from careers in journalism and in public relations and is author of the occasional blog, “Trouble in God’s Country,” troubleingodscountry.com.