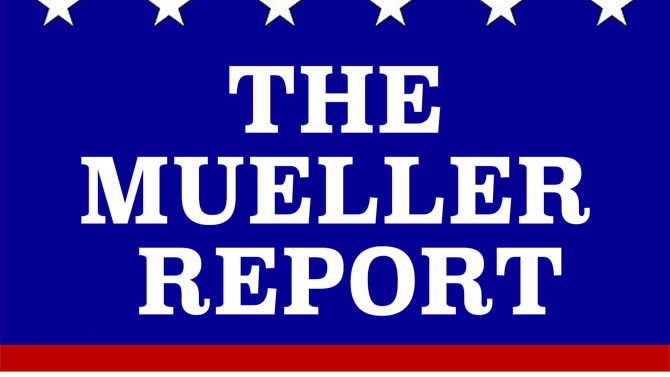 Well, our old G-Man war hero, who has spent his life in the service of our country, failed to deliver us from Trump—or did he? His answer to a day of questioning was, “Read the report.” The report clearly and convincingly details how the Russian government intervened in our 2016 election to make Donald Trump president of the United States. The report also describes the actions that Donald Trump took to try to end the investigation that resulted in the report.

And nobody has read the report. It’s as if nobody has read the Bible and only knows about it from what other people claim is in it. Well, probably it is exactly like the Bible, which most people let their leaders tell them about, rather than reading it for themselves. So, you know, “Blessed are the jerks, for they shall inherit the earth—trust me.”

Considering the damage that the plutocrats have already done to our government and our nation through Donald Trump, it is terrifying to think that we must take the long view. But remember how difficult and unusual it is to defeat an incumbent president. Realism suggests the strong possibility that Donald Trump can be re-elected. At the present moment, the Democrats are divided, with nobody looking like she or he can beat Trump. He has unlimited financing to attack whatever candidate runs against him, and he has a base that has shown it will support him no matter what he does, no matter how vile, sexist or racist he becomes, no matter how much he unbalances the budget, no matter how much he corrupts the concept of democratic government, no matter how many incompetent and crooked cronies he appoints—no matter what, Trump is golden as his toilet.

And yet, in 1972, we faced incumbent Republican president Richard Nixon, a much smarter and more knowledgeable president than Donald Trump, and just as ruthless in his own way, who manipulated the Vietnam War for his political advantage and played upon the prejudices of the South. With great fervor, we disdained more moderate, middle-of-the-road Democrats and nominated the liberal war hero, Sen. George McGovern. Nixon won every state but one in a landslide, confronting us with the grim prospect of four more years.

Watergate had already occurred. The press was writing about it, but few grasped its importance, and Nixon’s invincibility seemed unthreatened by that break-in at the Democratic Party headquarters. The press continued to investigate, and gradually the extent of Nixon’s involvement and the magnitude of the cover-up came clear. Within two years, Nixon had resigned to escape certain impeachment and conviction.

Any parallels between that long-ago time and now? Maybe only the reminder that seeming invincibility can flip mighty quickly when wrongdoing is covered up and then comes to light. Oh, and the importance of the free press and its determination to keep on digging, no matter how much it is stonewalled, denigrated and threatened. And the Mueller Report is just lying there, as seemingly innocuous as a “third-rate burglary.”

The Watergate break-in was conducted for the purpose of tapping phones and photographing files in the Democratic campaign offices. The Russians can now do much more than that from Moscow. And they did, and they’re still doing it. And the president and the Republicans block all efforts to combat the Russian influence.

The Mueller Report spells it all out: the Russian moves that gave Donald Trump his slim victory, and Trump’s moves to shut down the Mueller investigation. It’s all there in the report. Call Mueller “Deep Throat,” for he has pointed us toward the obstruction as surely as that other FBI man guided the reporters who blew up Nixon. It took a long time back then for everybody to understand the importance of what they were writing. It’s taking us a long time now to understand that Mueller’s performance on TV is not the point. The point is in the pages of his report, and, as he said, “Read it.”