A Steep Path to Climb Against Cancer

My nephew has published a book about his ordeal with throat cancer. (Surely, nobody is still reading after that opening sentence, but it’s OK, because he’s not trying to sell books.)

When the diagnosis came back that cancer had him by the throat, Drew Boswell was told that the survival rate is good and that the treatment is bad. He just didn’t know how bad. 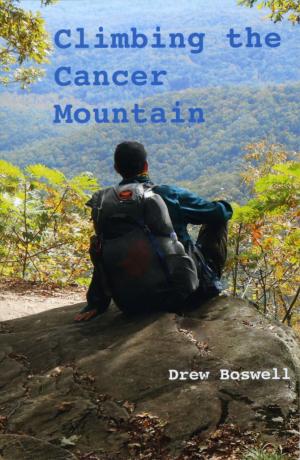 Climbing the Cancer Mountain is not a self-help book or a self-pity book. It is one middle-aged man’s attempt to exorcise a year of chemotherapy, radiation, mouth sores, nausea, weight loss, pain and debilitating weakness.

What makes this book interesting, even if Drew is not your nephew and you hate reading about cancer, is that he has always dabbled in writing and knows his way around a keyboard. He is a loner, a runner, a wilderness hiker, a martial arts competitor and a Zen practitioner. He is also a quality-control engineer. He is a man accustomed to being alone, testing the limits of his strength and measuring results.

Telling the story of his chemically induced counterattack against the disease, Drew uses examples from his solo hikes, his hand-to-hand fights and his marathon running, so that we see not just a guy with cancer, but a friend we’re getting to know through his revelations of himself. He keeps charts and graphs of his weight-loss, his treatments and the liquid nourishment he is able to ingest.

“To shamelessly steal a phrase from Alastair Reynolds, I have been borrowing strength from my past. Now, cancer treatment is claiming that debt in the form of an all-enveloping fog of fatigue that cannot be alleviated by any amount of rest or sleep. I’ve been tired, uncomfortable, even gasping and wheezing on long runs, difficult sparring matches or the end of 16-mile hikes; but this cancer tiredness is new territory, and I don’t like it one bit.”

Unless you’ve had cancer or know somebody who has had it, you don’t know what all it entails. You can’t really know, of course, unless you’ve had it yourself. Drew takes you along with him as his head is bolted to the table for the radiation treatments; he lets you sit with him as the chemicals drip into his veins, and if you want, you can kneel with him as he vomits, cry out with him as his mouth festers with sores and shiver with him as he curls up under his electric blanket, too weak to do anything but stare at the wall.

You can, obviously, hang on with him as he finally makes it through the treatments and begins to be able to take in some sustenance other than liquids. Who knew that grits can be fixed so many ways?

“What I’m proposing to do is simply use the same mental muscles I use to study and learn about running or hiking or martial arts or Zen and apply that strength to my cancer fight. In that way, I make my cancer treatment and recovery more than an interruption of my life, an irritant to be gotten rid of. Instead, I will treat it as my one and only path that I have to walk. Cancer treatment and recovery, formerly an enemy to fight, can now become a way, a path. If I concentrate on treatment and recovery in the same way that I’ve learned to concentrate on and obsess over more pleasurable passions like running, martial arts, hiking or Zen, then I’m at least on familiar ground. I can climb the cancer mountain the same way I can climb Springer Mountain, by walking the path in front of me.”

You can get to know Drew at his YouTube channel under his nom de plume, Sidney Hornblower. He self-published Climbing the Cancer Mountain on Amazon, and it’s available there as an ebook or as a paperback. It’s a good read, in spite of its subject matter. There’s even the attraction for horror fans, since this is a meticulous account of a man turned into a zombie, a runner who can barely survive the shuffle to the mailbox and back.

Mountain has all the elements of a good story: if not the human heart in conflict with itself, certainly the human body, and the will not only to endure but to prevail.