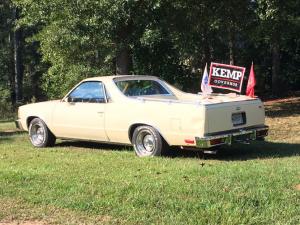 As usual, most of this stuff should not be shoehorned into the Georgia Constitution, a document that has already been amended more than Brett Kavanaugh’s high school yearbook. Also as usual, it is impossible to know what these amendments actually accomplish, if you only read the summary concocted by the secretary of state (you know who). In fact, even after you read the full amendments as put on the ballot by the Georgia General Assembly, they’re still difficult to understand. 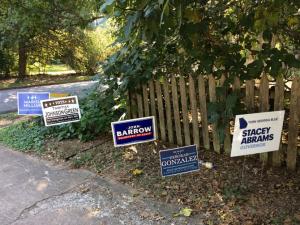 Make Georgia Great Again, like it was when the above Chevy El Camino was new and the Democrats were in charge. But wait: They were the same crowd that’s Republican now. Maybe we should just vote for the new breed of Democrats, who are not living in the past.

No. 1 permits the state to allocate money from sporting goods sales taxes to a fund to aid conservation of our natural resources. Sounds like a no-brainer, even though it will still be up to the legislature to devise legislation that makes it happen. Our Rep Spencer Frye was one of the sponsors, so we can vote yes and thank Spencer for looking after our environment.

No. 2 sets up a statewide business court system, with judges appointed by the governor and approved by the legislature—a departure from our usual procedure of electing judges (except that they’re frequently appointed by the governor to fill vacancies that always seem to happen between elections). The state chamber of commerce is in favor of the amendment, but the need for the courts is unclear, and the proposed system would be expensive and duplicative of our present system of superior courts. I’m going to vote against this amendment, but I’m only a businessman, not a lawyer or a judge.

No. 3 changes the assessment for timberland with the stated purpose of making it easier for owners to hold onto it for conservation purposes, rather than being forced to sell out to developers because of high taxes. The amendment also provides for the reimbursement of local governments that may lose tax revenue because of the implementation of the amendment. Sounds OK to me, as long as there are still enough trees to cut down for newsprint.

No. 4 would provide a constitutional guarantee of crime victims’ right  to remain fully informed about court proceedings concerning the accused in their cases and the right to be heard at hearings and to be informed when the accused has been released or has escaped. This amendment would strengthen rights already guaranteed under Georgia law. Sounds good.

No. 5 assures that in political jurisdictions where there are two or more public school systems, the larger one can call for a sales tax referendum, and the smaller one can share in the proceeds on a per capita basis. This one doesn’t apply to Athens, but it regularizes relations between school systems that have proven bumpy in some places.

There are also two referenda on the ballot.

Referendum A seeks to limit property tax increases in Atlanta. I don’t really understand it, and you don’t have to vote for or against it.

Referendum B is equally arcane, but it seems to help people running nonprofit homes for the mentally disabled and is worth voting for, as I see it.

You already know which candidates to vote for. Now, go vote!