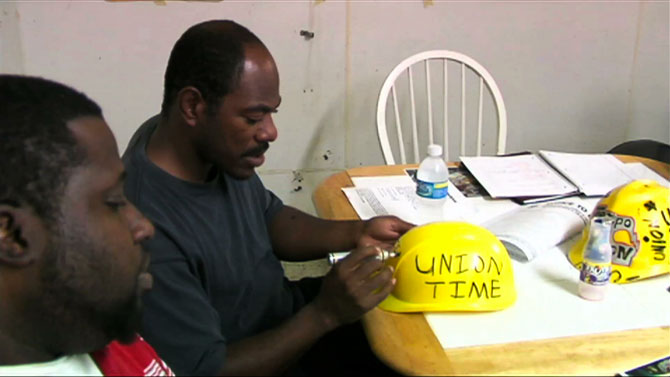 We tend to think of the university as the place where people with graduate degrees and guaranteed employment know much about history, about biology, about a science book and the French I took. Except for the workers who keep their offices and classrooms tidy and their campus planted and trimmed, we don’t expect these academics to interact with people who work with their hands, except their graduate assistants, of course—another form of indentured servitude.

Come to find out that the University of Georgia is hosting a conference on “Dirty Work,” which is all about labor in the South—past, present and future. This is the biennial gathering of the Southern Labor Studies Association: scholars, students and activists who are focused on the work people do and the lives they lead. Most of the May 17—19 conference at the Richard B. Russell Library and other locations is for the paying attendees, but there is also an impressive lineup of speeches, discussions and films that are free and open to the public. (See below.) For $90, you can attend the whole thing, whether or not you have a PhD.

You want history? Dig this keynote presentation: “Heard it on the Grapevine: Slave Labor, Mobility, and Power in Antebellum America.” Or another one on the new book, The Legend of the Black Mecca: Politics and Class in the Making of Modern Atlanta.

But wait, there’s more. “Participants include many prize-winning authors, including Dartmouth professor Rashauna Johnson, the author of Slavery’s Metropolis: Unfree Labor in New Orleans during the Age of Revolutions; Brian Kelly, from Queens University Belfast, the author of Race, Class and Power in the Alabama Coalfields; and LaGuana Gray, author of We Just Keep Running the Line: Black Southern Women and the Poultry Processing Industry.

“Two authors of the multi-prize winning Like a Family: The Making of the Southern Cotton Mill World will participate as well as novelist Wiley Cash, whose forthcoming book tells the story of Ella May Wiggins, singer, spinner, single mom, and martyr of the 1929 Loray Mills Strike in Gastonia, North Carolina.”

This is a really big deal for Athens, and it’s not the kind of stuff you expect to encounter at a Southern university. This is not moonlight and magnolias, in case you think that’s what Southern history is about. This is down and dirty.

“The legacy of labor in the South has shaped not just our region but many parts of the world,” says Cindy Hahamovitch, B. Phinizy Spalding Professor of History at UGA. “This is an unprecedented event for Athens. Anyone interested in working people past and present will want to attend.”

The topics seem endless: “Building Unions at Southern Public Universities,” “Coal Dust Capitalism,” “Black Women’s History As Labor History,” “‘We’re Basically Livin’ Here!’ Speedups, Slowdowns and Time-Work Discipline at the Poultry” and “Transforming the Dirty South: Land Use, Labor, and the Racial Politics of Southern Industry.” This is just a sample of what’s going on, just to give you the flavor.

Now, let’s look at the free stuff that’s open to the public, beginning with a roundtable discussion in Room 285 of the Russell Library, Thursday, May 17 at 1:30 p.m. on “Building Unions at Southern Public Universities.” Friday, May 18  in Room 285 at 1:30 p.m. is a talk, “The Dirtiest Work of All,” about human scavengers in India. There’s an all-day film festival Saturday, May 19, starting at 8:30 a.m. in 241 Russell Library, with topics like union organizing, treatment of gay and lesbian students at the University of Florida, and standards for temporary workers. The last event Saturday evening at 7 p.m. in the Morton Theatre is a roundtable discussion on “Queer Labor in the South” that is also free and open to the public.