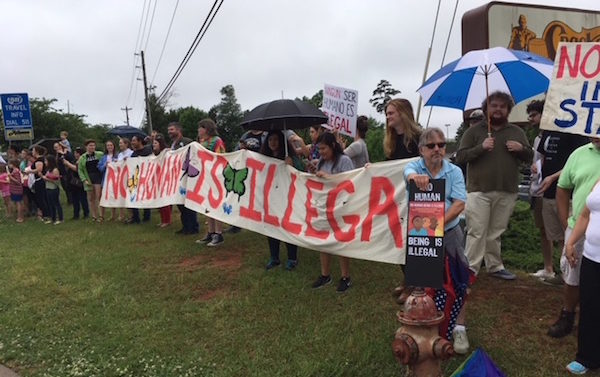 Word spread quickly when Michael Williams, a Republican candidate for governor, announced Tuesday that his “deportation bus” would be visiting Athens on Wednesday afternoon.

The old school bus—which warned that “murderers, rapists, kidnappers, child molestors [sic] and other criminals” were on board and urged people to “follow me to Mexico”—was scheduled to make stops in Gainesville, Clarkston, Decatur and Athens.

Except it wasn’t really stopping in Athens. The scheduled stop was at a Cracker Barrel in Oconee County—and Williams didn’t give the restaurant chain a heads-up. Cracker Barrel issued the following statement after numerous locals contacted them:

At Cracker Barrel, we work hard to foster a culture that is welcoming and inclusive for our guests and employees, founded in mutual respect and equal treatment of all people. Cracker Barrel is not a political organization and has no party or political affiliation. Our focus is on delivering our mission of Pleasing People and serving everyone who walks through our doors with genuine hospitality, not politics.

We are not sponsoring this event or supporting Mr. Williams’ campaign stops in any way, and per our company policy, we will not allow him – or any political candidate – to host an event on Cracker Barrel’s property. We take pride in showing our communities and our country that the hospitality we practice is indeed welcoming and inclusive to all.

Williams’ campaign denounced Gainesville, Clarkston, Decatur and Athens as “sanctuary cities.” Setting aside the issue of how much effort local governments should put into assisting federal agents on enforcing immigration law, Athens is not a sanctuary city. Sanctuary cities are banned by state law. While Athens-Clarke County officials may do the bare minimum to comply with state and federal law, and they don’t cooperate with Immigrations and Customs Enforcement if they can help it, they do meet all state and federal requirements.

During the Gainesville stop, Williams accused Lt. Gov. Casey Cagle, the frontrunner for the Republican nomination, of “turning a blind eye to criminal illegal aliens.” That did not sit well with Hall County Republicans. The chairman of the county GOP called it a “near crazy statement.”

But crazy is what Williams is after. He’s trying to one-up Cagle, who’s running a fear-mongering campaign ad about the dangers of Mexican gangs, and Secretary of State Brian Kemp, who’s promising to round up undocumented immigrants in his pickup truck.

“These guys are tripping all over themselves to see how far they can go,” said Clarke County school board member Greg Davis, who attended a counter-protest outside the Cracker Barrel.

At its peak, the protest drew about 200 people lining the sidewalk along Epps Bridge Parkway, chanting slogans like “Hey hey, ho ho, Michael Williams has got to go.”

One of them was Andrea Bobadilla, a North Oconee High School student who said her mother saw a post about Williams’ event on social media.

“It makes me feel like I should do something about it, because he’s being very ignorant,” she said.

Bobadilla, who was wearing a University of Georgia hoodie, said she’d love to attend UGA, but she can’t because the Board of Regents has banned undocumented immigrants. Instead, she said she’s going to Stetson University in Florida on a full scholarship.

The “deportation bus” was also met with massive protests in Clarkston—not surprising, considering that the metro Atlanta city may be the most diverse in the U.S.

The bus never did arrive in “Athens.” Williams blamed “antifa and radical liberals” who blocked the bus. Apparently he never left its friendly confines at either stop. So much for the man who fancies himself a #FearlessConservative on Twitter.

He wouldn’t have gotten any warmer of a reception had he continued on—even if he could have found a place to park his bus. At least a hundred yards a way from the main protest, tucked out of view, stood four people waving Williams’ signs. They left within 20 minutes after Williams was scheduled to arrive. Meanwhile, protesters stuck around for over an hour, until it became clear the candidate was, at the very least, hopelessly behind schedule.

Not that any of this matters. The latest poll shows Williams’ support at 3 percent—within the margin of error. The “deportation bus” was a desperate stunt, and the results on May 22 are likely to show that it didn’t work, except perhaps to wake up liberals to just how far to the right the GOP has shifted.

Correction: According to Sheriff Scott Berry, Oconee County applied for but was never accepted into 287(g).