Trump, The Godfather and the Mayor

Hope for the Future

So, there was a standing-room, sit-on-the-floor-up-front crowd Friday night at Ciné to hear citizen activist and former Seattle City Council member Nick Licata talk about how to get effectively involved in making our community better. The crowd was diverse: young, old, black, white, male, female and other. There were around 200 people crammed into the Ciné Lab, but that crowd did not include our mayor and commissioners, except for Melissa Link, who was on the panel that discussed local applications of Licata’s activist advice. Sure, Friday night is busy, but come on. The boycott by our local government officials looked very much like a put-down of progressive Athens.

Since great art has the power to remain relevant even as societal circumstances change, perhaps it is time yet again to see if The Godfather still makes us an offer we can’t refuse. Is Don Trump Don Corleone? Both have tight organizations based on self-interest and loyalty. Both are disdainful of public opinion and totally ruthless in getting the results they want. Both strike back hard against their enemies when challenged. Both put family and cronies in charge of their operations. Both are fabulously successful while refusing to play by the rules. 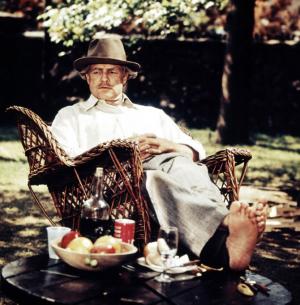 Don Trump is no Don Corleone.

Still, you can’t quite see Corleone tweeting. His rule is don’t get mad, just put the horse head in the bed.

Trump, on the other hand, blabs his anger before he tries to get even, telegraphs his moves. But until we see his tax returns, we have to assume that he has been even more successful than the Sicilian—and of course he flaunts his success much more than those low-key Italians in their compound out in Queens.

Don Trump got out of Queens, and there’s something else about him that doesn’t fit with the godfather. Corleone is cool, understated, determined, deadly. That’s not Trump. He’s more like, not Michael, but Sonny. Yes, that’s it: Sonny Corleone! Hot-headed, impulsive, ready to strike back when provoked, quick to jump in the car and go beat the hell out of somebody, heedless of the toll he may have to pay—that we all may have to pay—when the machine guns start blasting.

So, yes, it’s time to watch The Godfather again, and thanks to Beechwood Dine-In Cinema’s Flashback Cinema Academy Award Classics, you can watch it on the big screen, where it was meant to be seen. Beechwood has lined up some of the best classics ever filmed, and they’re showing Wednesdays and Sundays at 2 p.m. and 7 p.m. both days.

You’ve already missed Breakfast at Tiffany’s (1961) and the final showing of Aliens (1986) is Wednesday, Jan. 18. Next, on Jan. 22 and 25, they’ve got the incomparable Citizen Kane (1941) named by the American Film Institute as the greatest film ever. That’s because it’s about “a larger than life newspaper publisher who is both loved and hated, and never less than fascinating.” No, it was not filmed here in Athens.

Gone With the Wind (1939) plays Jan. 29 and Feb. 1, The King and I (1956) Feb. 5 and 8 and It Happened One Night (1934) on Feb. 12 and 15. “Frank Capra directed this quintessential romantic comedy about a wealthy socialite (Claudette Colbert) and a wisecracking newspaperman (Clarke Gable)…” Think Blake Aued in a mustache and wifebeater.

The series ends with multiple bangs as The Godfather (1972) takes the screen on Feb. 19 and 22. If by any chance you’ve never seen it, for God(father)’s sake go see this groundbreaking movie. If you have already seen The Godfather, you know what an opportunity this is to re-enter that world of greed, vioence and family values.

While we’re praising Beechwood Dine-In for straying off the usual multiplex game plan, it is necessary to mention the best-kept cinema secret in town. You probably don’t know that hundreds of your fellow citizens fill Beechwood Dine-In for the Metropolitan Opera Live in HD every other week. If you search the Beechwood Dine-In Cinema website diligently, you can find the schedule of upcoming operas, live on Saturdays and encore performances on Wednesdays.