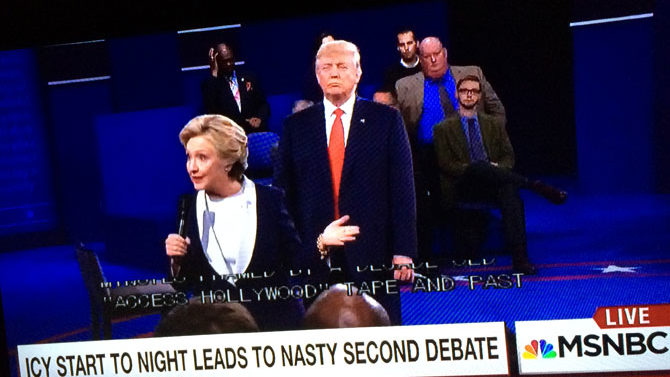 You can call Sunday night’s debate a draw, but it was more like the fourth quarter in the Georgia-South Carolina game, when the Dawgs were ahead of the Cocks by two touchdowns and playing the defense that gives up short yardage but prevents the bomb. Trump connected with a lot of throws, but Clinton was still ahead at the end of the game.

Hillary Clinton embodies the government of business-as-usual. She is far too close to the middle for that giant segment of her party that supported Bernie Sanders. Unlike Trump, though, Clinton knows how government works, both here and abroad. To those of us who support Clinton, it is inconceivable that a man like Trump could be elected to lead our country, but we’ve been there before. George W. Bush was little better prepared to be president, and our nation suffered grievously from his inexperience and his takeover by right wing extremists. Those same extremists are ready to step in and help Trump govern, should the unthinkable happen.

The Tea Party Republicans vowed to disrupt the Obama presidency, and they have done so for almost eight years. They have stymied every effort to deal with the problems they now decry as evidence that our country is on the wrong track. They excoriate “Obamacare” for all its weaknesses that they tacked onto it before it narrowly passed in spite of them. They bemoan the state of the economy that their policies brought to its knees through foolish, ruinous wars financed by credit card. They want to make America great again after they have blocked all efforts to sustain our country’s crumbling infrastructure. They want to bring jobs back to America after they have looked the other way while American corporations have moved their jobs and their tax base out of the country. They want to tax the poor and give the rich a free ride with the excuse that this will create the jobs such policies have failed to create ever since the Bush tax cuts. They deny global warming because those who support them financially are invested in environmental destruction. They oppose and belittle government regulation because governmental regulations protect water and air quality, product safety, equal rights, the environment and the earth—all of which they pollute for their profit.

Like Barack Obama, Hillary Clinton is anathema to those who despoil our resources and our people. It is irrelevant to their leaders that Obama is black and Clinton is a woman, but they know full well how to incite the masses with their racist, sexist messages.

Donald Trump is the culmination of all these decades of anti-government campaigns. He represents the purest essence of the Republican Party, stripped of all its historical aspects as a coequal political party with a noble tradition of politics and governance, with its heart now eaten out by greed that hides within the worst aspects that can be called forth from our citizenry when they are under the extreme economic pressure fostered by the very people who pretend to be their saviors.

The ancient Greek Sophists knew how “to make the lesser appear the better cause.” They’re still around; they’re still at it. They have ruined far greater civilizations than ours, while promising to make them great again.