A Doggone Good Lesson in Journalism 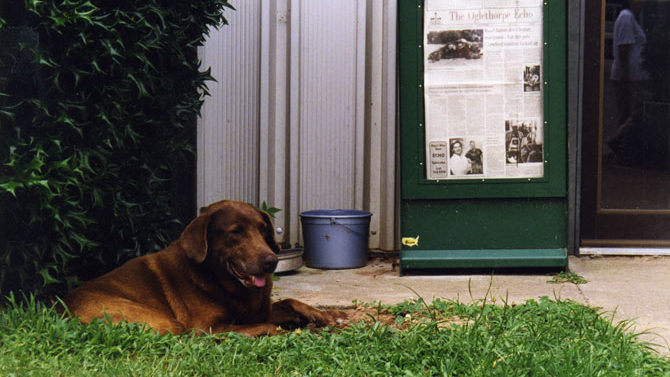 Last week, with July 4 approaching, Flagpole got a press release from an Atlanta veterinary clinic entitled, “Don’t Let the Fourth of July Be a Dangerous Day for Pets.” Among other things, it emphasized that fireworks can cause panic in animals, so, naturally, I thought of Brown Dog, especially since we parked next to where he used to live when we drove down to Lexington for our annual July 4 repast at Paul’s Bar-B-Q—“Open Saturdays and the 4th of July.” Saturday was also the Fourth of July this time, so it was a convergence not to be missed, sort of like what Venus and Jupiter were doing in the night sky.

I have written about Brown Dog several times before, but that’s no excuse not to do it again. I have written about Ralph Maxwell, too, and can never say enough about him. I guess you’d call him a vanishing breed, though his son and namesake Ralph, Jr. has done a great job of following in his footsteps.

When I started out in the newspaper business with absolutely no experience or background in journalism, Ralph Maxwell was the owner, editor and publisher of The Oglethorpe Echo and the managing partner in Greater Georgia Printers, the central printing plant established by several weekly papers in the Athens area.

Like his counterparts all over Georgia, Ralph Maxwell covered public meetings and wrote about them; he wrote editorials giving his opinion on matters of the day; he laid out the paper, sold and composed the ads, printed the paper on a flatbed press, delivered the paper and then spent the rest of the week printing leaflets and circulars and any other kind of printed matter people needed. He continued to do all that except print the paper once Greater Georgia started.

What made Ralph Maxwell so effective as a journalist was a skill they probably don’t teach in the Grady College of Journalism and Mass Communication: He was a mechanic; he knew how to fix machinery and keep it running. By the time I met him, Ralph Maxwell had already spent several decades running presses and his Linotype machine—the pre-computer, giant contraption that converted keystrokes into metal letters forged from molten lead, letters that had to be assembled into galleys that printed newspaper pages. The Linotype, like the flatbed presses, was a marvel of the mechanical age, and like anything mechanical could break down at the worst times, leaving you a journalist in name only. Mr. Maxwell had been in even tougher situations when during World War II he was an engineer on a ship steaming back and forth between America and Britain, through waters infested with German submarines. If something broke down out there, Mr. Maxwell told me, you had to fix it somehow, because you surely couldn’t send off for help or parts.

Well, Brown Dog was one in a line of Mr. Maxwell’s canine office companions, and he was a big, brown dog who made his circuit every day in downtown Lexington, checking around for girlfriends needing attention and investigating to see if any lawyers visiting the courthouse had left their lunch sandwich (again) under their car to keep it out of the heat. Brown Dog resided in the bushes in front of the Echo office, and only on the coldest nights did he sleep inside by the wood stove.

Alas! One Fourth of July, a passerby reported to Mr. Maxwell that Brown Dog had attended the fireworks show at the high school and had been so spooked by the explosions that he ran across the highway and was killed by an oncoming truck. Mr. Maxwell drove to the school and collected Brown Dog’s body. He took his friend home, and with a heavy heart buried him in the backyard.

It’s hard to see how such a pitiful story could have a happy ending, but it did, for Brown Dog. When Mr. Maxwell arrived at the Echo office the next morning, he was stunned to find Brown Dog in his usual place in front of the office, eagerly awaiting his breakfast. It quickly became clear that Mr. Maxwell had buried another dog. In spite of his sympathy for that stranger missing a pet, he had reason to celebrate that Fourth of July. I like it that this happened to Mr. Maxwell and Brown Dog at the newspaper office, because it is indeed a lesson for journalists about how appearances can be so deceiving that even an experienced observer like Ralph Maxwell can believe what he has been told, rather than what he has seen with his own eyes. You’ve got to know where the bodies are buried, but it’s just as important to know who’s who.