New Book Explains Why Georgia Is the Way it Is 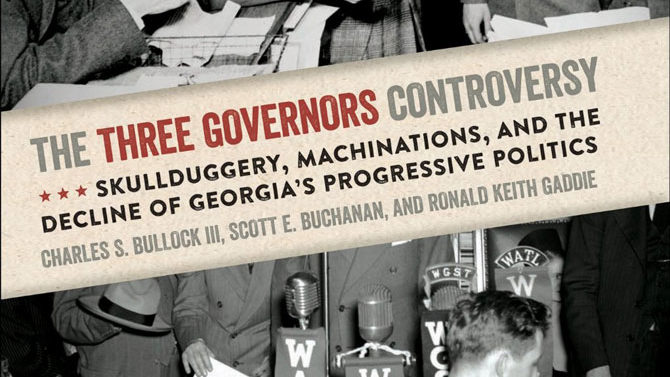 “Hummon: I got my eyes on that chair.”

Or words to that effect. Herman Talmadge was the young, newly installed Governor of Georgia. (None of us could say “Herman.”) M.E. was the newly elected lieutenant governor of Georgia, who claimed the governor’s chair because of the recent death of Herman’s father, the legendary Eugene Talmadge, who was the newly elected governor but died before he could take office. Got it so far? Well, downstairs in the Capitol rotunda was another man who also claimed to be governor of Georgia: Ellis G. Arnall, who had, up until now (1947), actually been governor.

So, count ‘em: We’ve got three different men (death having taken Ol’ Gene out of the equation) claiming at the same time to be governor of Georgia.

This is one of the more bizarre episodes in our state’s rich political history, as my journalistic colleague, Tom Crawford, so competently shows in this week’s installment of his column, Capitol Impact. The three governors controversy was lampooned all over the country and by radio comedians, the forerunners of late-night TV. Fortunately, for our edification and entertainment, the University of Georgia Press has recently published The Three Governors Controversy: Skullduggery, Machinations, and the Decline of Georgia’s Progressive Politics by Charles S. Bullock III, Scott E. Buchanan and Ronald Keith Gaddie. Bullock is, of course, the longtime and highly distinguished UGA professor of political science and go-to guy for state political analysis. This book, with its maps, tables, photographs, notes and index, is a highly readable and long-overdue account of the high-stakes game that played out after the ailing Talmadge died before taking office.

Again, I direct your attention to Capitol Impact, and certainly to the book itself. As Tom says, it is hilarious and excruciating and therefore eminently readable. The authors, having got ahold of such a juicy plot, pack in all the human interest and telling detail that such an episode deserves, bolstered by copious statistics on the economy, vote results, racial percentages, etc. If you ever find yourself wondering why Georgia is the way it is politically, this book is your GPS, to tell you not only where you are but why.

As Tom points out, the three governors fight triangulated all the past political forces with those emerging influences that were propelling Georgia forward toward modernity, or what passes for it here: the county unit system that kept the state in the iron grip of rural interests and thwarted majority rule; the agitation for voting by black Georgians and the efforts to suppress their vote; the affect of 300,000 returning veterans, white and black, many of whom had for the first time seen their state in the eyes of the world.

As the authors show, Eugene Talmadge was such a forceful presence in Georgia politics for two decades that there was room only for the Talmadge and the anti-Talmadge factions in those days before the two-party system in Georgia. Because of Talmadge’s extremism, his opponents by definition were more moderate, but they were also defined not by what they were for, but by whom they opposed. The Talmadge faction loosely corresponds to Georgia Republicans today, with the Democrats wearing the mantle of the anti-Talmadge crowd.

So, if you find yourself wondering why people so strongly support somebody like our governor, Nathan Deal, or how our state could choose David Perdue over Michelle Nunn to represent us in Washington, you can find the answers right here in this book. You can also be reminded just how difficult it was for black Georgians to gain the right to vote and why they still have to struggle to maintain that right.

We are fortunate that these three political scientists have focused their attention on this famous incident, because it has always lingered in our state’s history as a tantalizing, mythical occurrence. Subjected to scholarly examination, the three governors controversy turns out to have been even crazier in fact and more far-reaching in effect than the popular imagination has conjured.  A big part of the reason the book succeeds so well in elucidating this confrontation is its careful depiction of the historical context—who all the major players were, how they came to be assigned their parts in the drama and what lessons the audience could take away, after the curtain came down.