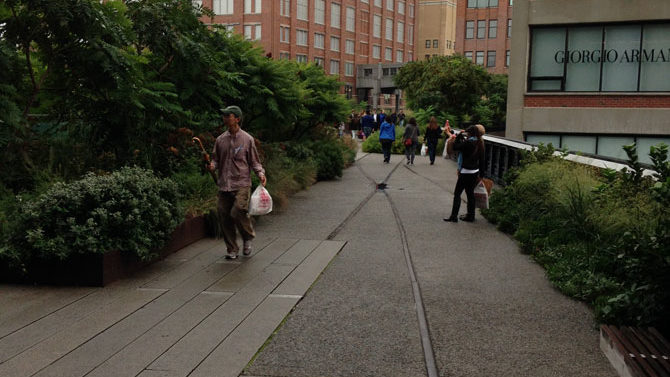 During a recent visit to New York City, I finally got the chance to walk on the High Line, having been prevented by weather and time on previous visits.

The High Line is a rather unusual rail-to-trail conversion, because it is elevated and runs among city buildings at a third-story level for 35 blocks along 10th Avenue on the west side of Manhattan. Like the BeltLine in Atlanta, it was a railroad servicing commercial and manufacturing centers when virtually all supply was by train. Originally at street grade, the line was lifted in 1930 to separate the trains from automobiles and pedestrians, and by the ‘80s trucks had made it obsolete. Part of it was torn down, but this much was saved long enough for the city to take it over and convert it, with a lot of help from private efforts.

Now, it is a stunning ramble with copious plantings of flowers, shrubs, grasses and trees, with the city on one side and the Hudson River off in the distance on the other. The buildings along 10th Avenue are relatively low-rise, and you get an excellent view of them as you walk along, with the skyscrapers lurking beyond.

The main complaint about the High Line is that it always so crowded. We were lucky in that the day was drizzly, cutting down on the crowds and the heat and lending a feel of mystery. Meandering along, we started in daylight and finished after dark, getting to see the city in its varying shades of light.

The most striking aspect of the High Line, though, is the amount of new construction going on along it. Restaurants and bars have sprung up because of the steady stream of visitors, but much more impressive is the flurry of construction—apartments and office buildings—going up along the High Line. The skywalk is an obvious magnet, an amenity that increases the value of living and working near it.

Trails developed from rails are proving to be economic boons all over the country, most especially in cities. That’s why we’re so lucky here in Athens to have our nascent network comprised of the greenway and all its possible connectivity, carrying people not just along the river but into downtown. That’s why the Firefly Trail, the bed of the old Georgia Railroad out to Winterville and beyond is so rife with potential. A level path from there into downtown Athens will revolutionize Winterville and make it an even more popular area for living. Walkers and bikers coming from the Eastside will link up with it, too, enhancing the livebility of those suburbs. In the same way, as Jack Crowley has pointed out in his Downtown Master Plan, the rail line running through campus and on out past the State Botanical Garden is an amenity just waiting to be discovered, if the University and the city will wake up and start actively trying to negotiate its purchase.

While it can be inspiring to go elsewhere and see how successful these walking and biking paths can be (no bikes on the High Line, however—dogs, either), it can be frustrating, too, to see how long it takes our own city government and our university (and some of our citizens) to appreciate what other places now take for granted and thrive on. Walking and biking along a level path as a healthful, enjoyable way to get around is a proven benefit to every town and city and rural area with the foresight to use what they have. It’s high time for us to connect the lines. We will be amazed at the payoff.