Film, Stage, Fiction and the Guide

The Devil in Mr. Johnson

Following Grady Thrasher’s and Kathy Prescott’s fun sponsorship of Young Frankenstein and James Ponsoldt’s exciting “premiere” of his new film, The Spectacular Now (see our Q & A with Mr. Ponsoldt), the next fundraiser at Ciné for its Kickstarter campaign for vital new digital projection equipment is a showing of winners from the recent Atlanta 48-Hour Film Project, including the big winner from Athens, Last Fair Deal Gone Down. This is a short film dramatizing the legend of blues master guitarist Robert Johnson bargaining his soul to the Devil at a Mississippi crossroad in return for his talent. This is a flawless gem of a short film, and you’ll see why it won best film and several other honors, and why Myron Dietrich Tucker won best actor. Local musician Wilma produced, and local actor/director Allen Rowell assembled the all-star cast, many of whom you’ll recognize. A Q&A follows the film, and if the other winners are in the same league with Last Fair Deal Gone Down, this should be a good night of film creativity. Ciné’s Kickstarter deadline is Aug. 18, so there’s not much time left. Get down to Ciné on Tuesday evening Aug. 13 at 6:45 p.m. to make a contribution and find out just how good a film can be made in 48 hours.

The Athens of Georgia

Don’t miss the beginning episode of our new serialized novel, The Athens of Georgia, by local writer C.J. Bartunek, (in the paper this week, online beginning Aug. 14). This is the familiar tale of boy follows girl to Athens. Girl gets involved with somebody else. Boy gets involved in the music scene. Lots of people get involved with each other in lots of familiar places around town, and we believe you’ll get involved with The Athens of Georgia in Flagpole each week. We hope you find it to be fun. 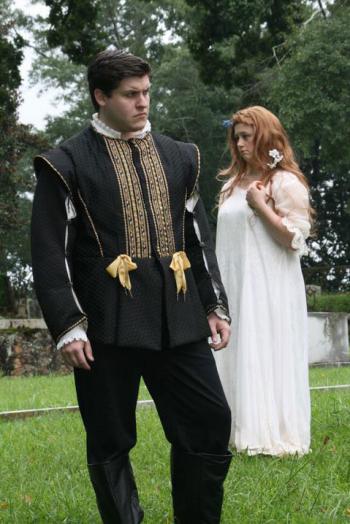 Patrick Najjar is Hamlet, and Jayne Lockhart is Ophelia.

Okay, get ready. Mike Smith, one of the Town & Gown stalwarts, is directing Hamlet with a great cast, including Patrick Najjar as the prince, Jayne Lockhart as Ophelia, Derek Adams as Claudius (and the ghost), Beth Kozinsky as Gertrude, Tim Dowse as Horatio, Adam Shirley as Laertes (and Gildenstern), Briton Dean as Rosencrantz (et. al.), Skip Hulett as Barnado (etc.) and John Olive as Polonius (“Neither a borrower nor a lender be… “ and so forth.) and more. A great play, a great cast, a great director, a great night at the theater: romance, madness, murder, incest, swordplay, poison, humor, blood—with the absorbing unpredictability of live performance. Coming Aug. 16-18 and 22-25. Get details at www.townandgownplayers.org.

The Little Mermaid in Oconee

In more theater news, the talented troupe out at Oconee Youth Playhouse is putting on Disney’s The Little Mermaid, Jr., running this week Aug. 9-11 and next week Aug. 16-18 in the nice facility at the Oconee County Civic Center. You can always count on Oconee Youth Playhouse for highly entertaining, family-friendly entertainment with great music, sets and costumes. More info at  www.oypoysp.com/playhouse.

The Flagpole Guide to Athens

The 2013-14 Flagpole Guide to Athens has been distributed all over Athens, the campus and Watkinsville, and as usual it is chock full of helpful, interesting and entertaining information to help you find what you want and need in the Athens area. The Guide is designed to be kept around all year for consultation as needed. And, believe me, it will be needed. It’s a good idea to keep one around the house and in the car and in the backpack. It’s also available online, of course, and on your phone, iPad, etc. This is the only comprehensive guide to everything Athens, and it will be available all year at over 300 locations.