Locally Owned Businesses Like Avid and Daily Groceries Are Struggling 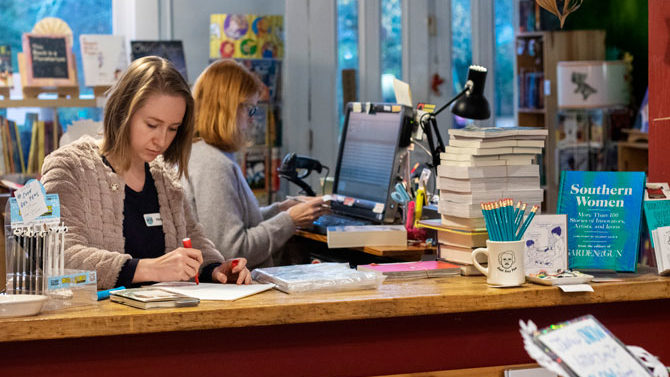 Avid Bookshop owner Janet Geddis reached out last week to her store’s thousands of customers and social media followers with a 3,000-word message announcing the upcoming closure of the store’s Prince Avenue location, adding that it will retain its larger Lumpkin Street site in Five Points.

In the wake of Ike & Jane’s sudden closure last month as a result of a big rent increase, the news stunned Normaltown, which has boomed in recent years with the establishment of home-grown restaurants, bars, juice shops and cafés. Geddis’ decision was partially based on challenges negotiating a long-term lease for the Cobbham space. Just down the street, Flagpole’s new landlord recently raised the rent by $1,600 a month, prompting the locally owned newspaper to sublease space and ask readers for donations.

“Avid Bookshop is safe, but I need to tell you something,” Geddis wrote. “Effective December 31, 2019, we will be closing Avid Bookshop on Prince Avenue, shifting to a one-store model once again.” She then added, “Did you gasp? I’ve known this news for a bit and still find that the preceding sentence leaves me feeling a little short of breath.”

The memo continued with a lengthy FAQ section that portrays the painful decision-making process behind the store closing and the beloved shop’s road forward.

Geddis opened Avid’s Prince location in the fall of 2011 after investing four years and $60,000 developing the store. Opening well after Amazon had already devoured a huge share of the bookselling market, the store’s early success was marked by strong sales, well-stocked shelves emphasizing quality literary works and frequent author readings. Many were surprised and delighted that Athens could support an independent, upmarket bookstore.

Almost simultaneously with Geddis’ email, the Daily Groceries Co-op, which sits almost next door to Avid’s Prince Avenue location, posted a similarly anguished note on Facebook that alerted its followers that “this year has been especially rough for us,” asking for customers to “help us keep writing this narrative” and “come shop!” The two stores almost feel like siblings, nestled together and sharing customers on a corner of quirky, early 20th Century brick buildings along a busy stretch of Prince Avenue just west of the Bottleworks.

Both Geddis and Daily Co-op manager Kara Brown say that sales at their stores are down in 2019. Geddis added that Avid’s Five Points location also posted lower sales this year. Despite the downturn, or perhaps prompted by it, Avid is continuing to increase sales with savvy, aggressive marketing campaigns that build on its ability to attract customers and develop lasting relationships.

These retail hubs now serve far more important roles in their neighborhoods than simply providing reading materials and food to local customers, Geddis said. In the age of online shopping, the stores also serve as vital activity nodes that spur social interactions and help banish isolation, known to be particularly dangerous for seniors. Geddis cites the widely known research that “social isolation can be as risky as smoking,” adding that even deeply introverted customers eventually warm to Avid booksellers and begin to talk and share their interests. The bookshop’s agile employees have developed ways to spur book sales by maintaining regular contact with customers and creating custom messages that cater to the specific interests of their book buyers. They also host author readings and regularly appear at events such as the recent David Sedaris appearance at the Classic Center, where the shop set up a table to sell the writer’s books.

In an interview, Geddis said she was surprised at the response to her email, and that nearly 60 local business owners and employees representing 30 Athens companies wrote and echoed the concerns she described. They also shared the anxieties of owning struggling small businesses in a retail world increasingly dominated by large, publicly traded retailers that compete aggressively with low-price strategies.

Bain Mattox, a local musician and owner of Normal Bar, Automatic Pizza and Buvez, is a loyal customer and friend of both Avid and Daily. He understands the struggle of operating small businesses. “Sometimes we feel like we are under attack more than supported” by the city, he said, citing as particular sources of anxiety blue laws and occupational taxes that increase as owners hire new employees.

Sanni Baumgaertner of Community, a downtown specialty shop featuring local and Georgia-made fashions and gifts, also echoed the concerns shared by Geddis. “When you are a struggling small business, there’s not a lot of security to fall back on,” she said.

Daniel Cullen, senior strategy officer for the American Booksellers Association, praised Avid’s success: “People can go to Avid to connect with authors [giving readings] but also with their own community. That’s what makes the store a special place.”