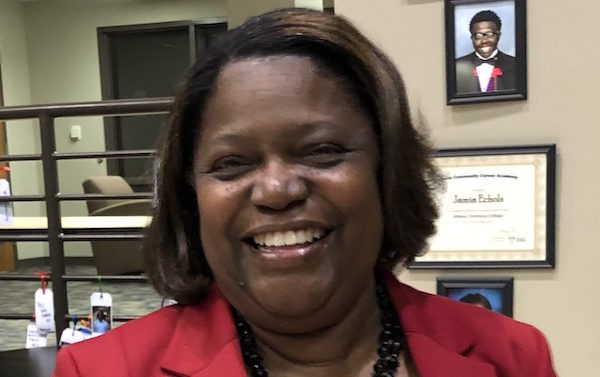 The Clarke County Board of Education voted unanimously Tuesday to name Xernona Thomas as interim superintendent.

Thomas had served as former superintendent Demond Means’ chief of staff until last week, when the board placed Means on administrative leave, ending his controversial two-and-a-half year tenure.

Thomas is a Clarke Central High School and University of Georgia graduate who holds a bachelor’s degree in journalism, a master’s in social work and a doctorate in education, and has 27 years of experience as a social worker and school administrator in Clarke and Oconee counties.

Thomas said she will approach her new role “slowly” and “thoughtfully” and does not anticipate making major changes. The entire administrative team remains devoted to continuing Means’ focus on racial equity and making sure every child receives a rigorous education, she said.

“We’ve had a lot of people and a lot of situations that have been a distraction, but the work is not going to change,” she told Flagpole.

Thomas said she will not be a candidate to hold the position permanently. There is no timetable for naming a permanent superintendent, according to board president LaKeisha Gantt. Nor is there a timetable to conclude negotiations with Means on his severance package, Gantt said.

“Dr. Thomas has the board’s full support to lead the district through this transition,” Gantt said in a news release.

About a dozen protesters from the local NAACP held signs in support of Means as the board met behind closed doors for an hour and a half.

Chapter president Alvin Sheats said he is pleased with Thomas’ appointment. “I think Dr. Thomas will be a fine superintendent,” Sheats told Flagpole. “I have the utmost confidence in her.” But, he added, he is still disappointed that Means was dismissed.

The board also voted 7-1 to hire the Atlanta law firm McFadden Davis to handle negotiations with Means, as well as with Cognia, the accreditation firm Means asked earlier this year to investigate allegations of micromanagement by board members.