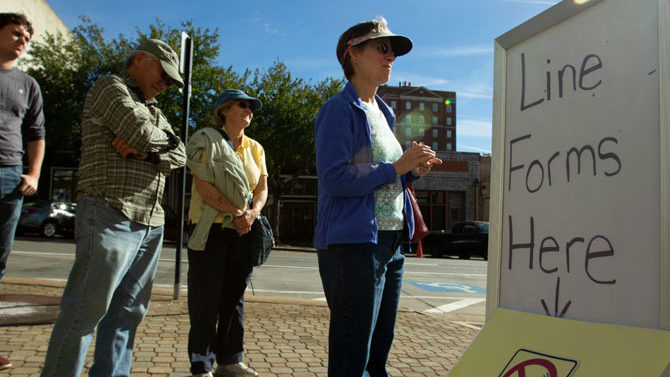 Athens-Clarke County offered fewer opportunities to vote early and fewer Election Day polling places last fall than in 2016, despite an uptick in registered voters and turnout that wound up nearly matching the last presidential election, and the local election supervisor argued against a request to open another early voting location, according to documents Flagpole obtained through an open records request.

A numerical dissection of the 2018 election in Athens-Clarke County—which featured unusually long lines and problems counting absentee ballots—reveals a handful of telling observations:

• Of the 3,609 absentee ballots requested, 3,047 were returned and counted. It should be noted that 290 ballots initially mailed contained an error, listing a candidate in the state Senate District 47 race as a third-party candidate, when he was actually a certified write-in candidate and should not have been on the ballot.

• Four precincts were combined with other precincts’ polling places, one of which had nearly 74 percent of its registered voters cast a ballot. The largest non-combined precinct, 2B in East Athens, had the lowest turnout with 47.5 percent of its 4,788 voters, while the two smallest precincts—6D on the Westside (1,586 registered voters) and 5C in Normaltown (1,963)—recorded turnouts of 72 percent and 75.2 percent, respectively.

What does this all add up to? It was the first big election in Athens for Director of Elections and Voter Registration Charlotte Sosebee, who came to work here from Hall County after the November 2016 election. While Hall County does have 45,000 more voters, the two counties’ demographics are much different, with more black voters in Clarke and more Hispanic and white voters in Hall. Sosebee admitted she’s still getting a read on ACC’s electoral tendencies.

“I’m learning my new area, and there are some things that we need to work on,” she said during an interview last month. “My goal is to have us ready for 2019 so that 2020 will be smooth. That’s my plan.”

But there were some moves made—and not made—that might have smoothed certain bumps along the 2018 road.

The numbers show that more early voting opportunities could have made a difference. Plans for advance voting at Cedar Shoals High School were painted as a last-minute idea by both Sosebee and some members of the ACC Board of Elections, but recently obtained documents tell a different story.

The same day—Aug. 21—that BOE member Jesse Evans called Sosebee to inquire about early voting at CSHS, Sosebee sent an email to BOE Chairman Charles Knapper giving him a heads-up that Evans would contact him and detailing all the reasons early voting at CSHS shouldn’t happen. While she did note that delaying the hours there would give commuters a chance to vote that they didn’t normally have, she cited staff shortages, lack of laptops, IT issues and a short time frame as reasons not to move forward. “Really and truly, with consideration of the things I mentioned, we are too far into the preplanning of the process to make any changes,” she wrote in the email to Knapper.

Sosebee continued that “it should also meet the approval of the board for us to include an additional site and your next meeting is 9/4, which would be too late to even consider the possibilities.”

Meanwhile, Evans, unaware of those machinations, received approval from Cedar Shoals principal Derrick Maxwell to host early voting there, and prepared a schedule to account for time to get the machines in and set up the IT for one day of voting. Sosebee told Evans the BOE had to decide if CSHS was a go at its Sept. 4 meeting, but in the email added that “it may be too late in the game to make additions; plans for other sites are already in motion and information updated already with our ballot builder.”

Evans called the Georgia Secretary of State’s office to determine if there was enough time to get advance voting in place if OK’d at the meeting, and was told “that as long as we enter the location into [the computer system] by the first day of early voting (10/15/18) then we will have met the only relevant deadline.” Sosebee said that was indeed true, but reiterated, “I am not sure how effective we will be with our scheduling as far as staffing the locations and the delivery team’s schedule.”

“I want to make sure I understand your most recent message,” Evans wrote back. “Are you saying that 37 business days/51 calendar days wouldn’t provide enough time to plan & coordinate staffing & logistics for 1 day of early voting at CSHS?”

Her response in a follow-up email: “I just do not see it.”

“When Jesse first called me about us going to Cedar, I said, ‘Oh, that’s such a great idea, you could even push it to the point where you could have later hours—it’s going to be different than all the other polling locations,’” Sosebee said in a phone interview. “After I got off the phone with Jesse, I got excited, and I’m telling the staff and everything, and [Elections Assistant Cora Wright] said, ‘Wait a minute, I don’t think we’re going to have enough equipment. I don’t think we’re going to have enough laptops, because we have to use laptops when we’re going to early voting.’ And then I called Wanda [Raley]—she handles our poll workers—and she said, ‘Charlotte, we don’t even have enough poll workers lined up for the other places that we have already consented to.’ I told Jesse that sounds like a good idea—and it was a good idea—but I told him the board has to make that decision.”

During an executive session at the Sept. 4 meeting—which the ACC attorney’s office would later say was in violation of the Georgia Open Meetings act—the board discussed matters involving early voting at Cedar Shoals. In deciding against the early voting site, Knapper said the location was brought up at the “last minute,” a sentiment echoed by fellow board member Alison McCullick.

There is no set time period before an election to declare advance voting sites. State law says counties “shall provide reasonable notice to the electors of their jurisdiction of the availability of advance voting as well as the times, dates, and locations at which advance voting will be conducted.” And while attempting to set up an advance voting site in two months might prove a difficult task, it’s been done before in Athens. During the 2016 election, the decision to make UGA’s Tate Student Center an early voting site was approved by the BOE on Sept. 7, less than two months before the general election. Both Knapper and McCullick were on the board at the time.

Even if Cedar Shoals had been approved for one day of voting, the opportunity to vote at City Hall was dramatically reduced in 2018 from 2016—a total of 97 hours in 2016 versus 18 in 2018. In response to the heavy turnout on Election Day, Sosebee told Flagpole, “I think people could have voted earlier.”

In 2016, there were more opportunities to do so.

As for Election Day, Sosebee was caught by surprise—and she said many of her counterparts across the state were, as well—by the large turnout. During the 2014 midterms, 46 percent of 56,000 voters turned out in ACC, but even if the percentage remained the same in 2018, there still would have been thousands more voters at the polls, because an additional 14,000 people had registered.

Sosebee acknowledged that she underestimated the turnout, but said she based her planning on past history and phone calls requesting paper ballots.

“If we go back in history, the turnouts for midterm elections are not normally that high,” she said. “We were also getting so many phone calls and so many complaints. People were watching what was going on, and they were not for the touch-screen unit. I told poll workers in our training classes, because of the number of paper ballots requests that we were getting, No. 1, and No. 2, the people being so expressive about the use of the touch screens, I just don’t feel like we’re going to have a lot of people voting in person.”

But there were, and despite the issues on Election Day, Sosebee said, it’s a good problem to have. “People are voting,” Sosebee said, “and that’s a great thing.”