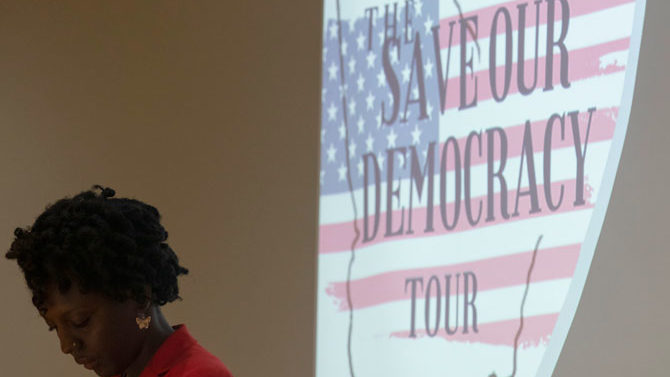 A federal judge last week allowed this November’s election to be conducted using Georgia’s creaky and much-maligned electronic voting system, despite years of widespread criticism from voting-rights and cybersecurity experts, a congressional task force, the Department of Homeland Security and many others.

U.S. District Court Judge Amy Totenberg made the decision in response to a lawsuit brought this summer by the Coalition for Good Governance, a voting-rights advocacy group, to replace the flawed and vulnerable system with paper ballots. The state’s argument was simply that it’s too late to change the voting mechanism before the November election.

Totenberg agreed with the plaintiffs’ assertions of the system’s flaws, and wrote in her 46-page decision that the use of digital recording electronic (DRE) machines was a “threat of real harm to Georgia voters’ constitutional interests,” but she sided with the secretary of state’s warnings that adopting paper ballots this close to the election would result in “chaos.”

“Secretary of State [Brian] Kemp, the State Election Board and the bipartisan Fulton County Election Board refused to act in response to serious and repeated warnings from Congress, federal agencies, National Academy of Science and scores of expert voting-system computer scientists that the paperless system is unfit for conducting public elections,” said Marilyn Marks, executive director of the coalition that brought the suit.  “Although the concerns of a transition to paper ballots are exaggerated, the defendants can create a self-fulfilling prophecy of Election Day chaos and voter disenfranchisement.”

At hearings in Atlanta, University of Michigan cybersecurity expert Alex Halderman demonstrated how to introduce malware into a single, poorly secured voting machine that would ultimately infect the entire election system and determine the outcome of the election. Halderman added that the malware could be programmed to delete all evidence of its existence after it completed its mischief.

The state’s use of DRE machines has been the subject of criticism for many years. Most states that adopted them in the early 2000s have since abandoned them, and Georgia has been obtaining spare parts for the machines from those states, because suppliers no longer support them. Cybersecurity experts like Halderman say that the machines’ use of memory cards leaves them vulnerable to hacking by bad actors who might surreptitiously slip in spurious cards programmed to alter election results.

The machines are not only vulnerable to hacking, but also provide no opportunity to conduct recounts or audits of the vote’s accuracy. With paper ballots, voters mark their selections on printed ballots and place them in a ballot box. At the close of Election Day, the ballots would be fed quickly into a special scanner that reads and tallies the votes. The paper ballots are then retained, allowing for a recount if necessary, which is impossible with the DREs. Georgia counties already use these scanners to record and count absentee ballots, and Marks estimated that Georgia owns plenty of scanners to handle the vote count.

Georgia adopted DREs in 2002 in response to the wrenching problems with the disputed 2000 presidential election, when widespread confusion over paper ballots in the extraordinarily close Florida race led to a Supreme Court ruling installing George W. Bush as president. Georgia is now one of only five states to use the machines.

Despite Kemp’s insistence upon using the DREs for this year’s election, the secretary of state’s office has apparently gotten the memo that they will have to be scrapped at some point and replaced with a new, more secure and verifiable technology. The state put together the Secure, Accessible and Fair Elections (SAFE) Commission, whose mission is to “conduct thorough discussions on all options—including the feasibility of using all hand-marked ballots to all electronic machines with a voter-verified paper trail,” with a goal of having recommendations for the next session of the General Assembly.

The DRE machines are not the only problem with the tools the state uses to allow its citizens to vote. Georgia’s entire online election system was wide open to intrusion at the time Russia was accused of hacking into other states’ systems, and remained unprotected even after Kemp had been alerted to the problem.

Kemp, also a candidate for governor in this year’s election, has been presented on numerous occasions over the past two years with evidence of cracks throughout the system, yet he has continued to maintain that Georgia’s election system is secure. Other published criticisms of the system go back more than 10 years, to the tenures of Cathy Cox and Karen Handel.

Prior to the 2016 election, Kemp pushed back when Homeland Security chief Jeh Johnson designated the nation’s voting system in 2016 to be “critical infrastructure,” similar to the financial system. Kemp called the move “blatant overreach” of federal authority.

Kemp continued to push back even when presented with evidence from Logan Lamb, a cybersecurity expert who discovered that Georgia’s voting database, then housed at Kennesaw State University, was completely unprotected by even rudimentary security measures. Prompted by special counsel Robert Mueller’s indictments of 12 Russian spies for hacking into many states’ election systems, Lamb decided to investigate the level of online security protecting Georgia’s system. He was astonished that he was easily able, without technically hacking the site, to pull more than 15 gigabytes of data from the website, including voter registration information, and instructions and passwords for county election officials.

Even when presented with evidence of these security failures, Kemp’s office refused to conduct a study of the database to look for signs of intrusion. Months after his initial discovery and report to the Secretary of State’s office, Lamb was stunned and angered when he discovered that the system remained utterly unprotected.

“Brian Kemp’s lack of action is egregious, and now a federal judge concurs with this opinion that we have missed opportunity after opportunity to rectify serious concerns with our electoral process,” said state Rep. Jonathan Wallace (D-Watkinsville), a software developer who’s taken an interest in election security issues. “Now, after years of mounting criticism, these problems are going to be present in yet another election. It’s the responsibility of the secretary of state and his staff to rectify these problems and work with our county election boards to provide 100 percent confidence that our vote is counted the way it is cast.”

For that reason, Wallace has endorsed fellow Democrat John Barrow, a former congressman from Athens, for secretary of state, but Republican nominee Brad Raffensperger also favors switching to paper ballots.

Kemp’s office has also been criticized for its adoption of “Exact Match” voting analysis.  In the past, this practice has rejected voter registration forms from individuals whose information does not precisely match their driver’s license or Social Security information, disproportionately affecting women and minorities. He has also purged hundreds of thousands of “inactive” voters from the rolls—a normal practice to clear out people who may have died or moved away, but one that has gotten more attention than usual this year.

Media coverage of Georgia’s election woes has appeared in out-of-state newspapers and magazines, including The New York Times, The Washington Post, The New Yorker, The Atlantic and Politico. “Democracy at Risk” was the title of Paul Krugman’s essay on the machines for the Times way back in 2004. Marks, of the Coalition for Good Governance, the group that sued the state, was critical of the reporting in Georgia. “The Atlanta Journal-Constitution has been telling the people of Georgia for the past 15 years that the system is safe, lulling [them] into a false sense of security,” she said, although that was before the AJC published an in-depth article on the issue Sept. 21.

Even the National Academies of Sciences weighed in on the topic, issuing a 180-page report that maintains that the state should make every effort to change the voting system to paper ballots.

One scrappy band of voting-rights activists in Morgan County, due south of Athens, formally protested the use of DREs to their county’s board of elections, prompting the board to vote on the possibility of adopting paper ballots for the November election. While that group voted no, activists say they will go next to the county commission and urge it to adopt paper ballots for the upcoming race. When the Secretary of State’s office heard about the effort, it said that the county would be punished if it adopted paper ballots, according to the activists.

In Athens, Director of Elections Charlotte Sosebee told Flagpole that she has received only one inquiry about switching to paper ballots. However, any voter who is worried about the security of DREs can request a mail-in absentee ballot by filling out a form at sos.ga.gov or picking one up at the Athens-Clarke County Board of Elections office.