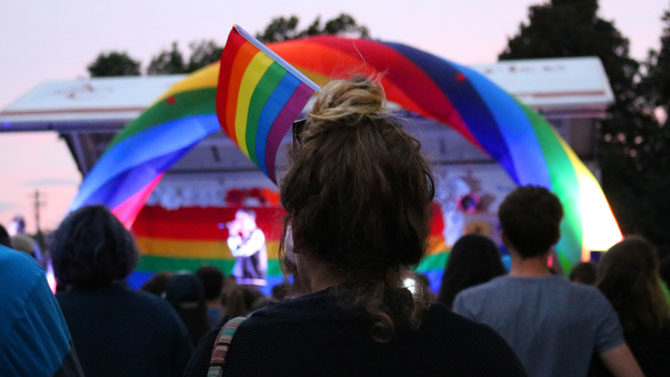 Against a political backdrop that favors those who still view the LGBTQ community with open contempt, Athens celebrates all things queer with the weeklong festival called Athens Pride, running through Sept. 9. The festivities include an evening of drag comedy, a trivia competition, cocktail parties and even a yoga class, culminating in a Sunday street party with music, performances and general fabulousness.

Divas Under the Lights, the glittering Sunday street event on Washington Street at Pulaski Street, starts at 7 p.m. and will feature performances by “RuPaul’s Drag Race” star Latrice Royale and Atlanta celebs J. Tyler and Alissah Brooks. Earlier in the day, starting at 2 p.m., food vendors, arts groups and a traveling gay paraphernalia provider called Stewie’s Got Pride will be selling their wares from nearly 50 booths, a big increase from 2017.

A large number of support organizations, such as Athens Queer Collective, Georgia LGBT Resource Center and Georgia Equality, will also be on hand to offer information about programs for the LGBTQ community. Pride board member Jacqueline Adams will display video histories of local LGBTQ individuals, which she was prompted to create when she couldn’t locate any historical references to the Athens LGBTQ community. The histories then will be compiled and kept in the UGA archives.

Celebrants can limber up for Little Kings’ dance party at 9 p.m. Saturday, Sept. 8 at a Rainbow Flow fundraiser yoga class at M3 Yoga earlier that day, at 3 p.m. Throughout the week, select restaurants and bars will compete with their own interpretations of the “Rainbow Ruckus” cocktail, and drinkers will vote for their favorites on the Athens Pride website. Details of the festival’s events can be found in The Calendar or at athenspride.org.

“Athens Pride is a time for us all to get together and celebrate who we are,” said Athens Pride Vice President Amber Strachan. “[Pride also] exists as a place for people who might not have the privilege of living in a gay-friendly environment,” such as the more conservative counties surrounding Athens, she said. For those who may have been shunned or rejected by their families, a booth will offer “Mom hugs.”

Another organizer, Jarrett Martin, said the organization is striving to make Pride Week more inclusive. “A lot of events are kind of whitewashed, but [we welcome] the new, inclusive rainbow flag with brown and black stripes,” he said.

The festival is the 20th annual gathering of the Athens queer community to observe the 1969 Stonewall riots following a police raid on a gay bar in New York City—a flashpoint in the history of gay rights. Prior to Stonewall, most gays were denied basic human rights and lived in the shadows, concealing their sexuality to parents, bosses, landlords and even friends because they feared losing their jobs, apartments or family.

The current Pride Week comes at a time when LGBTQ rights are in danger of being rolled back. Evangelical Christians hailed the July Supreme Court decision in favor of a Colorado baker who refused to bake a wedding cake for two men. In the spirit of the decision, U.S. Rep. Dana Rohrabacher (R-CA) said homeowners could decide not to sell their homes to LGBTQ buyers.

Attorney General Jeff Sessions recently announced the formation of the Religious Liberty Task Force with a warning of the dangers of secularism, darkly suggesting that “a dangerous movement, undetected by many, is now challenging and eroding our great tradition of religious freedom.” Critics called the move a “declaration of a holy war on the LGBTQ community.”

Mary Walsh and Beverly Nance, a St. Louis married couple, are suing a Missouri retirement community after it accepted their $2,000 deposit, then turned them away because of a policy that limits selling units to spouses and family and stipulates that the term “marriage” means the union of one man and one woman.

Locally, prominent Athens Republican Joan Gilbert Rhoden went on a Facebook rant against gays on the second anniversary of the Pulse nightclub shooting in Orlando. Rhoden later stepped down from Houston Gaines’ campaign for state representative.

There have been some positive developments. The Wedding Report, a Tucson, AZ-based research group, announced that nearly 3 percent of U.S. weddings are for same-sex couples. And Christine Hallquist won the Democratic primary in the Vermont governor’s race, marking the first time an openly transgender candidate has won a major party nomination for such a high office.

Meanwhile, for a few days in early September, members of the local LGBTQ community will set aside their cares, put on their best glitter and party like it’s 2015, the year the Obamas washed rainbow colored lights over the White House in observance of the Supreme Court decision to allow same-sex marriage.