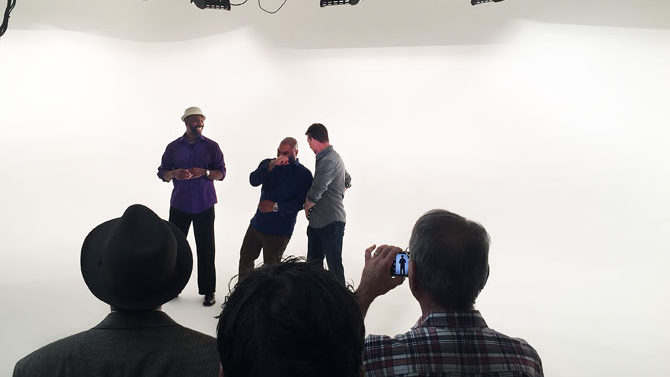 It’s not too difficult to make your own green screen—just head to your local paint store and ask for a gallon of the correct shade. But to truly get it right, you’ll also need lights, a nice camera, maybe even some good recording equipment. In other words, setting up a professional-quality studio is no small feat.

With this new addition to the Athens production landscape, Plummer hopes to snag the attention of more film and TV work, enticing crews out of Atlanta. “From script to screen to color correction, we have a full studio,” says Plummer, a cinematographer who has won many awards for his documentaries and has also created commercials and feature films through his company, Plumgood Productions. “In Atlanta, they need to see what we have out here.”

Alex Perschka, director of the Oconee County Tourism Office and camera-ready liaison for the county, says he’s excited about the opportunities Plumgood Studios brings to the area. Even small crews and productions bring people to eat in local restaurants and sleep in local hotels, and it all adds to the exposure the area gets in the Georgia film and TV scene.

“We’ve seen that in other independent films, everything from renting tables to catering to going to antique stores to buy props—it benefits a broad number of people,” says Perschka. “They have a fantastic facility, and I think it will be a draw unto itself.”

Plumgood isn’t the first studio to plant its flag in the Classic City vicinity. On the west side of Clarke County, Starland Studios, managed by producer and location scout Del Mills, hosted projects from music videos to feature films for about five years before closing in 2017. The question now asked by industry professionals who straddle Athens and Atlanta but want to see more productions closer to home is along the lines of Field of Dreams: If we build it, will they come?

So far, says Jeff Montgomery, public information officer for Athens-Clarke County, they are—sort of. “There is a perception that we don’t have things film here. That’s not accurate, although it is largely TV-related,” Montgomery says. “We have had film productions in town for shows on Bravo, Netflix, Pandora, HGTV, Fox, NFL Films, ESPN, Food Network, Travel Channel, History Channel and others in the last two years. They are mostly under the radar while they are here, which is a good thing. But we have been scouted in the past for major productions—Hunger Games, X-Men, Fifth Wave and others—it just hasn’t worked out.”

Athens isn’t getting more productions for lack of trying. Rather, it’s that competition across the state is tough. Montgomery is Athens’ “camera-ready” liaison to the Georgia Film, Music and Digital Entertainment Office, which works to market the entire state to production companies. With its varied geography, productions are pulled out of Atlanta to all different parts of the state, so communities end up competing with others for a piece of the production pie.

Then you have communities—namely Savannah—offering up additional incentives to production companies choosing to work there. Savannah’s Entertainment Production Incentives program offers cash rebates for qualifying productions, as well as a reimbursement of up to $2,000 for relocation expenses for employees who move there. This is on top of Georgia’s tax incentives, which include a base tax credit of 20 percent and an additional 10 percent if a company uses the Georgia logo in the credits.

Plummer notes that while Atlanta has the buzz, it doesn’t have the landscape to support the varied projects that are now coming to Georgia. Studios like his offer “stuff you don’t see in Atlanta,” he says. “Everybody is going to go to Atlanta to shoot, but they need to come out here to shoot.”

While Athens, Watkinsville and other area cities and counties don’t offer specific incentives, ACC doesn’t require a permit to film in the county. Instead, Montgomery asks that producers fill out an information form so he can keep some data. Based on the responses from 2017, as many as 28 projects were shot in Athens-Clarke County that year. This includes projects of all sizes and budgets, including student projects or music videos, but it also includes productions that ended up not filming in Athens.

Extra incentives offered by Athens-Clarke County could make the location more attractive, says Andy Rusk, an Athens resident who works as a stuntman on many Atlanta-based productions. Plumgood Studios gives producers one more reason to look outside I-285. “A space like this is good. Any infrastructure is good, especially when things get busy,” Rusk says. “There was a time in Atlanta when all the available space was booked.”

There’s also a common misconception that the 50-mile “studio zone” rule set by the Screen Actors Guild keeps productions in Atlanta. But that’s not the case, says Melissa Goodman, executive director of the Atlanta-based SAG office. While the rule technically states that productions taking place more than 50 miles from the intersection of Moreland and Euclid avenues in Atlanta must pay for a hotel for on-camera crew scheduled for just one day of a shoot, she says there are waivers studios can apply for that will cut down that extra cost.

“We have a 500-mile travel waiver, where we waive payment for travel to and from the production,” Goodman says. “And most productions are getting very cheap rates in hotels, so we’re not asking a lot of them.”

Depending on the time of year, hotels might be harder to come by in Athens, though, Montgomery says. “Keep in mind that it’s hard to find hotels in Athens during the fall if you want to be here for any specific length of time, or even over graduation,” he says. “Some productions have needed upwards of 30 hotel rooms at a time.”

Perschka adds that he and Montgomery are working together to promote the area to the film and TV industry, since productions will often pull from surrounding counties while they are here. “This is the greater Athens area,” Perschka says. “To me, it’s just getting people here, getting them familiar with the community and making sure they have a good experience with the community that will bring them back over and over.”

At Plumgood, the VIP suite in “The Shack”—a built-in house within the studio—can handle overnight lodging needs for a cast or crew member. Barn-wood artwork hanging from the walls throughout the studio, backlit by purple LED lights, and old tin add to the Georgia aesthetic.

Co-owner Luke Smith, who has worked construction on sets and prefers being behind the scenes, says he, Plummer and McEachern met on the same set, and as time went on, they all had the same vision for a studio. “We meshed really well and had a vibe and said, ‘Let’s do it,'” Smith says.

McEachern stresses that what sets Plumgood Studios apart is the vibe. It’s quirky, with hallways leading to various rooms and a plan for the opportunities they bring. For example, a screening room is a place where a filmmaker can pitch a project to a potential investor. Or, because the trio detest tables, they set up the seating area in The Shack to accommodate screenings, snacking or lounging. This, they say, is their boardroom.

Around the corner and down a hallway from The Shack, there’s a seamless white backdrop that can easily fit several people in a wide-angle shot. At the studio’s grand opening, Plummer stands, awash in light, and greets the crowd that has gathered.

“This has got a lot of us in here, and we hope this is something that will bring business north [from Atlanta],” he says, drawing a comparison to the culture—not just the technology—created by the computer company Apple. “So, we want to be known for our culture of filmmakers and to create a culture of filmmaking.”