Bear Hollow Bios: The Inside Scoop on Athens’ Zoo Animals 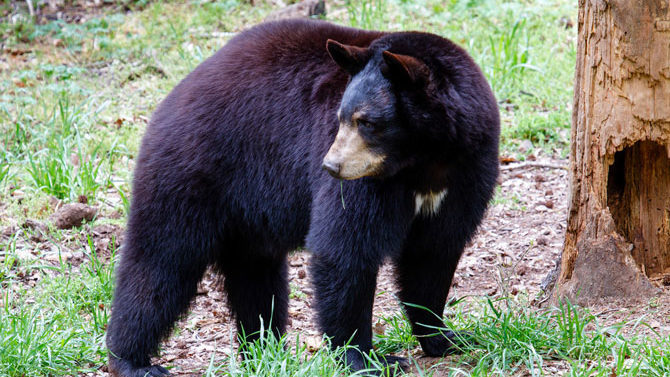 While they’re wild animals, in a way, the residents of Bear Hollow Zoo at Memorial Park could be considered the city’s pets. Injured or orphaned, they depend on humans for survival, after all. Flagpole asked Bear Hollow volunteer Sherrie Hines to tell us more about our furry and feathered (and scaly) friends. [Blake Aued]

DJ, named for former UGA quarterback D.J. Shockley, is our adult male. He was born in 2003, orphaned in the wild and hand-raised at Ellijay Wildlife Rehabilitation Sanctuary. He came to Bear Hollow in 2006. Athena and Yonah are sisters who were orphaned in 2010 when their mother was killed illegally by poachers. They were hand-raised right here at Bear Hollow. All three bears are imprinted on humans and could not be released safely back into the wild, as they would surely approach humans in search of food.

When you visit them at Bear Hollow, you can easily identify them by looking for a few tell-tale signs. Male bears are substantially larger than females, so DJ is usually pretty easy to spot just because of his size. Athena and Yonah are both smaller, but Athena has a white patch on her chest, which makes it easy to differentiate between the two.

Bears can live to be over 30 years old in captivity, so we expect to have all three of them living with us for quite some time. To make sure that they have a long and happy life here, we take their veterinary care very seriously. In between their annual checkups, zoo personnel work with our bears to train them to perform certain tasks that make it easy for us to check their health without having to sedate them. Athena and Yonah have become especially adept at helping us care for them. They know how to stand against the fence so that we can safely administer shots through the chain link, and they also know how to stand on their hind legs and put their paws on the fence so that their keepers can visually inspect them for injuries or abnormalities. We only use positive reinforcement during our training sessions, which ensures that our bears enjoy working with their keepers and that our keepers are able to provide them with the best care possible. 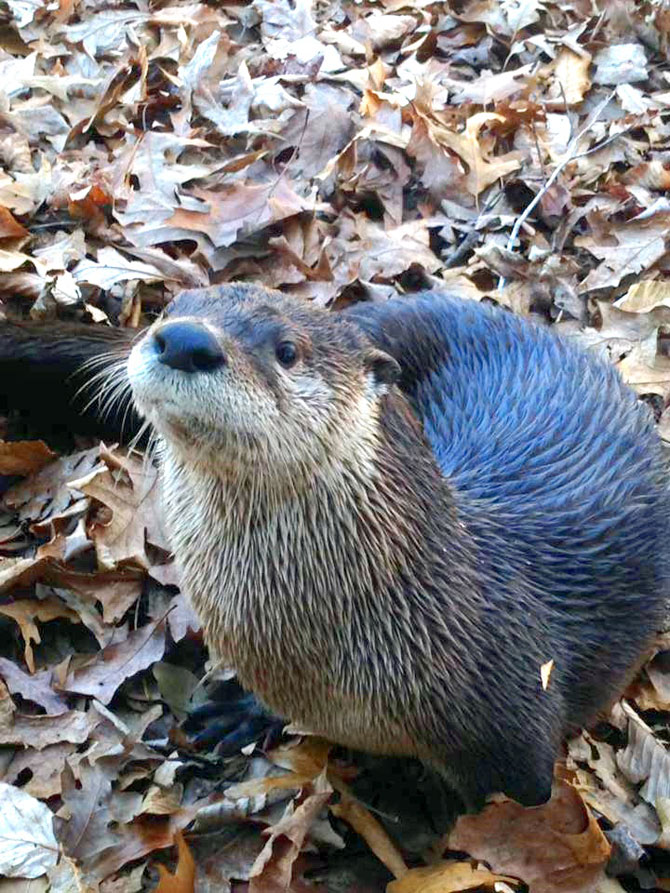 Otterbee arrived in 2015 from the Clinic for the Rehabilitation of Wildlife (CROW) on Sanibel Island, FL. He was orphaned in the wild and rehabilitated at CROW with the intent of releasing him back into the wild. However, he was released on two separate occasions and failed both releases when he continued to approach people, likely looking for food. After failing his second release, he was determined to be non-releasable and transferred to Bear Hollow, as CROW could not provide him with a long-term home.

Otterbee is an intelligent, energetic and curious ambassador for his species, so zoo staff and volunteers work with him regularly on training exercises that help provide him with enrichment by keeping him engaged and mentally stimulated. Enrichment is a process by which zoo personnel provide an animal with activities or items that stimulate their natural behaviors and often provide them with a new challenge or experience. For Otterbee, enrichment might be fish being put in his pond that he has to hunt for or frozen chunks of fish thrown into his exhibit for him to gnaw on. They’re a tasty mental challenge and a fun way to cool down in the heat of summer. 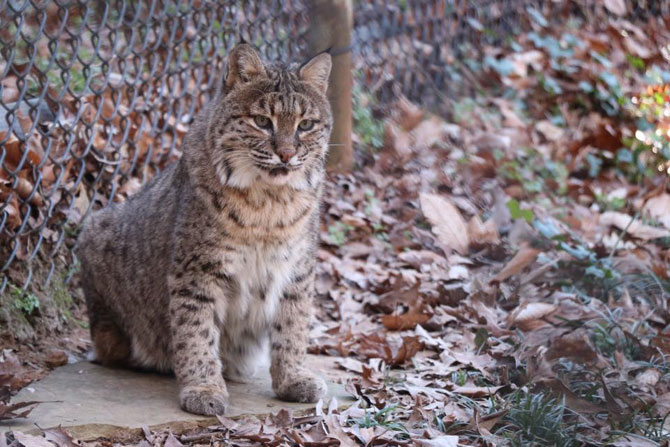 Katie is one of our oldest residents, having arrived at Bear Hollow in 2005. She was born in the wild in 2000, but orphaned at only four weeks of age. She was raised by the Ellijay Wildlife Sanctuary, where she had to be hand-reared in order to survive. Katie is nothing like a domesticated cat, but because she was raised in captivity, she has lost much of her natural fear of humans, and she never learned many of the essential skills that she would need in order to survive in the wild.

Bobcats in the wild have an average lifespan of about seven years, but in captivity, they can live to be approximately 25 years old. At 18 years of age, Katie is definitely a senior bobcat, but we hope that she’ll have many more years with us at Bear Hollow.

As one of our wildlife ambassadors, she helps our staff and volunteers educate zoo visitors about the effectiveness of camouflage. While zoo personnel know many of her favorite hiding spots, even we sometimes struggle to spot her.

You may never actually see a bobcat in the wild, but their native range includes all of Georgia, and they are so adaptable that they are one of the few species that don’t seem to be greatly affected by human encroachment. You can coexist safely with bobcats and other wildlife by not leaving food outside that might attract them, and by avoiding the use of rodenticides that might inadvertently poison them when they hunt for themselves and their young. 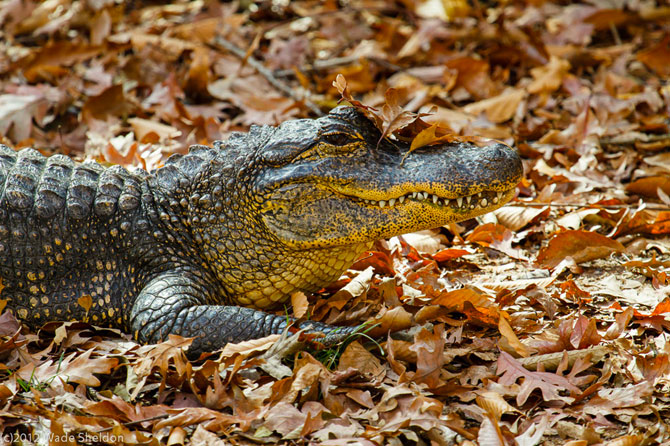 Mazie came to Bear Hollow from the Savannah River Ecology Lab in 2009. At Bear Hollow, she is the queen of her exhibit, and during mating season (April–June), you can often hear her bellowing to announce that this is her territory. But most days she can be found sunning herself on the banks of her pond or enjoying a cool dip in the water. As a cold-blooded animal, she relies on the heat of the sun to regulate her body temperature, and in the winter months, she’ll go into a state similar to hibernation called brumation, which allows her to slow her metabolism and survive during our colder Athens weather.

Mazie is non-releasable because she is reliant on humans for her care. While Mazie is still very much a wild animal, she knows to associate humans with food. If she were to be released into the wild, she would struggle to find food on her own and would likely approach humans, which would be dangerous for her as well as anyone she might encounter. To protect alligators like Mazie in the wild, one of the best things you can do for them (and yourself) is to leave them alone and be sure never to throw food to an alligator or into a body of water where an alligator might live.

Eeyore and Winnie the Hoo were hatched in the wild but came to Bear Hollow after sustaining injuries that made them non-releasable. Eeyore was rehabilitated at the Carolina Raptor Center and arrived here in 2000.

Winnie’s story is more dramatic. She was hit by a car in Indiana, but apparently the driver didn’t realize that they’d hit her or that she was actually stuck to their car. She rode all the way to Athens on the grill of their car. It’s a miracle that she survived the journey!

When they got to Athens, they took her to the UGA Veterinary Hospital for treatment, but as you might expect, she was too injured to be returned to the wild. For a bird to be released after an injury, it has to be able to complete two basic tasks: It must be able to fly and successfully hunt. Winnie wasn’t able to meet either of those requirements, so she has been a permanent resident since September 2008, and she will remain with us for the rest of her life, as will Eeyore.

Great horned owls are one of the largest owls in North America, and you can often hear their distinctive hooting call in your own backyard. You can help protect owls in the wild by avoiding rodenticides, which can harm owls who eat the poisoned mice. Make your home safe for wildlife and enjoy the benefits of nature’s pest control.