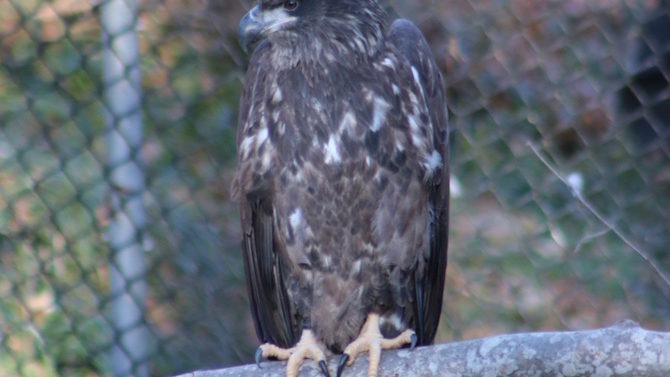 If you’ve visited the zoo recently, you’ve surely noticed that there are now two eagles on exhibit once again. The newest addition to Bear Hollow, Hania, is a juvenile, female bald eagle who was born on the Gulf Coast of Florida around March.

Hania was found by good Samaritans after she apparently fell from her nest while attempting to fledge. She was originally taken to Wildlife, Inc. for evaluation, but they immediately realized that she had a serious issue with her wing and would not be a typical rehab and release. So the next day she was transferred to the Audubon Center for Birds of Prey near Orlando, FL, where they specialize in the treatment and rehabilitation of injured birds of prey.

Their doctors also examined Hania and eventually diagnosed her with a very rare abnormality (likely genetic) where the patagium in her left wing didn’t grow and lengthen as it should. The patagium refers to the layer of skin and tendons that run along the outside length of her wing between her shoulder and wrist. Since it didn’t lengthen as she grew, she can’t fully extend her left wing to enable flight. By the time she was found, her elbow joint was also calcified, and her medical team determined that there was no way to repair her wing to give her full range of motion. This condition is so rare that Audubon staff had only seen one other case like Hania’s in over 26 years.

Hania will never be able to fly normally, but she does have more mobility than you might expect, and she can hop/fly a few feet at a time. It wouldn’t allow her to survive in the wild, but it does give her more freedom at Bear Hollow. Additionally, since this is how she developed naturally, this limitation is all that she’s ever known and is “normal” for her, which makes her transition to living in captivity a lot easier than birds who have been injured in the wild and sometimes have difficulty adjusting to their new inability to fly.

Bear Hollow staff had been looking for another bald eagle to be a companion for Honovi, our adult male bald eagle, after our senior eagle, Amazon, passed away in 2014. Honovi and Amazon were a close pair despite their substantial age difference, and staff suspected that he would have a better quality of life with the addition of another eagle to share his exhibit. At the same time, the Audubon Center needed to find a permanent home for Hania, as they had a large number of eagles and other birds of prey who were in various stages of the rehabilitation process, in addition to other permanent residents who were also non-releasable.

Bear Hollow and the Audubon Center worked together starting in late spring to arrange for a transport for Hania from Orlando to Athens. Bald eagles are heavily protected by both state and federal law, so both organizations had to complete an application process to secure the necessary permits to allow for her to be transported both to a new facility and across state lines.

Once the proper applications and veterinary records were secured, a team from Bear Hollow, of which I was lucky enough to be a part, drove down to Orlando on July 8 to pick her up and bring her back to Athens.

Upon arrival at the Audubon Center, we were treated to a behind-the-scenes tour of their beautiful facility. They have a veterinary intake area where we observed multiple other birds (including an osprey) being prepared for transport, in addition to other new birds of prey that were being brought in for treatment. Even early on a Sunday morning, Audubon staff were busy handling multiple cases with consummate expertise. Dianna Flynt, the rehabilitation supervisor at the Audubon Center, gave us a tour of the facility and introduced us to Hania. She was living in one of their huge flight barns with other eagles who were being rehabilitated. 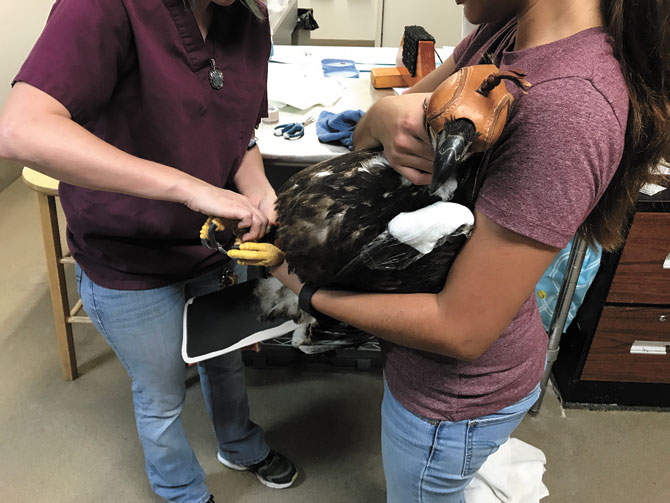 Hania traveled in what is essentially a very large dog kennel with a perch installed inside, but in order to protect her wings and feathers during the trip, they applied “carpal bumpers” to her wings that would help ensure that they didn’t damage her joints if she tried to open her wings during transport. They also applied a long plastic tail guard to prevent her from breaking her feathers and banded her for identification purposes. Finally, they gave her some medication that would help keep her calm during the trip. We strapped her crate into our vehicle and said goodbye to the fantastic team at Audubon.

We have to admit that we were a little nervous about the prospect of spending seven-plus hours in a car with an eagle. Knowing how loud a domestic cat can be on even a five-minute trip to the vet’s office, we wondered if we’d be treated to a screaming eagle all the way up I-75. We also had nightmares about someone hitting our vehicle and injuring Hania. But our fears proved to be completely unfounded. Our trip was uneventful, and Hania was a fantastic road trip companion. She didn’t make a peep the whole way as she traveled in what we jokingly called #carforce1.

When we arrived, we were met by zoo staff, who helped us transfer her to her quarantine mews off exhibit. (As a policy, we always quarantine any new animal for the safety of all of our animals at the zoo.) We removed her bumpers and tail guard, and then she was free to explore her new surroundings. Despite not being a year old, she was bigger than we had anticipated, and many of us stayed far longer than we should have just watching her. She truly is a sight to behold if you haven’t seen her yet, even though she doesn’t yet have the characteristic white head of feathers that she’ll grow once she’s older.

After completing her quarantine, we were all excited to see how she and Honovi would interact once they were introduced to each other. Staff were on hand to observe their first meeting and intercede should there be any trouble between the two. But we needn’t have worried. Their introduction went beautifully, with lots of normal eagle behaviors like reciprocal approaches, wing-flapping and preening, “queen/king of the hill (perch)” games and lots of calm periods of simply being in each other’s presence. 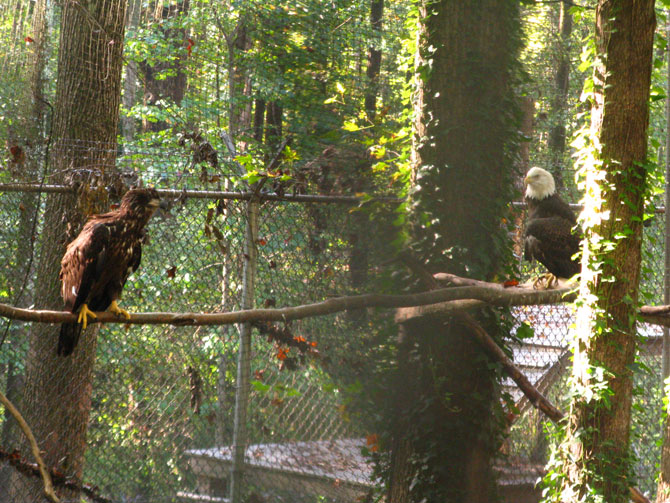 Staff reported that Honovi was extremely excited to meet her and ran right over to sit next to her on her perch and begin preening her when she was first released. Hania, in typical fashion, was not having any of it, and made him give her some space while she took in her new surroundings. We’re pretty sure we know who’s going to be ruling the roost in the future, but the important thing is that they’re both doing extremely well together on exhibit and everything points to a happy and healthy future for them both.

Sherrie Hines is a volunteer at Bear Hollow. This article originally appeared in the zoo’s December newsletter.