Two Athens Churches That Split Over Gay Marriage Start Over 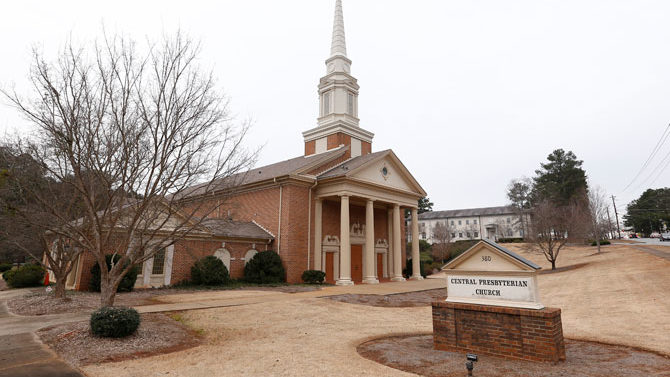 After years of squabbling and months of wrangling, an out-of-court settlement has been reached between Alps Road Presbyterian and the Northeast Georgia Presbytery, a regional body of the larger Presbyterian Church (USA).

Formerly known as Central Presbyterian Church, Alps Road is the breakaway congregation that voted in 2016 to leave the mainline Presbyterian denomination and align itself with the more conservative Covenant Order of Evangelical Presbyterians. Changes in PC(USA) doctrine regarding the ordination and marrying of gay and lesbian members in the church sparked the departure. Other churches across the country have left as well.

After deciding to leave the denomination, the Alps Road congregation filed suit in superior court in January 2017 to retain control of the property. Under PC(USA) rules, the Northeast Georgia Presbytery and the larger church hold property in trust for the denomination’s benefit.

Western Circuit Superior Court Judge Eric Norris said they could continue using the campus. A trial was expected to get underway in January of this year, but the out-of-court settlement likely ends that possibility.

Both sides have agreed to the settlement in principle, although some details are still being worked out. The exact terms of the settlement are confidential, so the financial agreement won’t be part of public court records. Since there hasn’t been a line of moving vans on the Alps Road campus, it seems likely the breakaway congregation will continue its worship and fellowship activities there.

According to a website message from Hilary Shuford, the presbyter for 52 congregations from Augusta to Sautee Nacoochee in the PC(USA)’s Northeast Georgia Presbytery, “the parties have settled the matter, but the terms of the agreement are held in confidence.” Blaine Norris, an attorney for Alps Road, echoed Shuford’s comments, saying, “I’m not at liberty to discuss matters protected by attorney client privilege.”

A vote taken in December among Northeast Georgia Presbytery members was 99-6 in favor of settling. The Alps Road congregation also voted overwhelmingly to settle.

“I feel a deep sense of peace as we let go of the difficulties of the past and move forward into the New Year as Christian sisters and brothers serving in the mission field in Northeast Georgia and the world!” Shuford wrote about the settlement.

“We are very grateful to have reached an out-of-court settlement with the presbytery over the issue of our church property,” Alps Road Presbyterian Church head minister Bob Bohler told the Athens Banner-Herald. “This allows both groups to move forward with Christ’s work.”

Several members of what had been Central Presbyterian fled the church during the doctrinal fracas. Some joined other local PC(USA) churches, while others jumped into new denominations. But last year, some longtime members regrouped as Central Presbyterian and started meeting Sunday mornings at the Presbyterian Student Center on South Lumpkin Street.

There’s a weekly women’s Bible study and an adult Sunday School class. Central Presbyterian members have become involved in missions and called a minister, Rev. Rindy Trouteaud, who served churches in the Greater Atlanta Presbytery and Northeast Georgia Presbytery for almost 30 years. And they are reaching out to UGA students and welcoming both returning and new members.

“It’s a really good feeling to be there on Sunday morning,” Barnes said. “We’ve become a community of huggers, we’re so happy to be together. And we’re rebuilding with 109 years of Presbyterian history.”