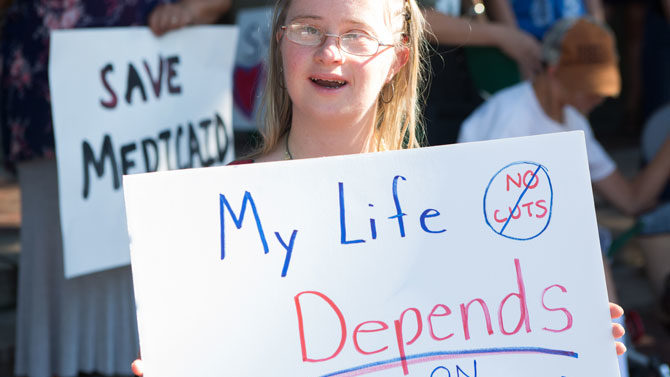 About 75 people gathered at the UGA Arch recently to protest changes in Medicaid and coverage proposed in the latest Republican revision of the Affordable Care Act. Parents, relatives and friends of developmentally and physically challenged children and adults at the event fear cuts will mean reduced or eliminated services that help their loved ones lead safe, happy and purposeful lives.

Billed as a “Rally for Callie,” the July 12 gathering was organized by Five Points resident Jill Gambill, who has a special-needs son. Many of those attending also have special-needs children. “None of us are experienced advocates,” Gambill told the crowd. “This issue is so personal for us.”

The “Callie” of the rally is Callie Moore, a 22-year-old Comer resident who has cerebral palsy, developmental delays and speech and vision difficulties. She also has epilepsy and relies on a feeding tube. She isn’t ambulatory. A few days before the rally, as she was being transferred out of bed to go swimming, one of her femurs broke. She was hospitalized in the intensive care unit, then released, then readmitted with pneumonia, said her mother, Pam Walley. Callie’s hospitalization meant neither she nor her mother could attend the rally.

For all of her challenges, “Callie has a meaningful life,” Walley said. “She goes to movies, she’s involved with [Extra Special People, a local nonprofit], and she likes to be with her friends. And she graduated from Madison County High School this year.”

The COMP waiver serves people in their home or community. Special-needs children and adults also can qualify for a New Options Waiver (NOW), which provides services but comes with a cap of $25,000 per individual. Gambill said there are 12,000 people in Georgia with a NOW/COMP waiver and 9,000 people on the waiting list.

Gambill says Moore remained on the waiting list for a COMP waiver for 15 years before getting it. The current expected wait time is seven years. Gambill said she has applied for a waiver for her son, who is starting middle school in August, and hopes it will come through by the time he finishes high school.

The GOP health-care legislation remains in flux, and Gambill worries that the latest version will give individual states block grants based on past Medicaid expenditures without taking into consideration future needs. What about population growth? The rising number of children diagnosed with disabilities? Inflation? Pre-existing conditions, such as autism? If insurance covers these conditions, will the premiums rise astronomically? Will mental health services be covered?

[Editor’s Note: Since this article was edited for print, the GOP health care bill has been declared mostly likely dead.]

Among those at the rally were Bishop resident Amy Boswell and her daughter, Madison, 13, who is totally dependent on Medicaid, her mother said. Both Madison and her twin brother Dawson are on the autism spectrum, and an older brother has Asperger’s. Madison also has mild cerebral palsy, her mother said. Paying out of pocket for their services would be prohibitive for Boswell.

Kate Windley brought her 5-year-old son Leo to the rally. Leo has a rare syndrome that has resulted in a myriad of medical problems. Medicaid covers Leo’s many medications, as well as the medical-grade pureed food that keeps him alive through a feeding tube.

Also at the rally was Kathy Lynne Sanderson, who moved to Athens from upstate New York two and a half years ago. She doesn’t have a child or a relative with special needs, but she was there, she said, because “we don’t want to see tax cuts going to the rich, which won’t make any difference to them, while these families and children suffer. It’s cruel, and it’s vicious.”

One of the last speakers was Chalis Montgomery, a Barrow County Democrat who’s challenging Republican Rep. Jody Hice. She said she has a brother with Down syndrome and that Medicaid enables him to live independently. “No cuts, no caps!” she said.