An Old Route and New Events at the Athens Twilight Criterium 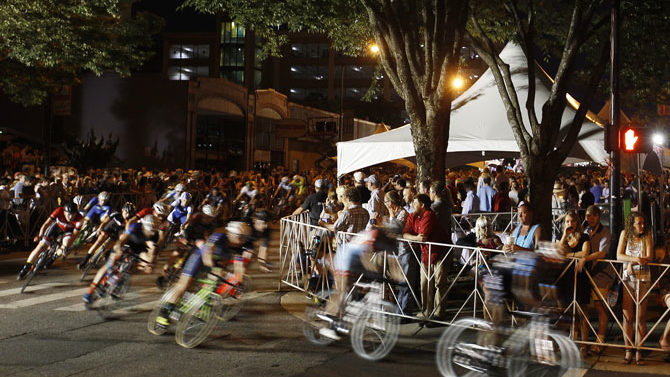 Excitement is building again for the annual Twilight Criterium this weekend, and there’s more to be pumped about than just the main event.

For starters, the popular bike race is returning to its traditional date, the last Saturday in April, after moving to May last year to avoid conflicting with G-Day. It will also return to the route it used prior to 2015—Clayton, Lumpkin, Washington and Thomas streets. The past two years, competitors raced along Hancock Avenue and Jackson, Washington and Hull streets, a change made when construction work was planned for Clayton. The switch back will mean more exposure and foot traffic for businesses along one of downtown’s most shop-heavy streets.

That’s good news for racers as well as spectators, because it brings back into play the world-famous Georgia Theatre corner, a rough turn that tests the best cyclists’ abilities.

“It’s gonna be a hard bike race this year,” says Gene Dixon, founder and director of the Twilight Criterium. “I mean, Dan Holloway’s coming back—he’s won twice—and then there’s a team out of Greenville. Holowesko’s the name.”

The Holowesko squad is made up of guys who, according to Dixon, are “ironically” all from Athens, and he says two to watch out for are Ty Magner and John Murphy. Magner is a former national champion, and Murphy once missed winning Twilight by three inches, “so this team is super strong,” says Dixon.

For those new to the sport, criterium racing has about as much in common with the Tour de France as the Daytona 500 does with LeMans. Over the course of 40 (for women) or 80 (for men) one-kilometer laps, cyclists work in teams to position their fastest riders in “breakaways” ahead of the pack, where they can sprint to the finish line. Wrecks are common—even huge pileups coming around tight corners. Twilight is one of the sport’s biggest events, drawing tens of thousands of people to downtown.

Another cyclist to keep an eye on is Frank Travieso, who’s finished in the top three several times and might retire after this year—although Travieso said the same thing last year, Dixon explains with a laugh.

“Holloway’s the best in the business,” Dixon says, “so we’ll see. It should be good.”

For the women, the favorite could be Tina Pic, a University of Georgia graduate and three-time champ who raced conservatively last year to preserve her overall Speed Week lead. Relative unknown Marie-Soleil Blaise won in 2016.

While the Saturday night men’s criterium is the main event and sees the biggest spectator turnout, there are a lot of other events that people may not know about.

Thursday night, Terrapin will host a party to kick off the weekend. Attendees will have the chance to meet professional cyclists, try the brewery’s Road Warrior brew (a Kolsch-style draft brought back just for Twilight) and participate in a silent auction. The proceeds of the night will go to one of Twilight’s charity partners this year, The Mulherin Foundation.

For a surprise, watch this year’s Red Bull event on Friday, which typically has been a chariot race, but this year the sponsor is reformatting it, and even Dixon isn’t sure what it will look like yet.

Kids can participate in Twilight in a variety of ways, including Saturday morning’s Kids’ Criterium. The Kids’ Zone near City Hall will feature live music Saturday from young performers, including Connor Byers, The Voltures, The Varsity Band and two groups from Nuçi’s Space’s Camp Amped program. 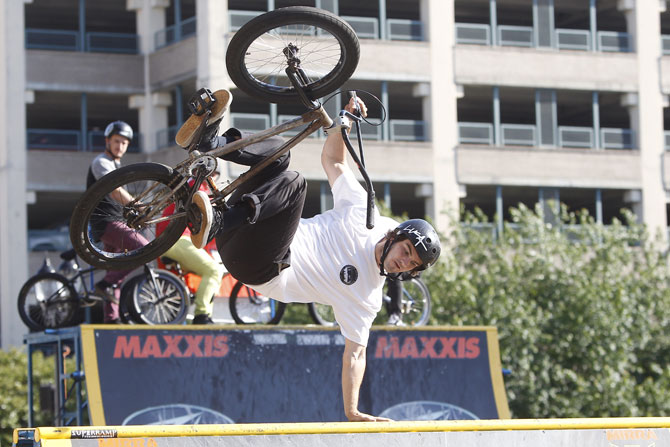 Other events that Dixon is excited about include the always-entertaining BMX competition and the new pump track—a dirt track where cyclists ride without pedaling, using their upper bodies to pump the bikes to keep their momentum.

Following some personnel changes, the criterium is no longer a fit for the goals of Athens Area Habitat for Humanity, the race’s previous charity partner, Dixon says. The affordable housing nonprofit—which also handled logistics and provided labor for the race—left the partnership after inheriting several properties from the late Sol Adams to focus on rehabbing them into rental units. This year’s proceeds are benefitting the Athens Jaycees, a group of young professionals who enhance the community through leadership and education.

“The Athens Jaycees are really helping us out this year,” Dixon says, “and we have a few different charities that are still involved, and we do fundraisers for about five different ones throughout the weekend.”

Below is the full schedule to help you plan for your Twilight experience. For more information, see The Calendar or visit athenstwilight.com.