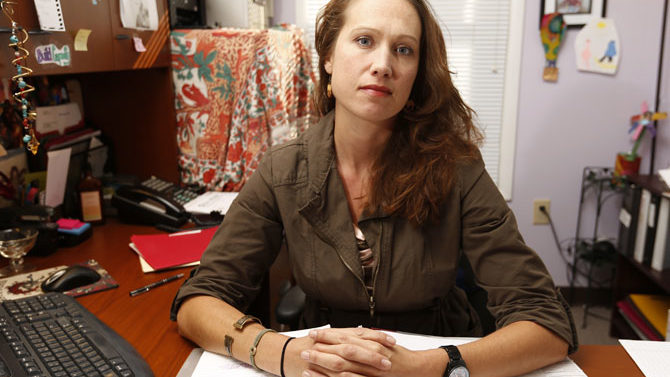 For sexual assault survivors who’ve been waiting years for law enforcement to take action, there’s now a glimmer of hope.

As a result of a state law passed earlier this year, Georgia police departments and the state Bureau of Investigation are working through the physical evidence in thousands of forgotten rape kits that, for whatever reason, were never tested. And the Athens-Clarke County Police Department is ahead of the curve.

The Cottage recently conducted a survey to gauge community needs after poor turnout by city and University of Georgia officials at a screening of the documentary The Hunting Ground in March. The movie follows two undergraduate rape survivors as they fight for justice in the law and in their school.

“We were thinking strategically here,” Sheppard says. The 167 law enforcement officials, educators, parents, elected officials, college students and other residents surveyed helped give her and her colleagues a better idea of what services the community needs.

As a result of the survey, The Cottage will continue to educate law enforcement and Department of Family and Children’s Services social workers on working with survivors, and add permanent rotations of therapy groups for caregivers, children ages 5–10 and teens who have survived sexual assault. They will also work with SANE to hire additional staff and revamp the program as well as put more focus on community outreach.

The Cottage also found that Athens has an opportunity to be a leader in the state when it comes to Senate Bill 304, passed by the state legislature in March, which requires all backlogged rape kits to be sent to the proper authorities for testing. “It’s brand new stuff,” Sheppard says. “It’s a pretty big deal.”

Sheppard, her colleagues at The Cottage and Sgt. Harrison Daniel of the ACCPD Sex Crimes Division have been working to make sure newness isn’t met with naivety.

Sheppard and Daniel serve together on a state expert committee that establishes guidelines for Sexual Assault Response Teams throughout the state, and in July they were invited to serve on a collaborative workgroup charged with creating a statewide protocol for victim notification and overseeing the process for kits being tested under a grant from the New York district attorney’s office to fund the testing of backlogged kits, some of which are sent by the Georgia Bureau of Investigation to private processors. The committee, established by the Criminal Justice Coordinating Council, has representatives from law enforcement, prosecution, advocacy, state crime labs and SANE, offering different perspectives encompassing all the agencies a survivor would deal with.

At the time the bill passed, Georgia alone had a backlog of 3,500 untested kits, 200 of which were collected from Children’s Healthcare of Atlanta, according to End the Backlog, a Joyful Heart Foundation initiative dedicated to educating, empowering and raising awareness for survivors. As of Aug. 24, one in 10 tested kits had yielded DNA results.

“This is something that is really important. It’s becoming an issue, and we want to be at the forefront of it,” Daniel says, “We essentially want to shape the issue, shape the narrative along with it. We don’t want to be reacting to what other people have done. We want to set the bar ourselves.”

That’s why last year, as the issue of backlogged rape kits was gathering steam across the nation, ACCPD sent 163 of its 177 backlogged kits to the GBI a year before the state law was enacted, a move that gave the department a running head-start to beat the law’s Aug. 31 deadline to send untested kits to the GBI. (Fourteen had been destroyed or couldn’t be found.) While it could take several years to finish testing, Athens has already gotten a number of files back.

“Since we already had that happening before the law was passed, The Cottage and the ACCPD came up with a protocol as to how we are going to work with these survivors in revealing the results of their test or notifying them, and then what will happen next after you notify the clients,” Sheppard says. “So that’s why we were the first in the state of Georgia.”

A stack of files the height of a coffee cup sits on Daniel’s desk—the first of the cases to be sent back to Athens after testing. He motions to a filing cabinet in the corner of his office where more are stored, returned with new evidence and awaiting someone to look at them, in some cases for the first time in decades. Right now, Daniel is the only person working on ACCPD’s returned kits, until any are reopened at survivors’ requests or because of new evidence. Once any cases are reopened, they will be added to the existing workloads of other detectives in the unit.

While ACCPD has a protocol for dealing with an assault that has just occurred and just been reported, “what hasn’t really been established is this process, because this is a new problem,” Daniel says. “In some of those cases, we’re going back 10 or 15 years, someone who was victimized in 2000, 2001, and for some reason their kit was never processed fully or wasn’t prosecuted. So now we’re looking at going back to someone a decade later, and we don’t know where they are in life,” Daniel says, explaining the sensitive nature of reaching out to inform survivors of their only-recently-processed rape kits.

“How do you go back and do this right so that you don’t corrupt anything that may help the investigation?” he says, “It’s really using the MDTA, multidisciplinary team approach, where you’ve got everybody’s perspective in there, and we’re not missing anything. Really, the main focus is creating what they call a ‘victim-centered approach and trauma-informed approach.’”

Athens isn’t the first to get started early. Cities such as New Orleans, Dallas and Detroit have also begun getting back backlogged kits and establishing protocols. “Because there’s not a lot of history there, we don’t have a lot to reference in looking at what’s worked and what hasn’t worked, so for us, the biggest issue is that a lot of that is unknown, and we try to maintain or set up a more flexible plan of action so we can adjust on the fly,” Daniel says.

Those larger cities have the resources to dedicate to backlogged rape kits. Athens’ police department, on the other hand, simply doesn’t have the funding to dedicate a team to the issue. “There are major snafus,” Sheppard says. “The law was passed, but it wasn’t passed with the funding to hire additional staffs and all the other stuff needed to test the rape kits. So there will be a lot of them sitting there waiting for additional funding or resources.”

“Personally, I think the best thing we can hope for is that, any instance in the past where there was some level of injustice because things weren’t handled appropriately, that has been accounted for, one,” Daniel says. “Two, that there may be some victims out there that have unanswered questions, concerns, they don’t know who to reach out to. Maybe this will answer some of those questions for them. Maybe it will bring closure in some cases for people who’ve been without closure for who knows how long—years, decades. I think those are the two biggest issues, and I think if we accomplish those things, we will have been successful.”