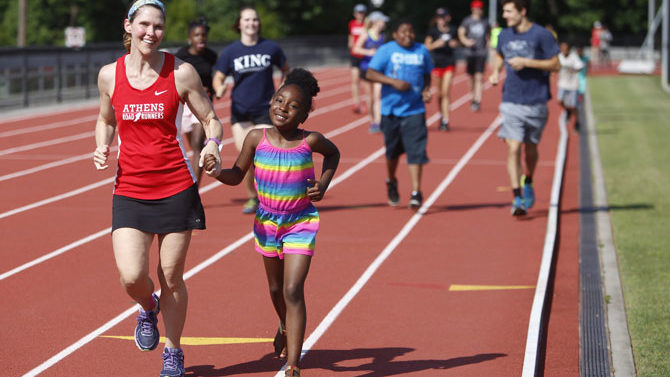 Athens’ Rolling Ridge neighborhood just off of Kathwood Drive north of the Loop is a low-income apartment community, and the high risk for young people to drop out of school and get involved in crime made the neighborhood ideal for a running program intended to help curtail youth delinquency.

The Athens Ridge Runners—so named by the participants, who range in age from 2–16 and all come from Rolling Ridge—are partnered with the Mayor’s Youth Development Task Force, a group appointed by Mayor Nancy Denson to combat gangs. “Commitment to a goal, resilience, determination, ancillary things to fitness” are the qualities that Clarke County School District grant writer James Barlament says the Ridge Runners program aims to foster among its members.

On May 24, during week eight of a 10-week program, seven kids board a bus in Rolling Ridge and went to the UGA track for the second time this spring. Use of the bus is donated by Athens-Clarke Leisure Services, and department director Pam Reidy drives it on a volunteer basis.

Mary Terry, a sophomore who runs track at UGA, has volunteered with the Ridge Runners every week so far, going to either Rolling Ridge or the track to help with the program. As soon as the kids get inside the gate to the track, the majority wrap themselves around Terry, excitedly shouting her name. “I just love it. I love these kids. I love doing it every week. It’s something to do besides class and practice,” Terry says.

Barlament says “the track and field coach deserves a big kudos,” because many of Petros Kyprianou’s athletes have volunteered with the program.

It’s not just college athletes volunteering, though. Many Athens Road Runners, a running club in town and the sponsor of the program, volunteer, including ARR president Paige Cole. She teaches government and history at North Oconee High school, and several students and parents from the school also volunteer, since they have some prior relationships with some of the kids involved with the Ridge Runners. Volunteers commit to showing up most, if not all, Tuesday afternoons, which is when the Ridge Runners meet. The ARR provide snacks, drinks, water bottles and T-shirts.

On this Tuesday, the kids circled up to do stretches; the volunteers shouting “One!” and the kids “Two!” After stretching, the kids ran their first lap around the track. In pink sandals, Kendaijah Yearby crossed the finish line first—though it wasn’t a race—and her face beamed as she was cheered on. A relay race and a few jumping exercises into sandpits, over bars and onto mats finished the afternoon, with Terry heading up the jumps, her specialty at UGA.

Every week Barlament, Cole and others who help out talk with members of the Rolling Ridge community—parents, family members, police officers and building managers. The goal of their conversations is to ask what members of the community want from the program, not what the program wants from them.

Athens-Clarke County police have cited Rolling Ridge as one of the most crime-ridden parts of town. Gunfire isn’t uncommon; just a couple of weeks ago, the Athens Banner-Herald reported that a crowd scattered after four or five shots rang out, and police couldn’t locate any witnesses. There have been at least two gang-related shootings at the complex so far this year. In May, a bullet pierced a 10-year-old’s bedroom.

So Ridge Runners is a way out for many of the participants. The program has served 60 kids in total, with many coming every week. They’ve had as many as 38 on a given Tuesday.

“To be in this kind of atmosphere is kind of rare,” Barlament says of their two trips to the UGA track. He thinks it’s important that they can “see the possibilities of running” and how that can help them in life and in their educations.

During the weekend of the Twilight Criterium last month, 25 Ridge Runners competed in the kids’ 1K, and one of their own won the race. This month, they’ll have the chance to join the ARR All-Comers meet.

Ridge Runners is a pilot program, and the hope is that organizers can build a sustainable model to transfer to other neighborhoods in Athens that could benefit from it. “I don’t want it to stop,” Barlament says. “If nothing else, we’ll be back in the fall.”