Four Athens Has Coding Classes for Everybody 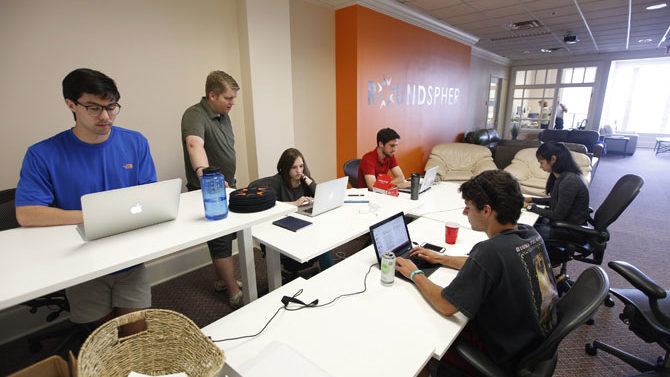 “Let’s demystify what’s going on in your phone,” Jim Flannery says passionately. “Everybody should take a coding class. Even if they choose not to pursue it, let’s demystify.”

Flannery is the herder of cats, as he says, the traffic controller, or if you want to be technical, the executive director of Four Athens, a local organization which helps entrepreneurial startups in the area succeed.

Early last year Four Athens, with the guidance of Flannery, Jordan Burke and Antoinette Stevens, launched coding classes for anyone and everyone—at least, that’s the hope.

“In January 2015 we started to notice that a lot of our faster-growing companies were having trouble hiring, and it was across the board, senior and junior level, you name it,” Flannery says. The skills to fill those positions aren’t easy to come by, and Burke says that even computer science students at the University of Georgia weren’t getting the marketable skills they need, focusing a lot on theory but not so much on practical experience.

Consumers—not just professional coders—can use those skills as well. Flannery and Burke, the adult education director for Four Athens, both deeply believe that the future is technology, and that a basic level of technical literacy is already an important and necessary pursuit. “Teslas that are on the road today are already self-driving. This is not something that’s in the future; it’s happening now. Technology is eating us alive,” Flannery says. His goal is to convince everyone that they can learn to code, saying that the middle-class workforce of the future is going to be heavily computer-science based.

They also have a little bit of a political agenda. Flannery wants Athens to be a forerunner in the field of technology. “Let’s let Athens be ahead of the curve in something,” he says. “Too often I think that Athens is reactionary instead of visionary in its change. This is an area, I think, where we could lead.”

The skills themselves can be political, too. As Burke puts it, “having an understanding of technology is going to become vital to the democratic process.”

Classes are taught by professional coders. Much of the program’s focus right now is on training the teachers, and Burke says they are talking with the College of Education at UGA, getting feedback on structure and curriculum. The curriculum for kids as young as 7 was created mainly by Burke and Stevens, then a UGA computer science student who moved away after graduating.

“One of our challenges is that the parents that understand it’s important will do pretty much anything to get their kids into these classes. The parents that don’t, we don’t yet know how to communicate with them that this is important,” Flannery says. Eventually he wants to start outreach programs that go into communities and offer sessions to educate people on the importance of technological literacy.

But knowing that something is important isn’t always enough. Burke says the No. 1 thing people who think they can’t code say is “I’m not good at math.” That doesn’t matter, he says, “because that’s what computers are good at,” so it’s a fairly common misconception that only mathletes can code.

“I would love to do more learning by doing, having more startups and more established companies take risks on junior developers and giving them practical experience,” he says. “We’re not there yet, but it’s coming. Because that’s really the biggest thing—the more practical experience you can get at something, the more things stick and the more it’s going to make sense.”

While anyone can learn to code, the methods differ for different ages. While adults start at the beginning, the kids take coding on with a more thrown-into-the-deep-end approach. “With the adults, we definitely teach more high-level concepts like the theory behind why this code does what it does. With the kids it’s more, ‘Here is how you would do this, now break it,’ essentially,” Burke explains. He says this is effective because kids have more of an exploratory nature, while the adults are there to learn a particular skill or gain a particular toolset so they can take their career to the next level.

This year the program has expanded from three or four schools to 11 or 12. Four Athens’ goal is to teach 400 kids how to code, with half of them being on scholarship. “We don’t want money to ever be an issue. We understand that the classes are expensive, but they kind of have to be,” Flannery says. The program has worked with the Girl Scouts of America as well as Chess & Community, a local outreach program for kids.

Another long-term plan is to have a computer lab and instruction space downtown so that kids without computers can have a dedicated place and tools to use. Flannery says schools will eventually have mandatory technology literacy classes—some high schools are already moving in that direction—and when that happens, the program will become less oriented towards training kids and focus more on adult education. He hopes to make a small dent in the half-million unfilled software jobs in the country—positions that can’t be filled by the mere 60,000 computer science graduates every year.

For those who do go through the coding classes, the success rate is high, and most are still living in Athens, feeding back into the city’s economy with their new skill sets. Of the first class taught through the program, made up of four students, two have gone on to land developer positions or contract positions in town, and a third is running his own startup, according to Burke.

“Our biggest challenge is scheduling the classes so we have enough spaces and enough teachers,” Burke says. Right now, they teach in several locations aside from the schools they go to. UGA has lent them space in the Broad Street design studios. They’ve taught in the Tree Fort, which is the Society of Entrepreneurs’ spot in the Bank of America building downtown, the Four Athens Hancock Street office, the Quad in the Bottleworks and the RoundSphere solo labs at One Press Place.

Although school-based classes have wound down for the year, Four Athens is partnering with AthFest to teach classes during the festival, will put on two summer camps (not open to the public) at Athens Academy and will offer several adult classes throughout the summer where you can take classes on web fundamentals or intro classes for the coding languages Javascript or Ruby, among others. Go to fourathens.com for more information.