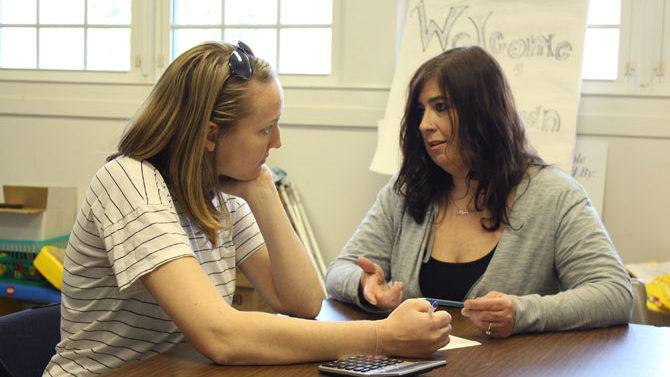 From the outside, taking out a loan from a payday lender or a title pawn company seems simple enough: You sign some paperwork and that day walk out with some cash. But what happens after 30 days, when it’s time to pay up? For most people, that’s when the trouble starts.

A new program offered by The Ark in conjunction with Georgia United Credit Union aims to give Athens’ working poor a better option. The recently launched Common Wealth Athens pairs personalized financial education with a loan program through the credit union to help low-income workers get out from under their predatory loan. Not only does the process help these residents define financial goals and stick to them, but it also helps them improve their credit, get them a bank account and end up in a better financial place.

“It’s a great program. It has opened up a lot of doors for me as far as not having to deal with that stupid pay card,” says Leah Knight, a Jackson County resident who started with the program last fall. At the time, not only was she struggling to pay a predatory loan, but she also couldn’t get a bank account. Instead, each paycheck was deposited onto a debit card. “My paycheck goes to the bank now,” she says.

For thousands of Athens residents who live at or below the poverty level, getting quick cash from a payday or title pawn company is part of life. Since many jobs don’t pay enough to rent an apartment in the area—and with regular expenses such as food, transportation and child care—it’s easy to come up short. Payday loans can seem like the only way out.

But this debt soon balloons into a larger issue. After seeing so many of her clients come in with that seemingly insurmountable debt hanging over their heads, Lucy Hudgens, executive director of The Ark, which provides families with money for necessities like rent or utilities, says it was time to create a program to directly address the issue.

“Common Wealth Athens is a program that offers unique financial products to enable our working poor to gain more momentum in the community and in their personal life,” Hudgens says. “It takes into account the daily stressors they encounter in their life, and the idea is that, while providing these financial products, we’re essentially providing a path toward greater self-sufficiency for our working poor.”

The idea for Common Wealth Athens came from a similar program in Charlotte, NC. A donor to the Athens Area Community Foundation approached Delene Porter, the foundation’s CEO and president, about creating a financial literacy program to help the working poor in Athens. “He sat down and said, ‘Tell me what’s going on in the community in the form of financial literacy,’” says Porter. “Fairly early on, the Community Foundation realized that credit scores were a huge barrier keeping people from accessing affordable housing. Even employers are starting to look at credit scores.”

Credit scores—and what affects them—are one financial aspect addressed by Common Wealth Athens, says Stephanie Cockfield, program coordinator for The Ark. Cockfield leads classes and one-on-one sessions with clients teaching them about setting financial goals, disputing items on their credit reports and working with the credit union to pay off their loans. She also contacts lenders to get the payoff amount of clients’ loans, which is often easier said than done.

Typically, a payday-type loan is due in 30 days. If it’s not paid in that timeframe, the company offers the customer an out—close the loan and issue a new one in the same amount. Except the client must first pay a new loan origination fee, as well as interest. Thirty days later, the cycle continues. These are loans typically in the $400–$700 range, says Cockfield, and their clients have recycled the loan on average nine times before seeking help to get out of it. But this usually means they’ve paid hundreds, sometimes thousands of dollars in fees and interest along the way.

“I was in a loan with Security Finance that was $70 a month. The next month I’d be struggling to pay it, and they said, ‘Well you can renew and save $12 a month,’” says Knight, who found out about the Common Wealth Athens program after looking for help paying her family’s electric bill. “And here I was with a loan I should have been able to pay off—it was a $300 loan, and we had paid in $800, $900.”

Through Common Wealth Athens, Knight now has a low-interest loan (around 3 percent) through Georgia United Credit Union and a plan to have it paid off in the next two months. With Security Finance, her interest rate was around 28 percent, and she was making no progress in paying it off. Cockfield says some predatory lenders end up charging more than 200 percent interest.

Knight says the program has also helped her feel more empowered. She now has access to a bank account and has money in savings. And she’s teaching her two youngest children, 11 and 17, the value of building their credit and not spending their money without a greater plan.

“It’s very much like, ‘Listen, we recognize that you are the backbone of the American economy, and unfortunately the American economy does not pay its backbone well,” Porter says, “and you are valued and every dollar that you earn is of value, and this is a program to help you regain control over that value.’”