As Apartments Creep East, What’s Next for Potterytown? 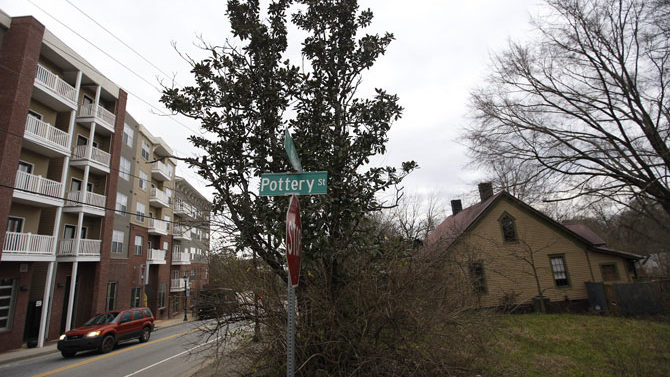 The historic neighborhood of Potterytown just down the hill from downtown is quickly becoming Student Apartment Town.

Already, the neighborhood has seen three student apartment buildings rise up across East Broad Street—Georgia Traditions, The Eclipse and 909 Broad—and another, The Mark, is under construction on the other side of the railroad tracks. Most recently, Drive-By Truckers’ Patterson Hood and his wife, Rebecca, sold their home to a subsidiary of Landmark Properties, which is building The Mark nearby. Landmark has also quietly acquired five other parcels adjacent to the Hoods’ off Pottery and Wilkerson streets.

One of the smaller neighborhoods in Athens, Potterytown is located on the western side of the North Oconee River, consisting of the local landmark Weaver D’s Delicious Fine Foods, a handful of other businesses and warehouses and a couple dozen old mill houses. The neighborhood grew up around Athens Pottery Works, which appears in an 1889 city directory—although homeowners at that time held a variety of jobs—and shards of sculpted clay are still rumored to surface occasionally.

Although some of the houses in the neighborhood may be in slight disrepair, “they are important because they represent an era in our history,” says Amy Kissane, executive director of the Athens-Clarke Heritage Foundation. Wiping out that piece of history from the landscape of Athens not only means luxury student housing takes over another valuable section of our limited downtown; it also means downtown will become that much more blandly homogenous, says UGA professor Pratt Cassity.

Athens does have many designated historical neighborhoods that are protected from development, but in order to become a protected space in this way, property owners have to pursue local historic designation; they haven’t in this case, Kissane says. That may be because the majority of homes in the neighborhood are renter-occupied, with the owners living elsewhere. Twelve of those properties belong to the trusts of either Edward Mingledorff or Peggy Williams, and it’s easy to imagine that a good price for those properties would outweigh family sentiments.

In 2008 Cassity, director of public service and outreach at the UGA College of Environment and Design, led a charrette that was intended to envision and plan a positive, proactive plan for Potterytown, which was undergoing development pressures at the time. More than 50 students, neighborhood residents and planning professionals gathered at the old Jittery Joe’s roaster (which was torn down in 2014 to make way for The Mark).

“There was a lot of input, a lot of field work, and what I thought was a pretty good analysis of space and how it goes down to the river and how it’s a transition from downtown,” Cassity says. “We looked at a lot of density models; we presented to the neighbors; we presented to the folks we normally call stakeholders. They reacted positively and said, ‘Yeah, this is better than the canyonization of East Broad.’”

But when Cassity and his team were asked to present the plan to attorneys representing the property owners, they were shot down. “The idea of not getting the highest density allowable was something that should not be put into print or recommended,” they said, according to Cassity. “Sensitive development of the land was not their goal. They wanted maximum development.”

Maximum development, in this case, means 200 bedrooms per acre, the highest allowable under Potterytown’s commercial-downtown zoning, put into place there during a county-wide rezoning in 2000. “We invested a lot in infrastructure thinking it would flip commercial, but it never did,” says Doc Eldridge, Athens’ mayor from 1999–2002. Athens-Clarke County spent millions on a new pedestrian bridge over the river, the greenway and the Multimodal Transportation Center during the early aughts. Eldridge thinks environmental contamination, bedrock that would require blasting and part of the neighborhood being in a flood zone scared away developers.

Members of the now-defunct ACC Economic Development Foundation tried to thwart student-housing expansion in the “river district” with a taxpayer-funded plan that included offices, shops and entertainment options along the North Oconee River. But ACC commissioners were skeptical of the numbers, and Atlanta developer Selig Enterprises swooped in to buy the river district’s centerpiece, the former Armstrong & Dobbs property, later bought by Landmark when the Selig development went belly-up.

Landmark started assembling parcels farther down the hill last April, paying $800,000 for the Hoods’ quarter-acre. The deal was contingent on Landmark allowing Orange Twin—the conservation community in northeastern Athens run by the Elephant 6 music collective—to move the house there. But due to record-setting rainfall, Orange Twin wasn’t able to complete the move within the 60-day window. Patterson Hood wrote a semi-public email to Landmark CEO Wes Rogers asking for an extension, but in a stinging reply, Rogers refused, citing the costs his company had already incurred.

Rogers has said he plans to rent out the house for the time being and would make “reasonable” accommodations for moving the house if and when the property is redeveloped, but he’s declined to say what his long-term plans are. But it stands to reason that the house won’t remain forever; there’s no way Landmark could recoup its investment by simply renting it out.

When the seemingly inevitable high-rise development is built there, the canyonization of East Broad Street will continue a little further down the hill: bland concrete blocks coming up around you, causing darkness, a change in air currents and blocking off of natural resources, as Cassity explains the term. It also causes an awkward shift from downtown to the low-density residential Chicopee-Dudley area on the other side of the river. Cities gradually grow from high-rising buildings in the center, gradually stepping down in size and imposition to meet with the neighborhoods outside the center. What we are seeing now is a dramatic and unnatural shift causing an unsightly view, Cassity says.

Another UGA CED professor, Jack Crowley, along with his students, created the downtown master plan in 2014. The river district, which contains Potterytown, is laid out on page 17 of the master plan, which is available online. His plan contains low-density housing which would preserve some of the historical aspects of the neighborhood, as well as an amphitheater, park, restaurant, artist studios and even a dock where you could rent boats and paddle on the river, similar to some of Cassity’s charrette’s features. As it stands, though, without local government investment or tax breaks, the master plan can only advise developers.

“I bemoan the fact that we hear all of these creative cities doing creative things, and if any place should be ripe for creativity it should be Athens, GA,” Cassity says, “but it seems like it’s doing the opposite.”

Crowley says he expects more student housing on the east side of downtown, where there is less organized opposition, before developers turn to the west side. “Hill Street, Boulevard and Pulaski are very tough, not in a bad way, but very vocal neighborhoods,” he says, which may preserve the old neighborhoods a little longer yet.