How to Celebrate Retirement? Ride Across the Country on a Bicycle 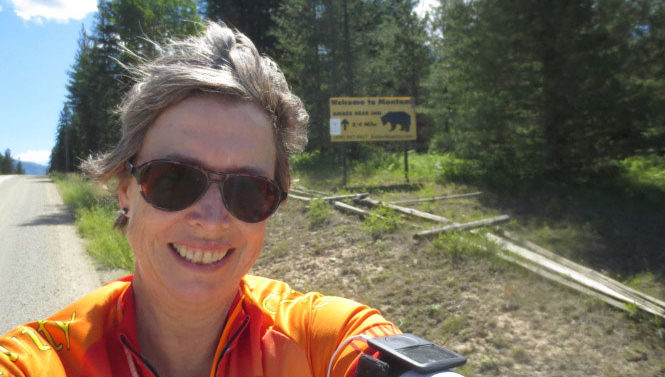 For 30 years, Carol Myers worked in higher education in the state of Georgia. Now, to hear her tell it, calling from a campsite near Birchwood, WI, she is in the middle of a very different type of challenge.

“A bunch of years ago,” Myers says, “I was in an Athens Regional waiting room, and there was an Adventure Cycling magazine. I read it cover-to-cover, and I said, ‘These are my people.’”

Inspired by the magazine and by her recent retirement from Athens Technical College, Myers is biking across the country on what she describes as an “adventure to start the next part of my life.”

She explains: “I retired May 1; that’s the thing that allowed me to do this. I wanted to be moving forward to something, rather than exhaustedly leaving my rather challenging and stressful job. This past fall, it was pretty demanding at work, so I decided I needed something to move forward into, in a positive way.”

Myers’ journey, sanctioned by the Adventure Cycling Association, will take her across the United States, 4,144 miles from Anacortes, WA, to Orr’s Island, ME.

“I’m doing this very challenging thing; I don’t think I really realized what a challenging thing this was before I left,” Myers says. “Now, I feel like it’s a rite of passage, the passage into this new part of my life.”

In preparation for the trip, Myers biked over 3,000 miles around Athens and spent a large amount of time reading and researching. 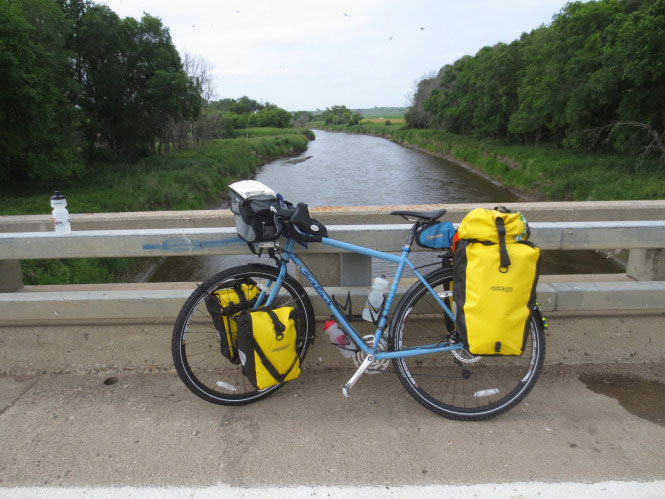 Myers carries everything she needs for her trip on her bicycle, including water, food and camping equipment—often weighing over 90 pounds.

“Last fall she started shopping for bicycles and sleeping bags and tents and reading hundreds and hundreds of pages of material on the web,” says Myers’ husband, Richard Saunders, from their home here in Athens.

Aside from physical training, according to Myers there are mental qualities needed to complete a cycling trip of this nature.

“Persistence, day in day out. You have to have that. Just keeping going through the tough times. One of the things is just doing it—taking it each day and not getting overwhelmed by the whole thing,” Myers says.

Though Myers made a great deal of preparation, she was initially uncertain about her ability to complete the trip—fears that were quickly allayed.

“When I went over Washington pass—it’s like over 6,000 feet—that got me very emotional, being able to do that. That was a sign that I could do the whole thing, and that was, like, on day three,” Myers says.

Throughout her journey, Myers has been regularly updating a blog cataloguing her travels. After teaching freshman composition at Athens Technical College and working as an administrator, blogging seemed an appropriate way to capture the trip. Follow her at cyclingintothefuture2015.wordpress.com.

“It’s a way to record what’s going on and to reflect on it. It’s easy to do, as long as I don’t get too judgmental,” she says. “In a way, I’m writing it like I’d write out a practice essay for my students, or writing a memo. I just wanted a way to capture it, think about it, reflect on it.”

According to Myers and Saunders, many people comment on her bravery in undertaking this venture. 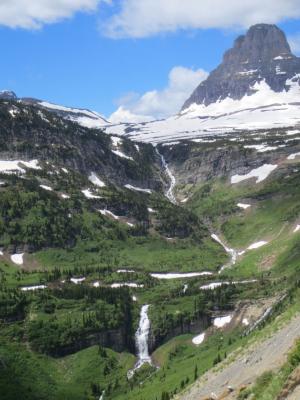 Myers completed the Going to the Sun Road, the only road that crosses Glacier National Park in Montana, on June 19, day 20 of her trip.

“The first thing they say is, ‘Oh, what a brave woman,’ but I think, in one way, more of the people who say that really have no idea what they’re talking about. It’s not a matter of her being on the road totally by herself without any way of communicating. There are other people doing the same thing with [her]. It’s like a bunch of people all going on the same pilgrimage,” Saunders says.

Myers agrees. “I don’t really think of myself as brave. I think it would be braver if I was scared,” she says. “I think you have to believe somewhat in the goodness of people. If you have this mindset that there’s trouble out there, then that’s gonna be really hard.”

On the contrary, Myers has had many positive experiences with the people she has met on the trip.

“In Minnesota, [I stayed at a bike hostel that] used to be a barn, owned by this guy, Don. He’s converted his whole barn into a hangout, with a couch and refrigerators with everything a cyclist could want,” she says. “There have been a couple of places like that. This guy had some Bibles, this other guy had some Christian literature, but really subtle. I wrote on my blog, ‘This is Christianity at its best.’ It’s just people doing these really nice things.”

“I met [Hannah] right away, and she’s just young and really didn’t know what she was getting into. I didn’t want to commit to anything, but I said, ‘Hey, I’ll keep in touch with you, and we can sometimes be together,’” Myers says. “It ended up being really good, despite the fact that there’s 36 years between us. We get along really well. I feel like I’ll know her forever.” 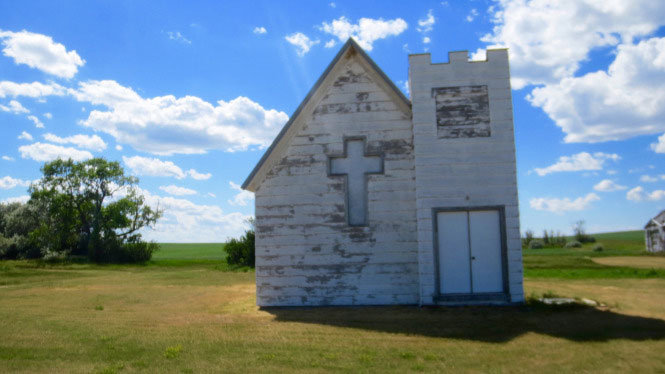 As a part of her blogging regimen, Myers regularly uploads photographs of the scenery on her route, such as this church on day 27 in Montana.

Ultimately, Myers believes that this experience will be one that she carries with her for the rest of her life.

“I think it’s one of those things where you do these things and it’s really tough, or you do these life-altering things, and in the moment there are days where it’s too hot, or you’re tired, but in the end, it ends up being rather life-changing.”