With Apps Like Tinder, You Can Swipe Your Way Out of Singleness 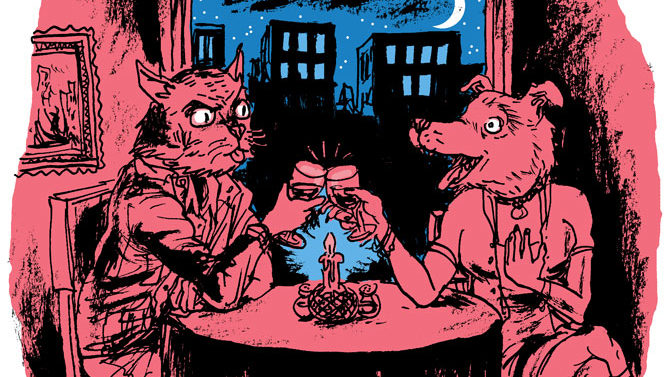 On the most romantic day of the year, many people who are reminded of just how single they are will turn to dating apps like Tinder. Some guys have matched with Sophia Griesenauer in pretty creative ways.

“This one guy told me the story of his life, and it was the story of Harry Potter, like he pretends it was his life,” says Griesenauer, 21. “It was really funny. It was really creative, so and I responded with like my story as if I was Cinderella. So that was a pretty fun startup to a conversation.”

Looking at Tinder—an app where users look at profiles of potential dating partners, then swipe right if they want to meet and left if they don’t—can be just as entertaining as what comes after. That’s one reason why, as CEO Sean Rad recently told Forbes, Tinder users swipe through 1.2 billion profiles a day, making more than 15 million matches.

Over one-third of couples married between 2005 and 2012 say they met online, according to a study published in the Proceedings of the National Academy of Sciences. Online dating is nothing new and is probably here to stay. While websites and apps like OKCupid, eHarmony and Match.com have been around for at least a decade, Tinder, created in 2012, is a newer way to online date.

Tinder is a mobile app designed for connecting people in the same geographical location. To get started with Tinder, you download the app and sign in using Facebook. (Don’t worry—it won’t post anything to your Facebook page.) The app then generates profiles of users within  a specific-mile radius, which can be adjusted in the settings. Profiles include a first name, age, a few pictures, mutual Facebook friends and likes and an optional bio. When users’ pictures pop up, you can either swipe left for “no” or right for “yes,” meaning you like their picture and would like to match with them. If that person also sees your profile and swipes right, you two are matched and can then start chatting with each other.

As a dating app, Tinder can quickly allow you to start a conversation with a potential date that you wouldn’t have met otherwise. Although the app often has a stigma of being a hook-up app, people use it for all sorts of things. So if you’re on the single train and don’t want to be on it Feb. 14—or just want a distraction—Tinder might be of help to you.

Dating Through a Screen

“I don’t think I would have ever met him if I wasn’t on Tinder,” says Morgan Pruett, 19, a student at Athens Technical College.

Tinder introduced Pruett to her boyfriend of eight months. Last spring, after getting Tinder as a means of entertainment for a friend and her, Pruett matched with a man in the military living in Columbus, GA, talked with him for about a month and then went on a first date. Pruett’s friend also matched with a military man in the same area, so their first date was a double date. The date went very well for Pruett and her now-boyfriend, but that wasn’t the case for her friend and her match. It’s often hit or miss on Tinder.

Not all of Pruett’s Tinder matches worked out, either. “You could either find the love of your life or your next stalker,” she says. “I made the mistake of giving my number to this guy who turned out to be kind of a stalker. He blew up my Snapchat, and it was just really overbearing. I almost changed my number, but I figured out how to block him and it ended up being OK.”

The swiping and usability of Tinder make it feel almost like a game. Even when most people don’t have any serious expectations from this dating app, they still enjoy the entertainment aspect.

“I think the layout of the app itself makes it just fun to swipe more so than the meaning behind it,” says Hannah Hester, 21, a marketing major at UGA. Hester says she often “binge Tinders.” Although she has downloaded Tinder, deleted it and re-downloaded it multiple times, Hester said she thinks she’s done with the app for a while. “I always tell myself I’m done with it until I just have a bored Sunday night and run out of social media to look at,” she says.

Jason Flynn, 24, a stand-up comedian and former University of Georgia student, has only used Tinder occasionally, so his profile is a bit out of date. “I had a really large ginger beard at the time that I’ve shaven off since then,” Flynn says. “I still have that beard in some of my pictures, so I would just get a lot of people like, ‘Oh my god, I love your beard.’ And then I would not talk to them.”

But he’s found another use for the app: spotting animals in profile pictures and saving the pictures with the hashtag #animalsofTinder. “It started as a weird thing where all my friends were trying to find their friends and people they knew on Tinder and swipe them,” Flynn says. “And I started realizing swiping through people that a bunch of folks on there have a lot of photos from ‘when I went to this place and rode a camel,’ or ‘this time I caught a fish’ or ‘this time I petted a tiger.’ I just thought it would be goofy to continue to kind of show everybody about.”

So far, Flynn has found 597 animals on Tinder. Right now, #animalsofTinder is just a personal project, but Flynn has plans to turn it in to something more. “I’m trying to start up like a live version of a late-night special like a Fallon or Seth Meyers-type show, and I want to do an Animals of Tinder as a part of the show.”

People who don’t even have an interest in actually connecting or dating anyone can still benefit from the app. Apps like Tinder open up new possibilities of relationships, whether they are romantic or friendly. A person who is moving to a new city, like a student newly settled in Athens, can use Tinder to help make new friends.

Flynn used Tinder and OKCupid when he relocated from Athens to Atlanta to meet people outside of the comedy friend group he already had in Atlanta.

“I work crazy hours,” he says. “I work six days a week, and it’s mostly nights. And I work a lot of doubles and things like that. It would be difficult for me to meet people without that kind of preplanned thing.”

Chris Shotick, 24, a UGA business student, says he originally downloaded Tinder last spring to help him meet new friends when he was preparing to move to Savannah for the summer. Shotick actually ended up connecting with people he already knew. He reconnected and is now dating someone he knew in high school but hadn’t talked to in several years.

Recognizing people you know from real life is a common occurrence on Tinder. “It’s always a big decision to match with people who you recognize in real life, and then whether or not to acknowledge it after you have,” Hester says.

But making a connection—even through your phone—is a better option than staying in and drinking alone this Valentine’s Day.

• Include pictures of you with animals. Yellow labs always pull at the heartstrings.

• Showcase your romantic and artsy side with pictures of you playing an instrument.

• Do not include mirror selfies. They make you look like a douche.

• Do not include shirtless or bikini selfies. See above.

• Include pictures of you on a mountain or chilling in a hammock to attract people who are as outdoorsy as you are.

• Hinge: Instead of profiles of strangers, you only see profiles of people with whom you share Facebook friends.

• The League: This app only matches you with people very specific to your interests and accomplishments. It also hides your profile from anyone in your current network, so you don’t have to worry about your coworkers knowing you’re looking to date.

• Double: For people who might want to try out online dating but don’t want to do it alone, Double allows you to take a buddy.

Swipe for Things Other than Dating

• BarkBuddy: Allows you to find fluffy singles in your area. Developed by a company called Bark & Co., the app connects you to cute pups nearby that need a home. You can swipe through profiles of dogs just like on Tinder. If you find a puppy you like, you can reach out to adopt it right through the app. Puppies need love, too, y’all.

• Skylight: Planning a move to New York? Check out this app to swipe through potential apartments.

• Lettuce: Choosing a restaurant can be a tough decision, especially if you’re in an unfamiliar city. With Lettuce, you can swipe through restaurant options in your area.

• Daily: A way to save and share content by swiping through pieces that are hand-selected for the app. You can select categories so the app will cater to your interests.