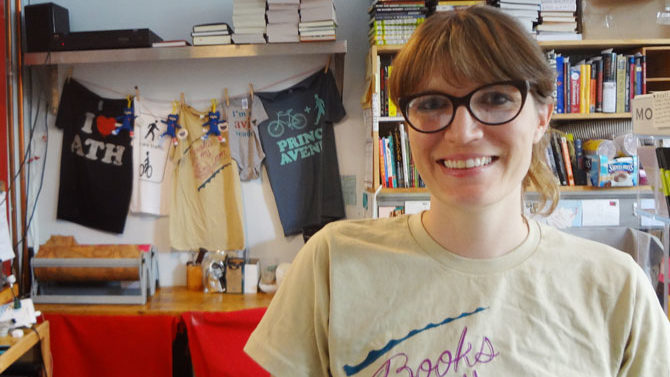 A sign posted in Avid Bookshop warns customers about the “community-unfriendly website named after a South American River.” It’s typical of owner Janet Geddis’ approach to competing against Amazon’s existential threat—educate consumers, but don’t be shrill about it.

“When customers mention Amazon, it’s usually students who may not have the experience of shopping in a local bookstore before,” Geddis says. “We don’t want them to feel guilty. You’re free to shop where you want to shop.”

Still, “it’s hard to talk to [students] about that without being preachy, if they come in here at all,” she says. But that’s starting to change—young interns clue their classmates in to Avid, just like other local landmarks like The Grit. A lot of students from metro Atlanta who’ve never shopped anywhere like Avid find out they love it, often comparing it to the bookstore in the movie You’ve Got Mail, Geddis says.

Indie booksellers often talk amongst themselves about the best way to push back against Amazon’s encroaching hegemony, Geddis says. The consensus is that a head-on public awareness campaign “comes across as this little tiny fist shaking at this behemoth.”

Nonetheless, the store is filled with pro-local messages, ranging from posters to Athens-themed T-shirts to “love your local” bookmarks. And Geddis says she and her staff are happy to discuss the pros and cons of shopping online versus shopping at a locally owned business (better service, giving back to the community) and why Avid’s prices are by necessity higher than Amazon’s (overhead, lack of clout with publishers).

“Sometimes, those customers transfer the majority of their business to us, which is kind of rad,” she says.

That’s because, even if the corner store can’t beat Amazon on price, a website can’t offer truly personalized customer service. “We don’t use any kind of algorithm to recommend books,” Geddis says. “We talk to people in person or sometimes over the phone.”

A state law that took effect last year requiring online retailers to collect sales taxes was supposed to help level the playing field, from a financial point of view. (Previously, only those that had a brick-and-mortar presence in Georgia were required to do so, which meant many online goods were at least 7 percent cheaper than those bought in stores.) The state Department of Revenue won’t say how much sales taxes Amazon has remitted. “Any tax information regarding a company or individual is confidential and protected by law,” spokesman Nick Genesi says.

Geddis says the law hasn’t had a measurable impact. “Our sales have continued to go up year by year, which is awesome, but I haven’t had anyone come in and say, ‘We’re going with you because Amazon is charging taxes now,'” she says. “And I haven’t heard anything about it in the book world, either, which is odd.”

However, she says the indie book world is hopeful about its ability to resist Amazon’s global takeover, pointing to children’s book publisher Usborne, which cut ties with Amazon and is “doing great.”

While, as Geddis notes, “bookstores were their first target,” Amazon is now taking on everyone from grocery stores to television networks, decimating Athens’ big box chains in addition to its Main Street businesses. And while those chains don’t keep money circulating in the community like locally owned retailers, they do employ local residents—which Amazon does not.

K-Mart, Circuit City and Borders are among the local chain locations that have shut their doors in recent years. Others, like Best Buy, have moved, and still more, like Barnes & Noble, Sears and JCPenney, are teetering on the edge of bankruptcy.

That’s not entirely Amazon’s fault. Our suburban commercial corridors like Lexington Road and Atlanta Highway look down at the heels and lack connectivity, which is something Athens-Clarke County officials are working to address. But online competition is a contributing factor, says Commissioner Jerry NeSmith, who represents the Atlanta Highway area. “Of course it’s hurt the bookstores,” he says. “Amazon affects a lot of stores—you can buy most anything on Amazon—but especially electronics.”