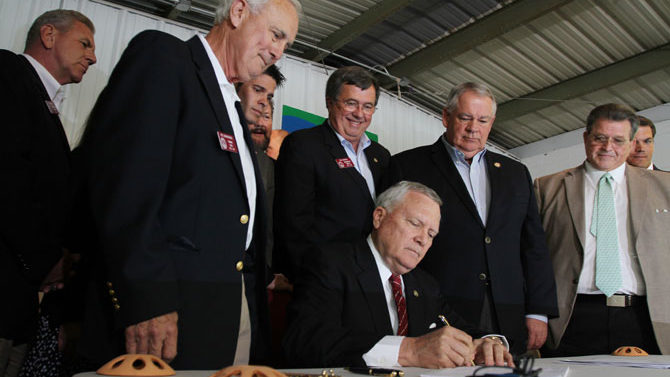 A new state law dubbed “Guns Everywhere” by critics takes effect July 1, raising the question: Where can you take a shot without worrying about getting shot?

One of the law’s many effects is to allow people to carry guns into bars unless bars specifically ban them. Flagpole attempted to contact as many local bars as possible. While they didn’t all respond, most who did said they will, in fact, post signs barring guns from their establishments, or were at least considering it. The law has outraged some bar owners in Athens, such as Wilmot Greene, who owns the Georgia Theatre and Green Room.

“We absolutely do not allow weapons of any kind inside the theater, and it astonishes me that I have to post a sign saying that they are banned from the building,” Greene said. “We have a big room with loudspeakers and blinking lights. People dance and drink and flirt with each other all the time here. Adding guns or knifes to that environment is a bad idea.”

Just last month, Atlanta resident Corey Antwan Blount, according to Athens-Clarke County police, shot two men in the parking leg of Bootlegger’s, a nightclub on Commerce Road, killing one of them. (Blount, as a convicted felon, is not eligible for a concealed carry permit, so he would not have been allowed to have a gun at Bootlegger’s even under the new law.)

“You’re begging for trouble” mixing guns with alcohol-fueled impaired judgement, Magnolia’s and Paulie’s owner Paul DeGeorge, a self-described gun owner and Second Amendment supporter, told Flagpole last year. “It’s a bad environment to have access to something like that. There’s too many brawls.” 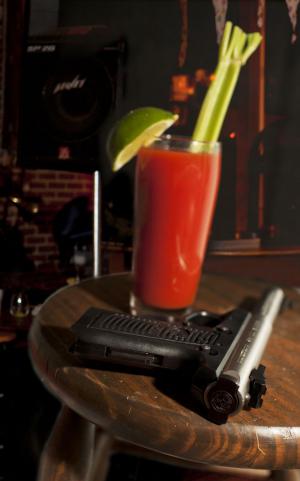 In spite of the volatile mix of bullets and Bulleit bourbon, police do not believe the law will lead to more shootings. “We are not anticipating increased violence downtown,” ACC Police Chief Jack Lumpkin said.

Supporters of the law say that it gives law-abiding citizens who’ve undergone background checks for concealed carry permits the opportunity to defend themselves against lawbreakers with illegally obtained guns. “This law gives added protections to those who have played by the rules—and who can protect themselves and others from those who don’t play by the rules,” Gov. Nathan Deal said when he signed House Bill 60 on Apr. 23.

Bills to legalize guns in bars—and churches and on college campuses—were introduced in the state legislature last year in response to massacres in Aurora, CO, and Newtown, CT. Pushed by influential gun-rights groups like the National Rifle Association and GeorgiaCarry, the measures stalled out on the last day of the 2013 session, but a modified version passed easily last spring during the 2014 session. Even the Democratic nominee for governor, state Sen. Jason Carter of Decatur, voted for it, explaining that he thinks it’s a local-control issue (and perhaps attempting to keep the NRA off his back this fall in the process).

“Our nation’s founders put the right to bear arms on par with freedom of speech and freedom of religion,” Deal said. “Georgians cherish their Second Amendment rights, and this law embodies those values.” The NRA called it “the most comprehensive pro-gun legislation in state history.”

Previously, state law banned guns in bars and churches. The new law puts bars on the same footing as restaurants and other privately owned businesses—property owners can choose to allow or not allow guns, at their discretion.

Topper’s International Showbar has already posted a sign saying guns are not allowed, manager John Young said. Other bars, including Roadhouse and Nowhere Bar, plan to follow suit. “We’re going to have a sign out front that says ‘No firearms allowed,’ and as far as I know, we reserve the right to refuse anybody to come in here,” Nowhere Bar manager John Pierce said. “So we’re not gonna allow guns in here.”

9d’s owner Mark Bell called the law “irresponsible,” but he plans to use a little reverse psychology and not post a sign, fearing that it would encourage folks like the Texas gun enthusiasts who recently made headlines by carrying assault rifles into places like Chili’s and Chipotle. “You know how some people are smartasses,” Bell said. “They’ll say, ‘Well, don’t do it? I’m going to do it.’ But as far as I’m concerned, mixing guns and alcohol is a bad idea, unless you’re the ATF,” the Bureau of Alcohol, Tobacco, Firearms and Explosives.

Terri Silva, co-owner of Manhattan Café, Little Kings and Hi-Lo Lounge, also said signs won’t be posted outside those bars for fear of encouraging people to challenge the no-guns policy. If staff spotted someone with a gun who appeared inebriated, he’d be asked to leave for drinking too much, though, she said. But Silva didn’t think it would be a problem—her clientele doesn’t seem like the type to want to carry firearms, she said.

Some bar owners said they haven’t decided what they will do. Asked if the West Washington Street bar Max would post a sign, co-owner Shannon Lazenby said, “We could… I mean, we don’t really want to invite anyone in there with it. It’s just not something I’ve discussed with anyone else, yet. It hasn’t really come up, yet.”

Other bar owners expressed confusion or uncertainty about what the new law says. “I feel like I don’t really know enough” about the law, Speakeasy owner Patrick Anderson said. “I’ve also heard, say we were to post ‘No guns allowed,’ the burden would be on us to refuse someone service or ask them to leave if they were to carry a gun… and then if they did not comply with us, they could face legal consequences. If that’s true, I don’t like that it puts the burden upon the business. It makes it tricky for the business.

“I wonder what General’s is going to say?” Anderson added.

No one at General Beauregard’s could be reached for comment, but outside the Southern-themed bar one recent Friday night, Lauren Taylor was having a conversation about guns with her friends. Taylor said she owns a pink Smith & Wesson that her grandfather, who fought in Vietnam, taught her how to use. Nevertheless, “alcohol and guns do not mix, regardless of the Second Amendment,” she said.

Other bar patrons agreed. “The two things”—guns and bars—”don’t go well together,” said Anthony Pickett, a University of Georgia law student, while drinking at Blue Sky. “You can’t use a firearm with alcohol.”

But you can carry one in libraries, many other government buildings and parts of airports starting July 1.

“Among its many extreme provisions, [HB 60] allows guns in TSA lines at the country’s busiest airport, forces community school boards into bitter, divisive debates about whether they should allow guns in their children’s classrooms and broadens the conceal carry eligibility to people who have previously committed crimes with guns,” Pia Carusone, senior adviser at Americans for Responsible Solutions, told CNN. That’s the gun control group former congresswoman Gabby Giffords and husband Mark Kelly founded after a mentally ill constituent shot her in the head three years ago.

A number of regional and local religious groups—including the Roman Catholic Archdiocese of Atlanta, the Episcopal Diocese of Atlanta, the North Georgia Conference of the United Methodist Church, the Presbytery of Greater Atlanta and the Unitarian-Universalist Fellowship of Athens—have banned guns in member churches. The Southern Baptist Convention favored the law, although the decision is up to each individual congregation.

Libraries will have to allow guns unless they hire guards and buy metal detectors to screen anyone who enters. The Athens-Clarke County Library is seeking to have libraries exempted from the law. “The library board wrote to our legislators asking that they consider having public libraries added to the school zone definition because we serve so many children,” Executive Director Kathryn Ames said. “Other libraries in the state have asked for the same thing. I hope they will push it after the elections and during the legislative session.”

It’s the same with other government buildings like City Hall—guns are allowed unless tight security is provided. ACC Attorney Bill Berryman said he is drafting a memo to the mayor and commission detailing their options under the new law.

Local school boards can vote to arm employees under the new law, but Clarke County School District officials said they have no intention of doing so.

As for college campuses like the University of Georgia, a provision in the original bill that would have lifted the ban on guns was removed due to opposition from administrators, as was another provision that would have reduced the penalty to a mere $100 fine.

The law does, however, allow hunters to use silencers with property owners’ permission; lets permit holders whose licenses are revoked apply for another one after three years; restricts access to guns for people whom a court has deemed mentally ill, incompetent or insane; and forbids police officers from asking to see a gun permit unless someone is committing a crime.