Mourning a Mural and Keeping Up With the Commission 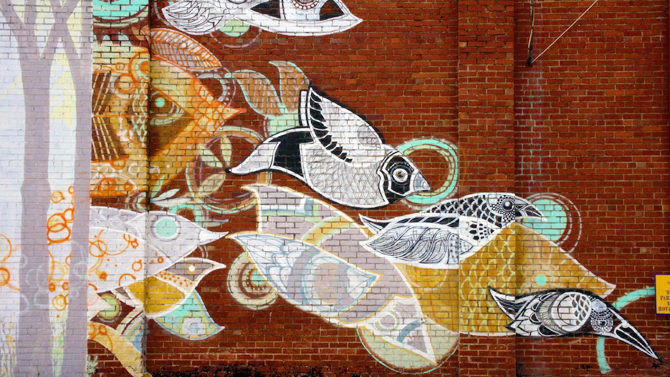 The colorful mural that once covered an exterior wall of what used to be Sunshine Cycles is gone, and people are pretty upset about it—but not the artist himself. David Hale, who is most known for his intricate tattoo work, was commissioned by the owners of Sunshine about six years ago to do the mural.

Sunshine Cycles moved to Baxter Street in April, and a Christian-based retail store called Philanthropy, out of Franklin, TN, is taking its place. Philanthropy donates 10 percent of all sales to designated causes like Lambscroft, Hands and Feet in Haiti and Village of Hope in Uganda. Hale, who does a lot of charity work himself, said, “It’s a business I would be likely to do a mural for anyway.”

According to property owner Corky Sams, no one in the family could remember which tenant had commissioned the mural, and he wasn’t sure who the artist was, so Hale was not contacted prior to the removal of the painting. Sams also said the Philanthropy owners have been hoping to replace the mural, since they realized it needed to go at the early stages of planning the building. The owners are in contact with Hale about doing a new mural, and he’s looking forward to creating something better. “I was kind of relieved,” Hale said. “I’ve always thought I could do that mural better now.”

Sams also said the Philanthropy owners didn’t have anything to do with the decision to remove the mural; that was a call he made entirely on his own.

“The city will fine landlords if you don’t paint over graffiti,” he said. “So, we have to cover it up when it happens on our building. That had partially damaged [the mural]. It was faded; it was flaking off. We were also doing some masonry work on the building, and it was right in the middle of where the repairs had to be done. So, unfortunately, it was just going to have to be removed. It had lived its life cycle, I guess. It’s time for a new one.”

Hale, unsure why people are this upset about the mural’s removal, blames the heat and humidity. “What’s weird about it is that nobody ever told me they liked it that much while it was there,” he said. [Stephanie Talmadge]

Downtown Hyatt: Robert Small, the lead developer behind the proposed Hyatt Place adjacent to the Classic Center, told me last week that he still intends on moving forward with the 188-room hotel—which he said is sorely needed—even though the Industrial Development Authority’s voting down a $2.5 million incentives package threw up an obstacle. Small said he was unsure whether he would go back to the IDA for another shot at tax breaks.

Commission News: The Athens-Clarke County Commission gave final approval Tuesday, July 2, to an Athens Downtown Development Authority plan to replace those infuriating pay-and-display meters on Broad and Clayton streets with new single-space meters that take credit cards as well as coins and allow drivers to pay with their phones, which is a nifty feature. The pay-and-display meters will be moved to ADDA-owned parking lots. The new meters will cost $98,000 to install but are expected to increase revenue by $32,000 per year. The commission also approved:

• $1.9 million for a pair of five-foot-wide bike lanes on College Station Road between Research Drive and Barnett Shoals Road.

• a $2 million construction contract to widen Mitchell Bridge Road to three lanes near Atlanta Highway. All three of the aforementioned projects are SPLOST funded.

• a rezoning for the Athens Land Trust’s six-acre farm on Ruth Street. The land, purchased by the land trust last year, historically has been a working farm but, until last week, was zoned residential. The land trust plans to use the farm for educational purposes, grow food to sell at its West Broad Street farmers market and host events like farm-to-table dinners there.

But the commission tabled a project concept for another SPLOST project—$920,000 earmarked for energy efficiency—due to citizens’ and the SPLOST Oversight Committee’s concerns that the concept was too vague because it didn’t list any specific uses for the money.

In addition, Mayor Nancy Denson announced that she has appointed former challenger Tim Denson to the Vision Committee, a group that recommends how to spend federal pass-through grants for affordable housing, social services and infrastructure in low-income neighborhoods. This will help him get the government experience critics said he lacked. Classy move on the mayor’s part.

La Puerta del Sol: Ordinarily, Hillary Brown handles the restaurant news. I can’t help but mention La Puerta del Sol, Bruno Rubio’s new Eastside joint, which—and this sounds even more insane now than it did in 2006—remains one of the most divisive local issues I’ve ever covered in nine years reporting in Athens, second only to feral cats. (It’s weird what we get worked up about.)

This was back in the days of seven-hour commission meetings, when it seemed like everybody in town lined up at the podium on drama-filled first Tuesdays; not like these 45-minute meetings we have now, where anything potentially controversial is kept off the agenda, and what’s left is hashed out beforehand.

Anyway, it will be interesting to see how many high school kids are run over on Cedar Shoals Drive while trying to get to La Puerta del Sol to buy beer underage and keep the neighbors up all night partying with Mexican gangbangers—which is what opponents claimed would happen. Or maybe it’ll just be, y’know, a good restaurant in a neighborhood that lacks many dining options. We’ll see.

Friendly Reminder: Early voting for the runoffs is underway from 8 a.m.–5 p.m. weekdays through Friday, July 18 at the ACC Board of Elections, 155 E. Washington St. next door to City Hall. You can vote in the runoff even if you didn’t vote in the May primary; but if you voted in May, you have to pick the same ballot (Republican or Democrat). In District 3, both will include the nonpartisan commission race.