Road Diets: Time for Athens’ Streets to Shape Up and Slim Down 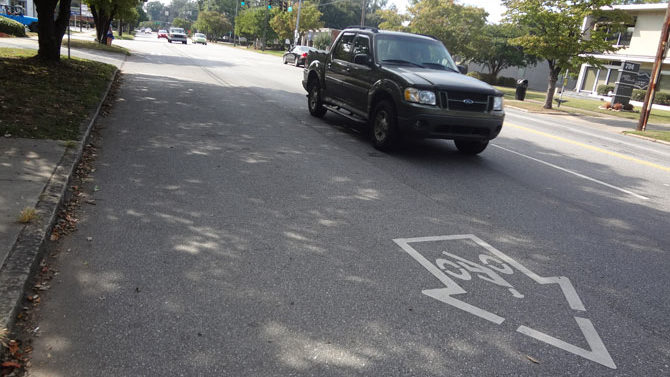 People aren’t the only ones dealing with an obesity epidemic. Our roads are fat and out of shape, too, and many state and local transportation officials and advocates think it’s time to count calories.

Across the country, governments are putting their roads on diets—taking away often-underused travel lanes for cars and devoting that space to mass transit, sidewalks or bike lanes. Athens-Clarke County’s been doing it for years, and the Georgia Department of Transportation recently became one of the last states to hop on the bandwagon. 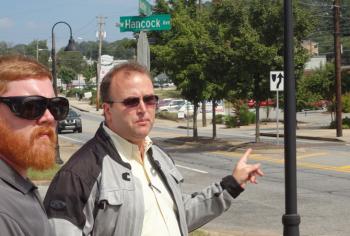 The statewide alternative transportation organization Georgia Bikes (run by Athenian Brent Buice) recently used a federal grant to bring together ACC, Atlanta, GDOT, UGA and private transportation planners and engineers to learn about road diets and how they might apply to Athens.

GDOT engineer Dan Pass told the group that he grew up walking to school in the North. Now he lives a mile from a school in Henry County, but there is no sidewalk or even a road shoulder for his child to walk on. In the 1950s and ’60s, if engineers had 40 feet of right-of-way, they simply marked off four lanes and never considered on-street parking, traffic volume or the safety aspect of a center turn lane, according to Joshuah Mello, the assistant director for transportation planning for the City of Atlanta.

“Basically, if they had room to widen it, they widened it,” he said. “Now you’re stuck with six lanes divided [highway].”

Even though comparatively few people still walk or bike compared to those who drive cars, the number is growing. As it grows, the number of people who are hurt or killed riding bikes is also growing. Data collected by the University of Georgia Traffic Research Safety Group shows that car-bike collisions and fatalities are up in recent years.

“We are definitely seeing a trend of more people dying while riding bicycles,” Buice said.

More bikes on the road could be a factor, although no one counts them the way they do cars. Cyclists don’t register like drivers do, and cars wandering into bike lanes have defeated efforts to find out how often they’re used, according to David Clark, director of ACC’s Transportation and Public Works Department.

Then there’s Athens’ incomplete infrastructure. Hancock Avenue has bike lanes, for example, but anyone riding down it must merge with cars on Broad Street (where there are no bike lanes) or cross seven lanes of traffic. Statistically, Broad Street is the most dangerous road for pedestrians in Athens, with 35 crashes, 28 injuries and one fatality from 2006-2010.

“For the first time in 20 years in Athens, I crossed that intersection on my bike and nearly had a cardiac arrest,” he said, standing at the former Broad Street Coffee near the corner. “It was very sketchy.”

Seconds later, a cyclist rolled past. “Look at this intrepid soul,” Buice said. “That makes my heart jump. But people are still doing it, because they have to get someplace.”

Data suggests that a combination of inexperienced drivers and road design contribute to wrecks. More occur during the fall than other seasons and in the afternoon or early evenings than other times of day. The most common factors are lack of visibility or glare, impaired drivers and failure to obey traffic laws. Some of those factors can be remedied by road diets.

Not the Cutting Edge

Both GDOT and Athens-Clarke County recently adopted Complete Streets policies that require officials to consider pedestrians and cyclists as well as motorists when designing road projects. Georgia was the 28th state and the eighth Southeastern state to adopt such a policy, and ACC was the ninth city in Georgia.

“This represents buy-in, not only from GDOT, but from the state of Georgia, in ensuring we consider these modes of travel,” Pass said. “I’d say if we aren’t leading the pack, it’s about time we get on board with this.”

In Atlanta’s Inman Park, Virginia Highland and Old Fourth Ward neighborhoods, the first phase of the BeltLine, a 22-mile streetcar line and multi-use path along an abandoned railroad, recently opened. “Now we have people who’ve never ridden a bike before riding up and down the BeltLine,” Mello said. “They want to get to restaurants. They want to get to their jobs in Midtown.”

One thing Atlanta transportation officials noticed was a lack of east-west connections from the north-south BeltLine to downtown and Midtown. The city is spending $47 million to narrow little-used (by cars) Edgewood Avenue from five lanes to two and add a streetcar line, wider sidewalks and a bike path separated from traffic by a buffer, which makes many cyclists feel more comfortable, Mello said.

Not every road diet is a multi-million-dollar endeavor. For just $100,000, Atlanta met a “huge demand” for east-west bike commuting by adding an improved crosswalk, sharrows (share-the-road arrows painted on roadways) and plastic curbs to protect cyclists on 10th Street hooking into the BeltLine’s Eastside Trail, Mello said.

A more ambitious project was Ponce de Leon Avenue. Its seven lanes were only about nine feet wide—unsafely narrow for cars—so the city changed the configuration to five wider lanes, along with bike lanes and back-in angled parking, which is safer because cars pull out into the road front-first.

Some commuters screamed about losing two lanes, but the general consensus was that Ponce needed better bike and pedestrian facilities, Mello said. “People are very vocal about projects like this,” he said. “If you’re not willing to go all the way and pull the trigger on it, don’t even start talking about it.”

No one knows that better than Clark. ACC has a policy pre-dating Complete Streets that requires the county commission to consider three-laning four-lane roads when they’re due for repaving, and the longtime public works director has seen fights almost every time.

Baxter Street was converted from four travel lanes to two with a center turn lane and bike lanes in 2005. Clark declared it a success (crashes are down significantly) in spite of merchants along the street nixing pedestrian refuges that would have made it safer to cross because they feared impeding cars trying to turn left into the their businesses, he said. 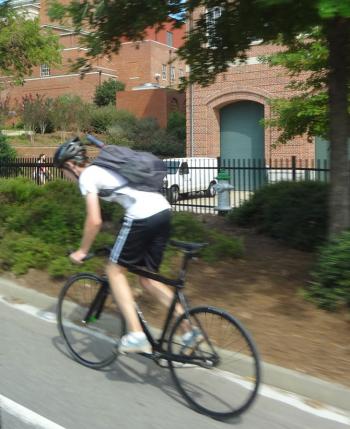 A cyclist on Lumpkin Street.

Lumpkin Street got a similar treatment around the same time, which Clarke also said was successful. About 20-30 percent of Barrow Elementary students walk or bike to school, one of the highest rates in the state, Buice said.

BikeAthens Executive Director Tyler Dewey, though, said improvements can be made. He suggested getting rid of bike lanes on downhill slopes because bikes and cars are traveling almost the same speed, and cars turning right often sideswipe bikes next to them. The extra space could be used to widen bike lanes on uphill slopes.

“It’s a situation where a lot of cyclists say, ‘Don’t take away the bike lane, it discourages riding.’ But it doesn’t do you much good if it puts you in a more dangerous position,” he said.

The tour stopped on Broad Street, which was not considered for a road diet when GDOT repaved it over the summer. Road diets aren’t a part of routine maintenance, Pass said, and requests need to come from local governments that are willing to put some skin in the game. But Clark said he didn’t even know about the repaving until just before it started.

Then it was on to Hawthorne Avenue, which Clark called a failure. But, he noted, “we were dealt a bad hand to begin with”—the road really should be five lanes, but the right-of-way is only 36 feet wide, barely enough for three without taking out power lines and businesses.

Politically, Hawthorne’s failure gave car advocates ammunition. “This road is held out as the reason why we shouldn’t do road diets,” neighborhood activist Tony Eubanks said.

The final stop was Prince Avenue, which Eubanks and others have been trying to put on a road diet for a decade. Eight years ago, commissioners voted down a three-laning plan that pitted Cobbham and Boulevard residents sick of almost getting run over against suburban commuters who feared traffic gridlock (even though a study showed three-laning would increase drive times by just a few seconds because traffic would flow more slowly but more smoothly). The commuters won.

“It’s convenience versus safety,” Buice said. “As somebody who rides a bike on Prince, your convenience is irrelevant to my safety.”

Now an effort is afoot to address transportation on Prince as part of comprehensive plan for the corridor. Mello’s advice: Emphasize safety for cars as well as bikes; studies out of New York City, Portland, OR and Montreal show that collisions decrease the more bikes are on the road, and facilities like separated bike lanes lead to more cyclists.

“The best way to improve bike safety is to get more bikes on the road,” Buice said.

And get businesses on board, too, Mello said. Another New York City study showed retail sales increased 49 percent after a separated bike path was installed on one avenue. “Ponce City Market (a two million square-foot mixed use development) was a gigantic ally for us because they wanted bike routes connecting directly to their business,” he said.