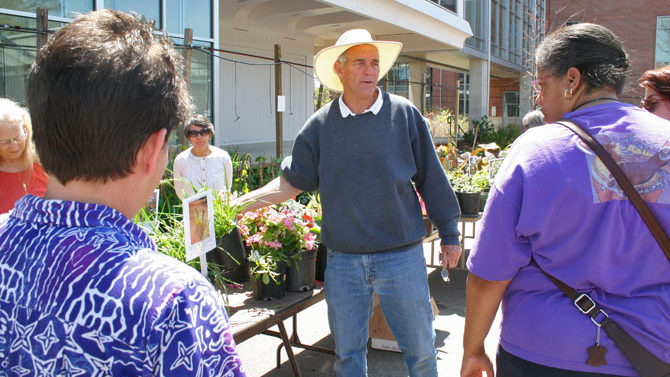 You don’t have to be a University of Georgia student to sit down with horticulture professor Allan Armitage and learn something.

Even if you’re not good with plants, that’s OK. He’s not going to make you leave with something in a little plastic pot. But guaranteed, if you hang around for even a few minutes, he’ll soon be pulling you aside to explain why a particular sweet potato vine smells so sweet or how a clump of dark green leaves will soon sprout round yellow flowers that give the “eyeball plant” its name.

It just comes naturally to Armitage, who has been teaching horticulture at UGA for 30 years and was instrumental in starting the Trial Gardens at the University of Georgia. He’s retiring this summer, after he hosts an open house at the Trial Gardens on Saturday, July 13 ($5 admission). An 11 a.m. presentation will focus on Armitage and the legacy he’s leaving at UGA.

Tucked behind several parking lots off South Lumpkin Street, the Trial Gardens hold specimens of perennial and annual plants and are tended to by the students who work there. Georgia’s extreme heat makes it a good testing ground, Armitage says, and plant growers from around the world request their plants be proven worthy in this soil before heading out to garden centers. As a result, not only are the trail gardens able to run without any financial help from the University, but they also teach horticulture students about the business of plant breeding, growing and marketing.

Some of the plants at the Trial Gardens come from breeders, while others are cultivated by the students who work there. Sometimes, all it takes is a simple cutting for a variety to establish itself as a winner in the marketplace.

While driving to Atlanta with fellow UGA horticulture professor Michael Dirr, Armitage spied a deep purple variety of verbena, a flowering plant with tiny clusters of flowers that’s prized for its drought tolerance. They pulled over and knocked on the door of the ramshackle farmhouse to ask for a closer look. The old woman who answered the door was in her housecoat, with wild white hair and a few teeth missing. But when they asked to see her garden, she smiled.

“We were all gathered around this flower bed, and I said, ‘Hey, Mike, it’s a verbena,” Armitage says. “She takes her elbow and pokes me in the rib and said, ‘That’s vervain.'”

Armitage still laughs telling the story, impressed how the woman, surrounded by two of the plant world’s most esteemed experts, was quick to correct them. And her name for the plant wasn’t incorrect—it was simply an old-world term for verbena.

Dirr and Armitage took seven cuttings from her plants, and with those cuttings they propagated thousands of the deep purple variety.

A couple years later, Armitage drove past the site where they collected that prized plant. The ramshackle house with its little garden was gone. Luckily, thanks to Armitage’s keen eye and the work done at the Trial Gardens, the plant now lives in gardens across the South.

When Armitage and his family arrived from Canada so many decades ago, he wouldn’t have believed such an undertaking was possible.

“When I came down here, I said, ‘You can’t grow anything here,'” he recalls. He and his wife, seven months pregnant for their summertime move, watched the steamy world from their air-conditioned house in disbelief. “But I did know you could grow a lantana and a magnolia here. So with this whole idea of starting a perennial garden, we said, ‘We can do better than a lantana and a magnolia.'”

Armitage ended up in Georgia thanks to a tall government building, a freighter bound for Europe and a few middle-school math classes.

Actually, Armitage began his career as a teacher at a Canadian high school. He taught math and biology, and even coached a little basketball. In the summers, he and a friend drove around in a little red pickup truck doing landscaping. “I just happened to like plants,” he said. But after seven years of teaching, and feeling a bit burnt out, Armitage made a voyage to clear his head. He hopped a freighter and crossed the ocean to Europe. When he returned, he decided to head back to school, working as a gravedigger to pay the bills.

“When we put the dirt on, we planted the dirt; we made designs in plants,” he says. “The first clue that maybe this horticulture thing might be a thing, I had finished and the family came. And they were sobbing—not only because of their grief, but also because of the beauty of the plants.

Armitage eventually passed on a job offer to manage flowers for the Canadian prime minister—a job that would put him in a dress shirt and tie on the 19th floor of an Ottawa office building—and, after getting his PhD, landed at UGA.

Today, Armitage has written 13 books and spends some of his time organizing group trips to the great gardens of the world. If you think you’ll miss his colorful plant descriptions given by microphone at the annual spring plant sale at the Trial Gardens, you can download his new app, “Armitage’s Greatest Perennials and Annuals,” ($4.99, iTunes store) and take his advice to go.

Although, he admits with a shrug, just because he’ll no longer be teaching doesn’t mean he won’t still occasionally hang out at the Trial Gardens.

“I’m retiring from the garden—the day-to-day and teaching” he says. “But I got more books to write and things to do. I’m going to miss the teaching. but I’m always going to be teaching somebody something.”