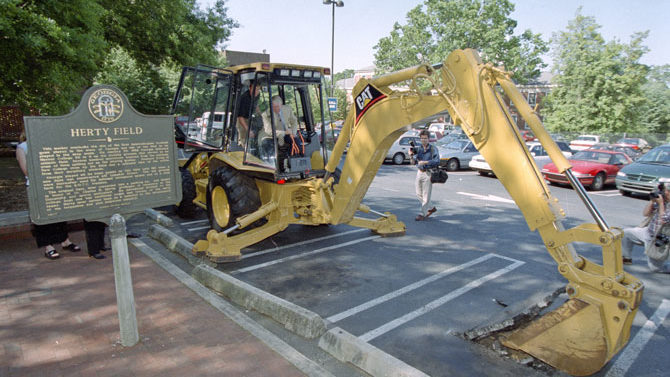 Heidi Davison had just become mayor in 2003 when the University of Georgia’s then-Athletic Director, Vince Dooley, had to bring by some documents. The Athletic Association needed her to sign off on $8 million in bonds to add 27 new suites to Sanford Stadium.

Conflicts like that lie at the heart of town-gown relations under UGA President Michael Adams, who is stepping down after 17 years at the end of the month. The university is Athens’ largest employer; faculty, staff, students and football fans pump $2.1 billion a year into the local economy, according to a 2011 Terry College of Business study. The dozens of campus facilities built or renovated under Adams have helped launch UGA into the upper echelon of public universities. The growth has benefited Athens, but not without the occasional price—cramped parking in residential neighborhoods, raucous fraternities pushed out into communities and threats to beloved institutions like Legion Pool, to name a few examples.

The unprecedented period of expansion started when former President Charles Knapp initiated a master planning process in 1996, but it didn’t really take off until the Board of Regents hired Adams in 1997.

The plan, adopted in 1998, called for building and updating residence halls, adding more than a million square feet of classroom space and making the campus more walkable by building parking decks on the outskirts and turning acres of surface lots into greenspace. All in all, the campus has seen $1.3 billion worth of construction during Adams’ tenure. 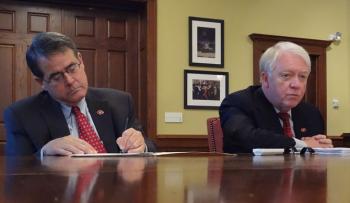 One of the first priorities was erecting new science buildings to relieve overcrowding and take advantage of grant money available for research. Most of those—the Animal Health Research Center, the Edgar L. Rhodes Animal Dairy Sciences Complex, the Paul D. Coverdell Center for Biomedical and Health Sciences and the Complex Carbohydrate Research Center and the Veterinary Learning Center that’s under construction—went on South Campus.

There was one major exception: the Health Sciences Campus on Prince Avenue. After the federal Base Realignment and Closure Commission moved the Navy Supply Corps School to Rhode Island in 2005, Davison appointed a committee to find a new use that then, in turn, handed it over to the university. While some people at the time worried about the new campus worsening traffic and driving multifamily development, it’s worked out well, according to Dan Lorentz, president of the Historic Boulevard Neighborhood Association.

“The fact that the old fences that used to surround the Navy school are coming down, in many places at least, is helping to make the campus feel accessible again, part of the neighborhood,” he says. “There’s still some rediscovery of the campus that has to take place before it really feels like it’s integrated into the whole fabric of the neighborhood, but I think that’s going to happen.”

But the new campus “contributed to a sense of urgency to get Prince Avenue right,” Lorentz says meaning thoughtful zoning that protects neighborhoods and encourages mixed use development and safer pedestrian crossings.

One of Adams’s decisions that didn’t go over so well was to push fraternities off Lumpkin Street to make way for new academic buildings. They were offered land in a new “Greek Park” on River Road on East Campus, but several turned it down.

Kappa Alpha—a fraternity known for its Old South imagery that, until a few years ago, even paraded on horseback in Confederate uniforms—took nearly everyone by surprise when they announced plans in 2006 to build their new house on Hancock Avenue in a primarily African-American neighborhood.

“The blood begins to boil,” resident Bertha Troutman-Rambeau said at the time. “You have to know the history. They believe the South will rise again. It will not.”

The KAs snuck in their plans under the gun hours before the Athens-Clarke Commission was set to declare a moratorium on Greek houses off campus. The brouhaha led to a new law requiring commission approval for new fraternity and sorority houses.

The nearby Cobbham neighborhood has been affected as well. Sigma Nu and Sigma Chi both tried to buy property in the neighborhood but abandoned their plans in the face of residents’ opposition.

And in Five Points, residents opposed Chi Phi’s plans to buy the Arnocroft House on South Milledge Avenue and build a new chapter house next door, but the commission approved it anyway in 2010.

Administrators were caught off guard by the fraternity issue, Sniff says. They expected the Greeks to either move to River Road or to South Milledge Avenue, where there were already a number of Greek organizations.

“You never really fully can gauge how the community will react, what will be a hot-button issue for them,” he says.

Another example is Legion Pool, a popular relaxation spot for faculty and their families built during the Depression. Saying that the pool was outdated and underused and the land was too valuable for such a use, UGA administrators proposed filling it in last year, turning it into greenspace and, presumably, developing it at some point.

Adams said last year that he didn’t understand the fuss about Legion Pool and was exasperated by the attention given to it, at, he thought, the expense of other issues like the shrinking state higher education budget. But he gave in.

The fraternities and Legion Pool had something else in common: Adams wanted to make a way for a new West Campus. He had already built the Zell B. Miller Learning Center and the Tate Center expansion on the east side of Lumpkin Street. On the west side, he planned the Richard B. Russell Special Collections Library (opened in 2012), a new Terry College of Business complex (ground broken in April), a new Bolton Dining Hall (scheduled to open next year) and, down the road, more dormitories and academic buildings.

Meanwhile, Adams settled on the eastern fringes of campus for all the new dorms he believed UGA needed to create a true campus feel. In the 1990s, only 17 percent of students lived on campus; that number has since more than doubled, thanks to East Campus Village and East Campus Residence Hall. But administrators felt that East Campus lacked an academic component, so they put a host of new and expanded arts facilities there, including the Lamar Dodd School of Art, the Georgia Museum of Art and the Performance Arts Center.

The latter two were renovated, and so were many other buildings on campus, mainly on historic North Campus. Old College, New College, the Administrative Building, Demosthenian Hall, Moore Hall, Meigs Hall, Reed Hall, the Visual Arts Building, the Fanning Building and Memorial Hall all got facelifts.

“The 11 years I’ve been here, I’d say overall, the university’s record on historic preservation is quite good,” she says. “There are exceptions,” such as Rutherford and the red barn that UGA moved to make way for athletic fields and is now allowing to collapse.

And don’t forget those all-important athletics (which, after presiding over record sports spending, Adams advised the next president to reign in). In addition to the Sanford expansion, Adams renovated Stegeman Coliseum, built a new basketball training facility next door, expanded the intramural fields and the practice facilities at Butts-Mehre Athletics Heritage Hall, and built the Dan Magill Tennis Center and a plaza honoring his old nemesis, Dooley, whom he infamously forced into retirement in 2004. That incident, maybe the ugliest of Adams’ career, led to a revolt by key donors who split off to form a new fundraising foundation (as detailed in Rich Whitt’s Behind the Hedges) and sportswriters excoriating him as imperious and hot-tempered.

Adams has discussed his legacy with reporters several times as his tenure has drawn to a close, and he takes pride in all these new facilities and the programs they house. His views on the university’s relationship with the city, though, are more mixed. This is how he described it in his final State of the University address:

“While the Athens community and the university have worked together on many laudable efforts—a new fire station, a new water treatment facility, the Oconee River Greenway, Athens Transit, fine and performing arts presentations and a generally tolerant, even accepting spirit that makes Athens a wonderful home for a wonderful university—there are some issues to be resolved,” he said. 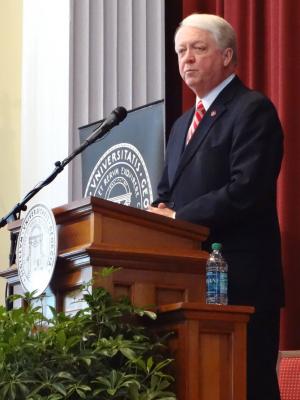 Michael Adams gives his last State of the University Address at the Chapel in January.

“Some have forgotten that the University of Georgia is a charity, not a donor. This is a nonprofit educational institution, supported by the state and a number of external partners. And while we have supported financially many mutually beneficial projects and programs initiated by the local government, our resources have been more limited in the past three years than at any other period in my 16 years here.

“The old and oft-repeated saws about how much land UGA owns and how much UGA doesn’t pay in taxes are not only short-sighted, they are potentially harmful to our state support base. They contribute to a negative feeling in Atlanta, not widely shared by our funding partners, who still believe that sending some $400 million of taxpayer money every year to Athens is a pretty strong level of commitment.”

Adams declined to elaborate, but Davison chalked up those comments to temporary frustration.

“I think there were a lot of events close together that drew attention from the public, and none of it was positive,” she says.

After traveling for a while with his wife, Mary, Adams will settle into his new president emeritus’ office in the main library, gazing out upon his creations, writing, making lesson plans for the political science class he plans to teach and drawing his $2.7 million retirement package. His provost, Jere Morehead, will have taken over by then.

Morehead has declined to comment on anything until he takes over July 1, and Sniff says he isn’t sure how Morehead will want to proceed with the master plan. Tight budgets and sustainability concerns, though, are likely to mean an even greater focus on renovations, rather than new construction, especially for the 1960s-era modernist buildings on South Campus.

“There’s a greater appreciation now for those types of buildings,” Sniff says. “Now you have to decide which ones are dogs and which ones are keepers.”

Kissane hopes that Morehead will pursue a historic preservation plan—something required by law but that Adams always dismissed. Such a plan could head off controversies like those over Legion Pool and Rutherford Hall.

“It would have been clear to the community what buildings needed to be preserved and protected and which ones they felt needed to go,” Kissane says. “They could see why we need to expand and why this is the only place we can do it. In the long run, you save yourself a lot of pain and heartache.”