Don’t Stop Conserving, Even Though the Drought Is Over 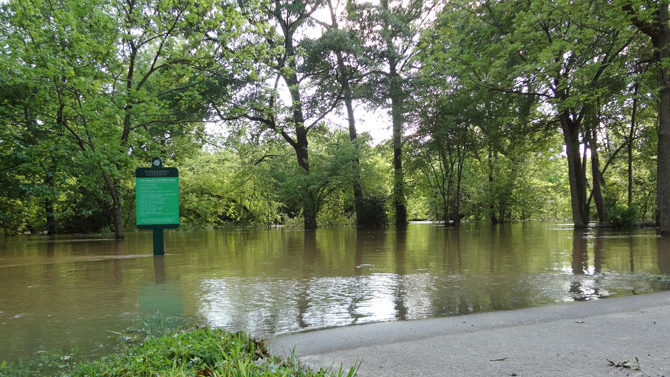 For four out of the past six years, Athens and much of Georgia have been mired in drought.

At one point in late 2007, it got so bad that Athens-Clarke County officials considered importing bottled water and tapping Lake Chapman in Sandy Creek Park, because the city only had six weeks’ worth of drinking water left.

“If it’s yellow, let it mellow” became Athenians’ motto. People wouldn’t flush a toilet, let alone wash a car or sprinkle a lawn. Not even former Gov. Sonny Perdue’s prayers would open up the skies.

Heavy rainfall this year—including a record nine inches in February—has refilled rivers, aquifers and reservoirs and recharged the soil.

“I think the last six months, we’ve been back to normal, but it takes a while for those things to recover,” Athens-Clarke County Water Conservation Coordinator Marilyn Hall says.

Drought is lingering only in a small slice of the Georgia coast near Brunswick, according to University of Georgia climatologist Pam Knox. “After this week, after all the rain we’ve gotten since January, the whole state will be drought-free,” Knox says

Effective May 1, Mayor Nancy Denson eased outdoor watering restrictions for the first time in two years, and the restrictions could go away entirely within the next month or two.

Athens’ water conservation efforts have been highly effective. Residents and businesses are using an average of 11 million gallons of water per day this month. Last summer—the season when there’s the least rainfall, evaporation is highest and people use the most water—the average daily use was 14 million gallons, dow

Part of that drop is due to more awareness of water issues stemming from the crisis six years ago. “We used to think of water as an unlimited resource,” Denson says. “I think citizens and government alike are thinking about it differently now.”

And even though the drought is all but over, Athens residents continue to conserve, Hall says. Interest is still high in events like Roll Out the Barrels, an auction of artist-decorated rain barrels to benefit environment education Friday, May 17 at 5:30 p.m. at the Lyndon House Arts Center. “If anything, it’s increased,” Hall says. “I think our last drip-irrigation class was full. We had a waiting list. People are ready to be ready for the next drought.”

There’s no telling when that next drought might come, but “I don’t see us going back into a drought anytime soon,” Knox says.

Weather patterns have been moving north-south, rather than east-west like they usually do, which accounts for all the recent rain, as well as the wild temperature swings, she says. The rain was enough to drench the soil so that Georgia can withstand a dry period. “It’s like a bank account,” she says. “Even if we go through a dry period, you have something to build on.”

Summer rains in Georgia mainly depend on whether any tropical storms drift over the state. Experts are predicting an active hurricane season, but more of the storms are expected to hit the East Coast, not the Gulf Coast, she says. An El Niño weather pattern hasn’t developed off South America’s Pacific coast—which means more tropical storms in North America—but if one does, the warmer water will mean fewer tropical storms. However, such predictions are iffy, she says.

The uncertainty is one reason why Chris Manganiello, policy director at the Athens-based Georgia River Network, questions the decision to lift outdoor water restrictions. He agrees that bodies of water like the North and Middle Oconee rivers (Athens’ main water sources) and Bear Creek Reservoir in Jackson County (our source when the rivers get too low) are “in pretty good shape.” In fact, the North Oconee flooded last week, as anyone who tried to go on the greenway can attest to.

“I can’t remember when the North Oconee and Trail Creek almost jumped their banks, but of course it’s not going to rain forever,” Manganiello says.

Changing the outdoor watering rules could get people out of the habit of conserving, he says. “What makes me nervous is people have gotten used to these restrictions,” he says. “Do we really want to tweak them, particularly if we have to change them back?”

Old habits die hard, though. Denson says she hasn’t turned on a hose outside since her husband died. “When Bob was alive, we had huge water bills,” she says. “I haven’t watered the yard in seven years. It’s still green. It’s not dead.”

Athens’ tiered pricing system is still in place, which should  tamp down on excess water use. The system, instituted in 2008, during a previous drought, set a baseline for households’ water usage, then charges extra for using more. “I’ve strayed out of that base rate a couple times, and it’s made me think hard about how I’m using that water,” Manganiello says.

Denson says she receives weekly reports on local stream flows, reservoir level and soil moisture. The Upper Oconee Basin Water Authority—a partnership among Athens-Clarke, Barrow, Jackson and Oconee counties to run Bear Creek Reservoir—meets monthly to discuss outdoor watering restrictions and other issues. Any restrictions in effect in Athens are in effect in the other four counties, as well.

“We’ll be keeping a close eye on it, but unless weather patterns change drastically, we should be fine through this summer season,” Denson says.