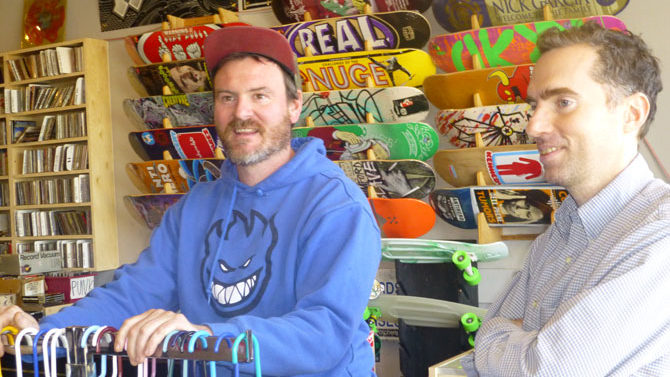 Low Yo Yo Stuff Records doesn’t look quite the same inside anymore. Though they were already able to fit an impressive cache of records, tapes, CDs and other media into a small space, the record store’s employees have managed to clear room in the front for a new breed of cool stuff—decks, trucks, wheels, bearings and other paraphernalia belonging to their new roommate, Get Rad skateboard shop.

Though he initially kept the planned move quiet, Get Rad owner Chris Bradley began moving in with Low Yo Yo on Washington Street in March, much to the delight of skaters who remember the store Amped, which was once housed in the same building.

Bradley first opened Get Rad in 2011 in his native Gainesville, which has its own small skate community. A musician and former welder, Bradley had never owned a business before, but he was excited to turn his passion for skating into his livelihood.

Unfortunately, the original shop’s proximity to the Mall of Georgia and the surrounding chain stores made it vulnerable to corporate competition, and it didn’t thrive as Bradley had hoped. He decided to move to Athens, with its active skate scene and ethos of supporting small businesses. He’d been coming to Athens to skate since high school and had lived here for several years in the early 2000s.

The store’s first Athens location was on the Eastside near the skate park, but when Bradley had the chance to move downtown last summer he jumped for it, moving into the space near the corner of Hancock and Hull Street, where Gig Worn had been.

Then, one day when he was in Low Yo Yo Stuff browsing the cassettes, one of the record store’s owners suggested the possibility of sharing a space. “Something just told me to go for it, because I knew that this was the best location possible,” Bradley says. 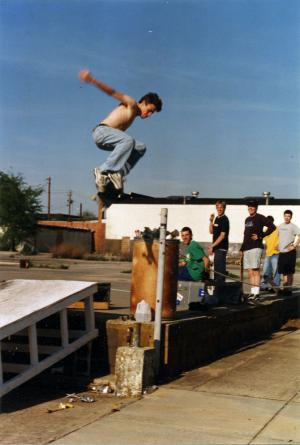 The DIY skate park flourished where the Chastain Building and the Chamber of Commerce Building now stand next to Ciné.

Get Rad is the latest in a series of shops that have supported the evolving local skate scene—previous incarnations have included Moonlight, Amped, Ray Gun, Pie, Low J’s, Feral and Skate Shop of Athens. But none of the stores was able to stay open more than a few years. For several years after Amped closed, Sunshine Cycles sold skateboards and gear. Owner Jimmy Marbut is a skater himself and was happy to fill the need, though he phased them out around the time Bradley returned to Athens.

“There’s always been one of us who has kind of stepped up,” Marbut says. “Skate shops are really hard businesses. The margins are really bad, and the mail order is so competitive.”

But local skaters agree that a good shop in town is a necessity. “Who wants to buy stuff online when you could fit it and ride out of the store?” says Sonni Brickhouse. “For people to skate, there needs to be a skate shop.”

Frequent turnover in stores “hasn’t really helped build the scene,” Bradley says. “Back when Amped was here, there was a scene that went along with it. I’m working to rebuild that. I want to actually create a scene that goes along with it, other than just random kids skateboarding here and there.”

Many skaters fondly remember the unofficial skate park on the corner of Hancock and Pulaski, where the Chamber of Commerce and the Chastain building now stand. For several years, beginning in the mid-‘90s, there were two abandoned foundation lots on the property, and the city had a tacit agreement with the skaters that as long as they kept the spot clean and safe they could build ramps to their hearts’ content.

“It was a legit, home-brewed skate park,” says Marbut. “It was a really thriving scene for years and years, because it was a great downtown centrally located place for all the skaters to congregate. You knew you could skate for free; there were going to be fun ramps that were always being changed, and people were always bringing new ramps in… It was this evolving, always changing skate spot. Really cool.”

In 2005, the Skate Park of Athens opened at Southeast Clarke Park after much advocacy and input from local skaters, with momentum built from the loss of the downtown spot when new construction began. One of the best in the region, it draws skaters from all over Georgia. According to older skaters, the park is so challenging that Athens kids who learned to skate there are already quite advanced. A few even seem poised for skating careers, including Kaden Campbell, a local teen who has already won some major competitions in the Southeast. “He will be the first pro out of Athens,” Thrasher says.

Thrasher, Bradley and others have been active in raising money for Phase Two of the park. Last year’s “Endless Summer of SPOA” fundraisers were a success, and other efforts continue. Jittery Joe’s designed a special coffee can for Get Rad, and profits from the coffee sold benefit SPOA. Get Rad also sells shirts designed for the cause. More events are in the works.

Even though skating isn’t allowed downtown anymore, it’s still the right location for a shop. “The downtown scene is going to draw people,” Marbut says. “Somebody like Chris has the potential to sell a lot of stuff to non-skaters. Amped did so well downtown because they sold tons of stuff to college kids who weren’t skaters at all.”

Bradley has enjoyed doing business in the new spot, and operating out of the record store has given him a chance to discover new music. “I’ve only scratched the surface,” he says. “I’m like a kid in a candy store.”

While Bradley works to get his stuff set up, Low Yo Yo employee Spencer Rich works on thinning some of the record store’s stock and finding homes for the crates of records that line the floor. Music and skating seem to be a natural partnership, and Bradley has already seen his friends and customers checking out the records.

“My friend was in here, and he was like, ‘You’ve opened my eyes up to a whole new world,’” Bradley says. For his part, Rich says that even though he hasn’t skateboarded in years, he’s starting to want to again.