Believe it or not, Bethel Midtown Village was once the nicest place an African-American could live in Athens.

Under the federal Urban Renewal program in the late 1960s, a working-class black neighborhood of shotgun houses called The Bottom was torn down to make way for modern housing. Bethel had air conditioning and indoor plumbing—amenities most housing available to African-Americans during segregation lacked.

Like many low-income housing projects of that era, it went downhill. In 2009, the Athens Banner-Herald called Bethel the most dangerous neighborhood in Athens. The investigation led residents and community leaders to come together to try to improve life at the low-income apartment complex. 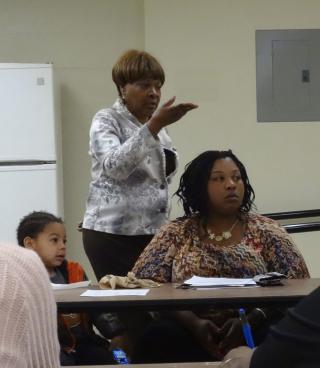 But last year, the effort flagged. As Ovita Thornton, CCSD board member and director of the nonprofit Georgia Clients Council, put it: “We did take a gap. You burn out; you get back on it. That’s where we are now.”

And so, four years after residents, pastors, social workers, police and school officials first gathered in the basement that serves as Bethel’s community center, many of the same people—plus some newcomers—found themselves in the same room saying many of the same things.

Thornton and Tim Johnson, executive director of the nonprofit Family Connection/Communities in Schools, called a meeting last week to get back on track. What do residents need, they asked, to lift themselves and their children out of poverty?

The top priority, neighborhood association president Marissa Joyner said, is “to provide a safe environment for our children.” That’s been accomplished, at least to a certain extent. According to police, crime is down at Bethel, and it’s stayed out of the blotter lately. “Praise the Lord for the way it’s coming along,” said James Lawson, pastor of Greater Bethel AME Church.

Then, residents—mostly single mothers and their children—need help to get jobs or better jobs and move to better quarters. “Don’t nobody want to stay here the rest of our lives,” Joyner said. “Get some skills and resources so each one can move on.”

Bethel is not run by the Athens Housing Authority, which has a waiting list and requires strict background checks to weed out criminals. But meeting attendees said H.R. Russell does have a partnership with AHA to provide a summer camp.

According to AHA spokeswoman Marilyn Appleby: “The AHA does not run a summer camp at BMV.   We do run the Summer Food Service program in A-CC and deliver to Bethel. The lunchtime at Bethel is whatever the management/residents and/or faith community design it to be. In the past, a residents have gotten together to set up a central meeting place offered by management for lunch to be delivered and served. If the residents running the program offer activities or have an outside group come in to do so (sometimes in the past a local church has been involved), then that’s who runs the summer camp. Bethel is just one of about 25 sites that we deliver the Summer Food Service Program lunches to around the community.”

The school district remains engaged, too. When redistricting moved about 90 Bethel children to Barrow Elementary School, other parents feared they would bring down test scores and Barrow wouldn’t make adequate yearly progress under No Child Left Behind, Thornton said. That didn’t come to pass—test scores actually rose, Johnson said.

Other programs, though, fell by the wayside. Three residents got their GEDs at Bethel, Thornton said, but then the classes moved to the nearby Athens Latino Center for Education and Services (which has since moved to Jefferson Road). Classes are still available at the H.T. Edwards school complex in Rocksprings and Athens Tech, but for many Bethel residents, transportation is an issue because they don’t have cars and can’t afford bus passes.

Residents don’t always take advantage of what programs are available on-site, either. For example, Barrow Elementary provides meals and transportation for struggling students to be tutored on weekends, principal Ellen Sabatini said. “We’re not getting kids on the bus on Saturdays,” she said.

Simply publicizing services would go a long way, Thornton said. “I don’t know if we should put up a kiosk with blinking lights like you’re going to the movies,” she said.

The neighborhood association will start meeting regularly again, according to Joyner, who wants to start a newsletter to keep other residents apprised of its actions.

Other ideas were kicked around. Linda Lloyd, president of the Economic Justice Coalition, mentioned the EJC’s worker-owned landscaping and housecleaning business. Thornton mentioned financial literacy programs to help people get tax refunds and save money. There was talk of a Facebook page, a substance abuse program, groups to deal with depression and training building captains.

School and nonprofit officials plan to meet next month for more discussion. “I’m glad to see this back on the road again,” Lawson said.

This article has been updated to clarify AHA’s relationship with Bethel.