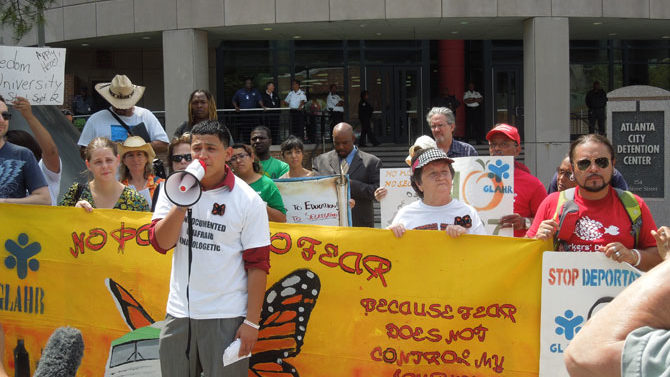 Aldo Mendoza was born in Mexico, but his home has been Athens since he was a little boy. Thanks to the Obama Administration, he and 60,000 other undocumented Georgians won’t have to leave it behind.

The U.S. Department of Homeland Security announced in June that it won’t deport an estimated 1.76 million illegal immigrants who are under age 31, came to the U.S. before they turned 16, have lived here at least five years, stay away from crime and are in school, have graduated or are in the military. The Deferred Action for Childhood Arrivals program took effect Aug. 15.

â€œI am undocumented. Iâ€™ve been here illegally under the radar for 12 yearsâ€”I came here when I was like four and a half,â€says Mendoza, a member of the Georgia Undocumented Youth Alliance and one of the founders of Ambition for Equal Rights, a student organization at Cedar Shoals High School, where he is a senior, â€œWhen I found out about [DACA], I was happy, excited, because this could be a good opportunity for other students in the same situation.â€

Mendoza, who says he doesn’t even remember Mexico, plans to apply for deferred action status. But it’s not the same as citizenship, a green card or, as critics have called it, amnesty. The policy’s purpose is “to say childhood arrivals, who are not considered a threat, are not going to be deported,” says Robin Catmur, director of UGA’s International Student, Scholar and Immigration Services. Basically, “it means their file sits on a shelf for two years.”

If an eligible undocumented person is given deferred action status, they can renew it indefinitely every two years when it expires. But there are no guarantees. â€œThe difficulty with these sorts of temporary protections is they are temporary and can be taken away,â€ Catmur says. â€œSo, it’s as if you were living your life based on what’s going to happen next. It’s a difficult way to live.â€

A Climate of Fear

Undocumented immigrants who are eligible for DACA have spent most of their lives living with uncertainty. Fear and insecurity plague the entire undocumented community, especially in recent years, when a slew of anti-immigrant legislation took effect in states across the country.

Georgia has taken some of the most extreme actions to combat illegal immigration, along with Alabama, South Carolina and, most notably, Arizona. Last May, Governor Deal signed House Bill 87, Georgiaâ€™s Arizona copycat legislation, into law. Federal courts have ruled against several key provisions of these bills while upholding others.

Just before HB 87 went into effect, a U.S. District Court judge placed an injunction on the lawâ€™s most controversial measures, saying their intent was to create â€œa climate of hostility, fear, mistrust and insecurity.â€ 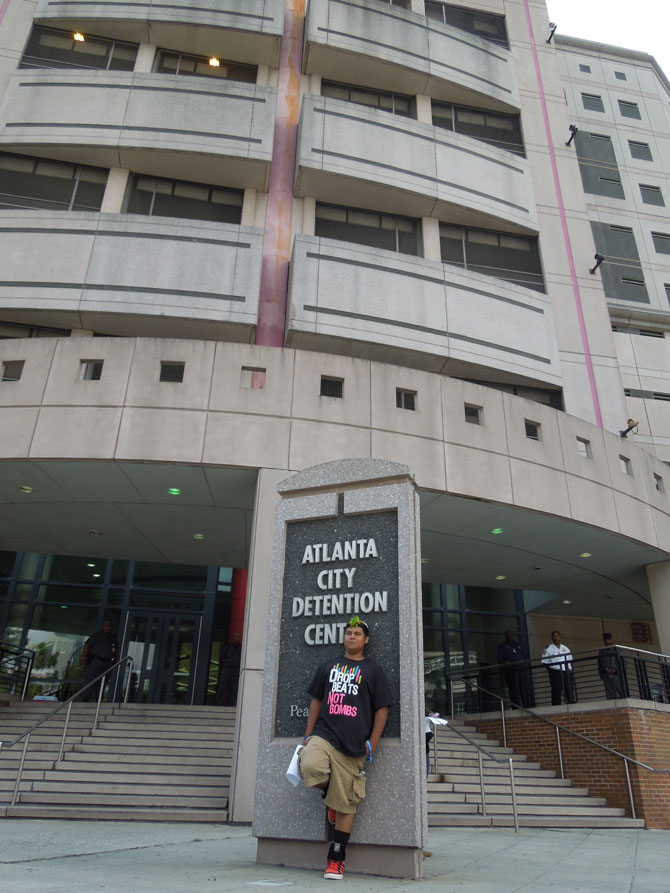 â€œThe biggest fear is losing our families or being deported and leaving our families behind,” Mendoza says. â€œMany adults that have citizen children can lose their kids. Many kids feel like their parents are not coming home, which is a very big fear… We always have to watch out. We have to be extra careful.â€

Lawsuits against state illegal-immigration laws are snaking their way through the courts. The U.S. Supreme Court struck down three provisions of Arizonaâ€™s law in June, including the requirement that legal immigrants carry documentation at all times, the right of a police officer to make an arrest without a warrant, and a ban on illegal immigrants seeking employment. Last month, a federal appeals court blocked much of Georgia’s law, including a ban on transporting or harboring illegal immigrants, but upheld a provision allowing law enforcement to check immigration documents when they stop suspects. In a similar case, the court found that Alabamaâ€™s requirement that newly enrolled K-12 students provide documentation was in violation of the Equal Protection Clause and could interfere with childrenâ€™s constitutional right to education.

In all three cases, however, the courts have upheld the controversial â€œshow me your papersâ€ provisions of these anti-immigrant laws. Human rights organizations like the ACLU and the Southern Poverty Law Center say those laws encourage racial profiling. But opponents of the â€œshow me your papersâ€ sections of the laws remain optimistic because they haven’t yet made the argument in court that these laws will promote racial profiling. â€œThe court explicitly left the door open to further challenges against the â€˜show me your papersâ€™ provision, which we will continue to fight in order to protect peopleâ€™s constitutional rights,â€ says Omar Jadwat, senior staff attorney with the ACLU Immigrantsâ€™ Rights Project.

DACA also means that young illegal immigrants might once again have the opportunity to attend UGA.

University System of Georgia Board of Regents policy 4.1.6 made headlines when it went into effect last October. It forbids anyone who is not â€œlawfully presentâ€ in Georgia from applying to colleges and universities with selective enrollmentâ€”including the University of Georgia, Georgia Tech, Georgia State University, Georgia Health Sciences University and Georgia College & State Universityâ€”where they might take the place of a citizen or legal immigrant.

Public universities accept several different forms of documentation as proof of lawful presence, including a valid Georgia driverâ€™s license issued after Jan. 1, 2008. After U.S. Citizenship and Immigration Services opened the application process for the deferred action program, Georgiaâ€™s Attorney General, Sam Olens confirmed that anyone with deferred action under the Obama administration policy could apply for a Georgia driverâ€™s license. Arizona Gov. Jan Brewer, in contrast, has ordered her stateâ€™s agencies to deny driver’s licenses and other public benefits to young undocumented immigrants who obtain deferred action status. This is likely to include higher educational benefits like in-state tuition and even the ability to apply for college.

However, here in Georgia, â€œone might be able to assume that if such a student applied to [a selective college] and presented a driver’s license, they would have their lawful presence verified,â€ says Catmur. With the DACA program, undocumented students would be eligible to apply to the forbidden five colleges and universities in Georgia.

Catmur recognizes the possibility that the â€œGeorgia state legislature is going to say â€˜Weâ€™re not comfortable with this,'” though. “The reason the board (of regents) set this policy is to make sure that [at] the selective schools in Georgia, the seats went to students who were legally in the country,â€ she says. The legislature could pass a law that challenges the new found right to education of Georgiaâ€™s undocumented youth, or the regents could modify their policy to explicitly exclude students approved for deferred action from applying to selective schools.

No Papers, No Fear

On Aug. 24, a bus full of undocumented immigrants arrived in front of the Atlanta Detention Center. The mothers, fathers, children and students on the â€œUndocuBusâ€ were not there to be deported, but instead stopping by on their journey from Arizona to the Democratic National Convention in Charlotte, NC. The Georgia Undocumented Youth Alliance believes that actions by undocumented students, like â€œcoming outâ€ about their status, have prompted change such as DACA, and they are looking to mobilize all undocumented immigrants to â€œchallenge the champions of hate.â€

Yovanny Diaz, a 21-year-old GUYA member from Roswell and a student at Athensâ€™ Freedom University, which currently offers free, college-level courses to anyone regardless of immigration status, joined the riders a week before their visit to the prison. He â€œthought it was necessaryâ€ to ride the bus â€œbecause there are a lot of people that are suffering from unjust laws and people need to act. If not me, then who?â€

Diaz and GUYA continue to fight for the right to higher education. Not only does Georgia limit undocumented studentâ€™s access to college, but a 2007 state law explicitly prohibits undocumented immigrants from receiving in-state tuition if they live in Georgia. â€œI think I’ve learned more [attending Freedom University] than I did in high school, because I actually want the education,â€ Diaz says. â€œIn high school, I thought I wouldn’t be able to go to college, and I kind of went into zombie mode, but now I’m more motivated than I’ve ever been.â€

Diaz is eligible for DACA and plans to apply, but he had reservations when Sec. of Homeland Security Janet Napolitano first announced the program. â€œI had doubts because I saw it as a political move,” he says. â€œBut [DACA] has given me the liberty to come out more [about being undocumented] and to not be so afraid. We should be a little afraid, but there is also courageâ€”courage is doing what you’re afraid of.â€

When they arrived at the DNC two weeks later, 10 UndocuBus riders, including Diaz, were arrested for blocking an intersection and refusing to move. The group was there to ask the president for meaningful immigration reform and to call on his administrationâ€”an administration that has deported more than 1 million peopleâ€”to be on the â€œright side of history.â€ Because of the demonstrators’ immigration status, they faced the threat of deportation under the federal 287(g) program that trains local police to enforce federal immigration laws. But due to the efforts of supporters who quickly launched a calling campaign to Immigration and Customs Enforcement, all 10 riders were released the following morning.

Just hours after the protesters were released, an activist for the DREAM Actâ€”a step up from deferred action that would provide a path to citizenshipâ€”became the first undocumented immigrant to address a national political convention. Diaz attributes DACA to the work of the DREAMers and other activists.

â€œWe know that an organized community is a strong community,â€ says Diaz. â€œMovements, actionsâ€”that is how things change.â€