A Sea of C-Notes 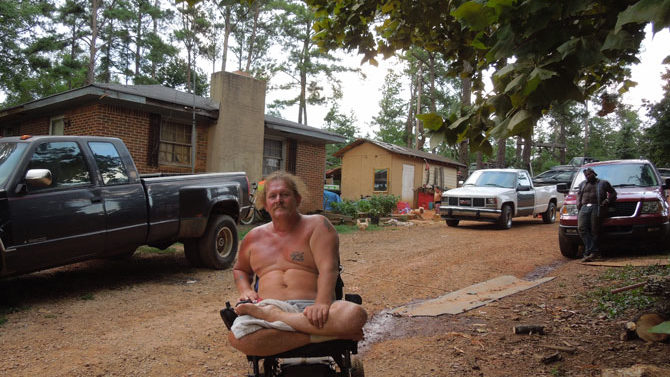 Social Circle: The country roads outside this Walton County town are lined with new McMansions that, one day, will be on lakefront property.

Down a steep hill into a valley is an old brick home surrounded by dogs and chickens. The small house is where John Oglesby lives and works as a car mechanic.

â€œ[In] 1969, this house was built, my mama and daddy built it, and I got to pick my own room,” he says. “It’s the room I’ve lived in for 40 years, after we moved from Social Circle project housing.â€

The place Oglesby calls home will one day sit at the bottom of a 95-foot-deep man-made lake, if Walton and Oconee counties’ Hard Labor Creek Reservoir moves ahead. Oglesby, owner of some of the land that must be purchased before construction can begin, is dead set against the project. He believes it’s funneling tax dollars to construction firms and real estate investors who will profit from the new reservoir.

â€œEvery four years, somebody’s getting re-elected, and the ones before that done put money in their pocket, [but] they ain’t put none in mine,â€ he says.

Oglesby isn’t the only one who’s skeptical of the reservoir. A recent report by the environmental group American Rivers calls the project’s estimated $350 million price tag into question, as well as whether it’s needed at all, since growth has slowed in the region. Besides the effects on people who will have to leave their homes, the risks of taking on so much debt puts all residents of Walton and Oconee counties on the hook. American Rivers says the risks are unnecessary because optimizing existing infrastructure and implementing conservation measures like Athens-Clarke County’s outdoor watering restrictions would be more cost-effective solutions to water supply issues. It endangers the Oconee River system, and the water it stores might not even end up in Northeast Georgians’ taps.

A River in Peril

As the U.S. reels from the hottest July on record, Athenians will remember the strict water conservation measures and anxiety of 2007 when an extreme drought meant the city would run out of water in as little as six weeks. Five years later, despite record-breaking heat, low river flows in the Oconee and a shrinking reservoir supply, the state has yet to declare drought in Clarke or any of Georgia’s 158 other counties, even though the U.S. Department of Agriculture has declared nearly all of them disaster areas due to the heavy burden drought has put on farmers. 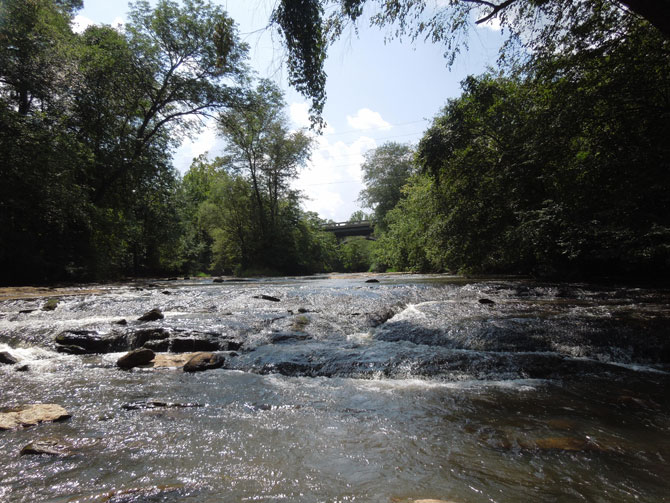 The Apalachee River at the future intake for the proposed Hard Labor Creek Reservoir near the Walton-Oconee county line.

Â Local conservation efforts are saving two million gallons of water per day in Athens, according to utility officials, but Oconee River flows remain cause for concern. In 2011, a proposed coal-fired power plant in Washington County led the Southern Environmental Law Center to name the Oconee River one of the â€œTop Ten Most Endangered Placesâ€ in the South. Another recent report by the Union of Concerned Scientists called the Upper Oconee River basin one of the 25 most threatened watersheds in the country.

Athens residents usually get their water directly from the North and Middle Oconee rivers, but when they get too low, the city turns to Bear Creek Reservoir, a regional partnership among Athens-Clarke, Oconee, Barrow and Jackson counties. While the Upper Oconee Basin Water Authority was able to fill Bear Creek Reservoir after a few downpours this summer, the Middle Oconee River that feeds it has run as low as 7 percent of its average flow, hitting a record low in early July. It’s hard to be a fish, turtle, otter, dragonfly or aquatic plant when the river is nearly dry. Hard Labor Creek Reservoir would draw even more water from the Oconee systemâ€”up to 42 million gallons per day. The 1,400 acre lake would be surrounded by 35 miles of shoreline and a boast a storage capacity of 12 billion gallons, according to project proposals and permits.

First discussed in the early 1990sâ€”another time of droughtâ€”the Hard Labor Creek reservoir was initially estimated to cost $40 million, according to American Rivers. That figure could reach $420 million by the time it’s completed, the group says.

The U.S. Army Corps of Engineers granted Oconee and Walton counties a permit to start construction in 2004. Initial population projections predicted an imminent water shortage. But the post-2007 housing market slump resulted in far less growth than anticipated. In 2008, progress on the reservoir slowed due to the changes in the projected population growth and financial necessity.

â€œWhen they pulled up the reins in ’08, I don’t know that they really changed any numbers in their planning in terms of their population projections,â€ says Ben Emanuel, a former Flagpole editor and now associate director of water supply at American Rivers. â€œWhat did change is that they knew they couldn’t pay the debt service if they took on any more debt, so they changed the construction schedule.â€ 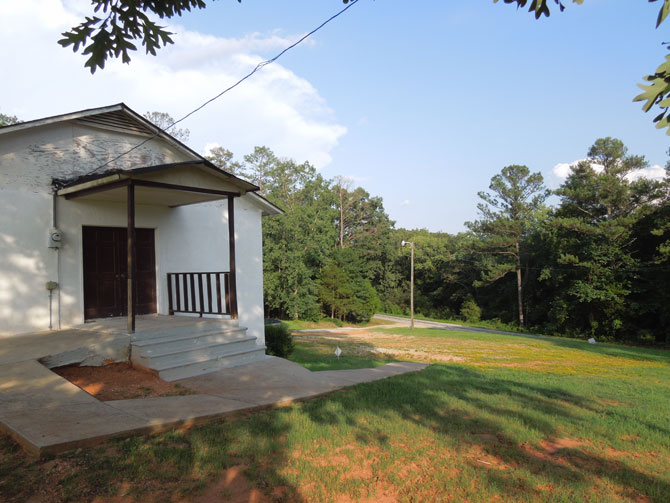 Harvest Tabernacle Christian Church is planning to move when Hard Labor Creek Reservoir is built. Several gravesites will have to be moved as well.

Acknowledging the inaccuracy of those initial population figures, Oconee County Chief Financial Officer Jeff Benko describes the delay as a conservative financial decision. â€œWhat happened was, like with any other project of this magnitude, if you’re good managers and stewards of the taxpayers’ money, you need to adjust your timeline,” he says. “We were building X amount of homes but, lo and behold, everybody got hit by the recession. We thought around 2014, 2015, 2016 was when we were going to have a water shortage at the growth rates we were doing in the early 2000s. We had to plan for it. Because of the recession, we’ve slowed the project down.â€ Benko hopes the project will enable economic growth in the region, citing the forthcoming Caterpillar plant opening.

After eight years, Walton County has sold $40 million in bonds, and Oconee County, which became a partner in 2007, has gone $19.5 million into debt to buy land and acquire permits from the Army Corps and the Georgia Environmental Protection Division. In addition, the Georgia Environmental Finance Authority, under a $300 million program Gov. Nathan Deal created in 2011, awarded the counties two loans totaling $32 million earlier this year to build a 100-foot-high dam and an intake and pump station on the Apalachee River, about 13 miles from the proposed reservoir. The terms of the loansâ€”1 and 2 percent interest rates, with no payments due for 40 yearsâ€””are unbelievable for both of the counties involved,â€ Benko says.Â

Where Will the Water Go?

â€œI think Hard Labor as a project has always looked good in the eyes of the Governor’s Water Supply Program because it’s the only reservoir proposal hanging out there across North Georgia that already has its permits,â€ Emanuel says. At the same time, for Oconee and Walton counties, the possibility of pumping water west towards Atlanta is even more of a reason to take on the risk of financing such a large project.

Significantly, because the Ocmulgee and Oconee rivers join miles downstream to form the Altamaha, the state would not consider this an inter-basin transfer, even though it would mean taking water from the already-stressed Oconee basin and transferring it to communities whose water distribution systems release into the Ocmulgee.

The communities that have â€œprecious commoditiesâ€ such as water â€œwill lead the state in recovery,â€ Benko says. But if the water customers aren’t there in Walton and Oconee, Benko says, â€œI think it positions us very well” in the tri-state water war among Georgia, Alabama and Florida. Former Gov. Sonny Perdue’s Water Contingency Task Force’s 2009 report highlighted Hard Labor Creek as a way to alleviate metro Atlanta’s water shortages.

Â No matter how fast the region ends up growing, Hard Labor Creek Reservoir is expected to move forward soon. The project’s regional board is hoping to finalize loan terms on Aug. 21, so the Walton and Oconee county commissions can vote next month to move ahead on the next phase of construction. If growth doesn’t come, the reservoir’s water could be sold to metro Atlanta to recoup the cost of the pricey project. “Raw water is a commodity,â€ Benko says.