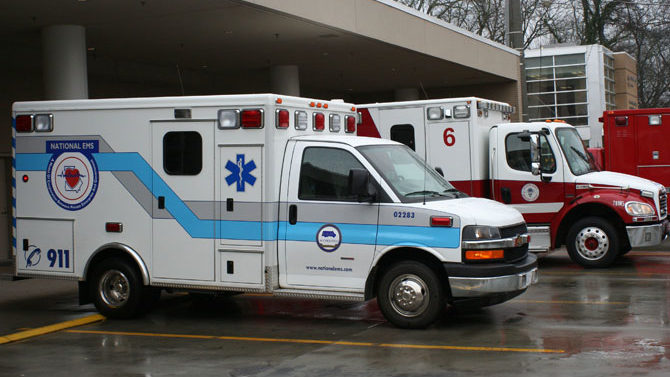 The bicyclist was struck from behind as he rode down Milledge Avenue in the early morning hours of Feb. 15. The truck continued another two blocks, dragging the bike with it, according to police reports, before the driver turned around, called 911 and administered CPR to the rider.

National EMS, the official ambulance service for Athens-Clarke and Oconee counties, was notified of the accident at 2:48 a.m. and arrived on the scene at 3 a.m., according to the accident report. The cyclist arrived at Athens Regional Medical Center, less than two miles away, at 3:14 a.m. A week later, he remained in a coma from an accident that took place five blocks from Athens-Clarke’s Fire Station No. 3 on South Milledge Avenue. But because firefighters don’t respond to emergency medical calls, it was only the National ambulance, responding from the company’s main office on Macon Highway about three miles away, that could come to the cyclist’s aid.

The incident underscores what some say is a basic design flaw in the county’s emergency management system. Historically a task split by Athens Regional Medical Center and St. Mary’s Hospital (and even before that, by local funeral homes), the ambulance service was contracted to the family-owned National EMS in 2009. As a result, the private company operates its own fleet of ambulances from five locations across Clarke and Oconee counties. It is the only ambulance service in the two counties authorized to respond to 911 emergency calls, but to help offset its costs, National also may pick up non-emergency transports when an ambulance crew isn’t on a call.

The original three-year contract officially rolls over into its one-year extension on Mar. 1. The coming year, hospital and local government officials say, will likely bring an examination of the EMS servicesâ€”although there are no plans, at this point, to make any changes.

“We have a model in place that has worked for decades, and we’re trying to utilize the best components of that going forward,” said Athens-Clarke County Manager Alan Reddish, citing the role the two hospitals have had in running EMS services. “From a local government perspective, that has worked well. To assume there should be a dramatic change in that structure relative to the services that are being provided would not be [correct]. We are happy with the process that’s in place.”

David Brooks, an Athens resident who runs the long-distance medical transport company Ameritrans, said he’s concerned about the county’s ambulance service simply because he has kids who may one day rely on the service. His company does not compete with local medical transportation companies, he said, but he’s spent decades working in the field and was familiar with the county’s ambulance service when it was run by the hospitals. There are three main types of EMS service that can be provided, he said: a separate county-run emergency service, an EMS that’s combined with fire services, or a private company.

“Or then, you have what we had for years, with the two hospitals running a service; they were private but they had trucks dedicated to emergencies,” he said. “There’s nothing wrong with a private company making a profitâ€¦ but now, the scary thing is, the citizens have no idea what the response times are or when they run out of ambulances.”

Officials with National said they haven’t received any major complaints from the local EMS oversight committee, made up of a collection of representatives from the two hospitals and the county. That has a lot to do with the company’s average response time of less than seven minutes per emergency call, said Robby Atkins, National’s director of operations. In Athens-Clarke County, the company is required to have an average response time of less than eight minutes, 59 seconds; in Oconee, the average time needs to be less than 12 minutes, 59 seconds.

When the hospitals ran the EMS service, they only responded to emergencies; any non-emergency medical transportâ€”from the hospital to a home, or from one hospital to another, for exampleâ€”was handled by other medical transport companies. National, which responded to 16,191 calls in Clarke and Oconee counties last year, also performed 2,691 routine or critical care transports, according to Don Cargile, National’s director of marketing and himself a veteran of St. Mary’s Hospital’s former ambulance service. It’s those non-emergency transports that keep the business model working, National officials say, because the 911 calls don’t pay the bills.

“Thirty percent of all 911 calls we respond to, we do not transport,” Atkins said. “So, that’s 30 percent extra resources we have to have available 24/7. That’s across the board, across the stateâ€”the more urban you get, the higher [non-transport rate] you get. We have ‘frequent fliers’â€¦ who may be 1 to 2 percent of our costs.”

Because of the expense involved in responding to 911 callsâ€”not to mention equipping trucks with medical gearâ€”National receives a subsidy from the two hospitals based on its losses. The subsidy started at $400,000 per year, split between the two hospitals, according to Dee Burckett, vice president for professional services at Athens Regional. Because National reported greater losses in the years since its contract took effect, that subsidy has risen to $440,000. But that loss does not reflect any income generated from non-emergency calls.

Burckett said when National’s contract goes into its one-year extension, it will be a time for the county and the hospitals to reassess the service. Unlike fire and police protection, there is no state mandate for a county to provide EMS service. Georgia’s Department of Public Health oversees an Emergency Medical Services Division that regulates licensing and training of EMTs and first responders, with the mission to “encourage, foster and promoteâ€¦ an optimal system of emergency medical and trauma care.” With no specific mandate, new options could come to the table when the contract expires next year.

“The question before us now is whether we continue to stay involved, or terminate the contract and let the Georgia EMS system take over,” Burckett said. “We haven’t reached a decision yet as to what the future will look like. Athens-Clarke and Oconee have a tradition and it is unusual for a hospital to provide the service.”

Reddish said combining EMS with fire services, or bringing it in under the wing of the county, is out of the question unless the public is willing to have a serious discussion about money.

“You don’t just take the number of firefighters you have and train them,” he said. “This could require additional staffing and the purchase of very expensive vehicles. We would have to get into a very large capital program to do that; employ additional staff to do that. We would have to house them somewhere, and our fire stations were not built to house another EMS service. If circumstances change, we’ll look at the most viable options we have. We certainly would look at all the options, should we be required to do so. But right now, we like what we have.”

But Brooks said he thinks it can be better. “The best solution, as far as safety, is for the fire department to take it over,” he said. “But, obviously, we’d have to pay for that.”